As Haiyan batters the Phillipines, the political elites at the UN climate talks will again leave poor countries to go it alone 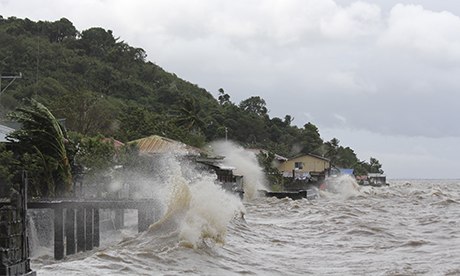 I met Naderev Saño last year in Doha, when the world’s governments were meeting for the annual UN climate talks. The chief negotiator of the Filipino delegation was distraught. Typhoon Bopha, a category five “super-typhoon” with 175mph winds (282km/h) had just ripped through the island of Mindanao. It was the 16th major storm of the year, hundreds of thousands of people had lost their homes and more than 1,000 had died. Saño and his team knew well the places where it had hit the hardest.

“Each destructive typhoon season costs us 2% of our GDP, and the reconstruction costs a further 2%, which means we lose nearly 5% of our economy every year to storms. We have received no climate finance to adapt or to prepare ourselves for typhoons and other extreme weather we are now experiencing. We have not seen any money from the rich countries to help us to adapt … We cannot go on like this. It cannot be a way of life that we end up running always from storms,” he said. He later told the assembly: “Climate change negotiations cannot be based on the way we currently measure progress. It is a clear sign of planetary and economic and environmental dysfunction … The whole world, especially developing countries struggling to address poverty and achieve social and human development, confronts these same realities.

“I speak on behalf of 100 million Filipinos, not as a leader of my delegation, but as a Filipino …” At this point he broke down.

Saño was uncontactable today, because phone lines to Manila were down, but he was thought to be on his way to Warsaw for the UN talks, which resume on Monday. This time, with uncanny timing, his country has been battered by the even stronger super-typhoon Haiyan, one of the most powerful ever recorded anywhere – 25 miles (40km) wide and reaching astonishing speeds of possibly 200mph (322km/h).

We don’t yet know the death toll or damage done, but we do know that the strength of tropical storms such as Haiyan or Bopha is linked to sea temperature. As the oceans warm with climate change, there is extra energy in the system. Storms may not be increasing in frequency but Pacific ocean waters are warming faster than expected, and there is a broad scientific consensus that typhoons are now increasing in strength.

Typhoon Haiyan, like Bopha, will be seen widely in developing countries as a taste of what is to come, along with rising sea levels and water shortages. But what alarms the governments of vulnerable countries the most is that they believe rich countries have lost the political will to address climate change at the speed needed to avoid catastrophic change in years to come.

From being top of the global political agenda just four years ago, climate change is now barely mentioned by the political elites in London or Washington, Tokyo or Paris. Australia is not even sending a junior minister to Warsaw. The host, Poland, will be using the meeting to celebrate its coal industry. The pitifully small pledges of money made by rich countries to help countries such as the Philippines or Bangladesh to adapt to climate change have barely materialised. Meanwhile, fossil fuel subsidies are running at more than $500bn (£311bn) a year, and vested commercial interests are increasingly influencing the talks.

As the magnitude of the adverse impacts of human-induced climate change becomes apparent, the most vulnerable countries say they have no option but to go it alone. The good news is that places such as Bangladesh, Nepal, the small island states of the Pacific and Caribbean, and many African nations, are all starting to adapt their farming, fishing and cities.

But coping with major storms, as well as sea level rise and water shortages, is expected to cost poor countriues trillions of dollars, which they do not have. “Time is running out,” Saño told the world last year. “Please, let this year be remembered as the year the world found the courage to take responsibility for the future we want. I ask of all of us here, if not us, then who? If not now, then when? If not here, then where?”

Is Climate Change Worth the Existential Fuss?Prev
Climate experts to enviros: “The time has come” to embrace nuclear powerNext