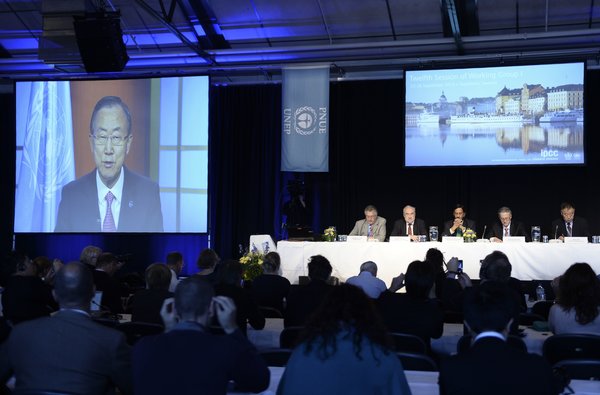 STOCKHOLM — The world’s top climate scientists on Friday formally embraced an upper limit on greenhouse gases for the first time, establishing a target level at which humanity must stop spewing them into the atmosphere or face irreversible climatic changes. They warned that the target is likely to be exceeded in a matter of decades unless steps are taken soon to reduce emissions.

Articles in this series focus on the central arguments in the climate debate and examine the evidence for global warming and its consequences.

Unveiling the latest United Nations assessment of climate science, the experts cited a litany of changes that were already under way, warned that they were likely to accelerate and expressed virtual certainty that human activity is the main cause. “Climate change is the greatest challenge of our time,” said Thomas F. Stocker, co-chairman of the Intergovernmental Panel on Climate Change, the United Nations-sponsored group of scientists that produced the report. “In short, it threatens our planet, our only home.”

The panel, in issuing its most definitive assessment yet of the risks of human-caused warming, hoped to give impetus to international negotiations toward a new climate treaty, which have languished in recent years in a swamp of technical and political disputes. The group made clear that time was not on the planet’s side if emissions continued unchecked.

The new report is a 36-page summary for world leaders of a 900-page report that is to be released next week on the physical science of climate change. That will be followed by additional reports in 2014 on the most likely impacts and on possible steps to limit the damage. A draft of the summary leaked last month, and the final version did not change greatly, though it was edited for clarity.

Going well beyond its four previous analyses of the emissions problem, the panel endorsed a “carbon budget” for humanity — a limit on the amount of the primary greenhouse gas, carbon dioxide, that can be produced by industrial activities and the clearing of forests. No more than one trillion metric tons of carbon could be burned and the resulting gases released into the atmosphere, the panel found, if planetary warming is to be kept below 3.6 degrees Fahrenheit (2 degrees Celsius) above the level of preindustrial times. That temperature is a target above which scientists believe the most dangerous effects of climate change would begin to occur.

Just over a half-trillion tons have already been burned since the beginning of the Industrial Revolution, and at the rate energy consumption is growing, the trillionth ton will be burned sometime around 2040, according to calculations by Myles R. Allen, a scientist at the University of Oxford and one of the authors of the new report. More than three trillion tons of carbon are still left in the ground as fossil fuels.

Once the trillion-ton budget is exhausted, companies that wanted to keep burning fossil fuels would have to come up with ways to capture carbon dioxide and store it underground. In the United States, the Obama administration is moving forward with rules that would essentially require such technology, which is likely to be costly, for any future coal-burning power plants; the president’s Republican opponents have accused him of waging a “war on coal.”

The Intergovernmental Panel on Climate Change is a worldwide committee of hundreds of scientists that issues major reports every five or six years, advising governments on the latest knowledge on climate change.

The group has now issued five major reports since 1990, each of them finding greater certainty that the world is warming and greater likelihood that human activity is the chief cause. The new report finds a 95 to 100 percent chance that most of the warming of recent decades is human-caused, up from the 90 to 100 percent chance cited in the last report, in 2007.

But the new document also acknowledges that climate science still contains uncertainties, including the likely magnitude of the warming for a given level of emissions, the rate at which the ocean will rise, and the likelihood that plants and animals will be driven to extinction. The scientists emphasized, however, that those uncertainties cut in both directions and the only way to limit the risk is to limit emissions.

Climate-skeptic organizations assailed the new report as alarmist even before it was published.

The Heartland Institute, a Chicago organization, issued a document last week saying that any additional global warming would likely be limited to a few tenths of a degree and that this “would not represent a climate crisis.”

One issue much cited by the climate doubters is the slowdown in global warming that has occurred over the past 15 years. The report acknowledged that it was not fully understood, but said such pauses had occurred in the past and the natural variability of climate was a likely explanation.

“People think that global warming means every year is going to be warmer than the year before,” said Gerald A. Meehl, an American scientist who helped write the report. “It’s more like a stair-step kind of thing.”

Climate scientists not involved in writing the new report said the authors had made a series of cautious choices in their assessment of the scientific evidence. Regarding sea level rise, for instance, they gave the first firm estimates ever contained in an intergovernmental panel report, declaring that if emissions continued at a rapid pace, the rise by the end of the 21st century could be as much as three feet. They threw out a string of published papers suggesting a worst-case rise closer to five feet.

Similarly, the authors went out of their way to include recent papers suggesting that the earth might be less sensitive to carbon dioxide emissions than previously thought, even though serious questions have been raised about the validity of those estimates.

The new report lowered the bottom end of the range of potential warming that could be expected to occur over the long term if the carbon dioxide level in the atmosphere were to double, reversing a decision that the panel made in the last report and restoring a scientific consensus that had prevailed from 1979 to 2007. Six years ago, that range was reported as 3.6 to 8.1 degrees Fahrenheit; the new range is 2.7 to 8.1 degrees.

In Washington, President Obama’s science adviser, John P. Holdren, cited increased scientific confidence “that the kinds of harm already being experienced from climate change will continue to worsen unless and until comprehensive and vigorous action to reduce emissions is undertaken worldwide.”

Ban Ki-moon, the United Nations secretary general, spoke to delegates at the meeting on Friday by video link, declaring his intention to call a meeting of heads of state in 2014 to push such a treaty forward. The last such meeting, in Copenhagen in 2009, ended in disarray.