We are underestimating climate change and underfunding innovation

The destructive power of extreme weather events, such as the Calgary floods, reduces our ability to invent, build and invest 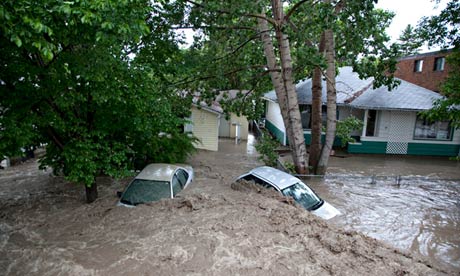 How can we fund our future if we are constantly remediating the destruction caused by extreme weather events? Photograph: Jordan Verlage/AP

Sustainability has become a race between two kinds of destruction. The destructive power of a changing climate reduces our economic activity and forces us to divert available funds toward remediation and repair, threatening our ability to incubate and fund ‘creative destruction‘, first named by Joseph Schumpeter. Creative destruction replaces the old and unsustainable with new products, services and processes of greater value.

By destroying what we have already built and forcing us to repair or write off old infrastructure, natural disasters undermine our ability to invest in the future. The increasingly frequent and severe natural disasters that climate change is causing threaten the innovation we so desperately need.

Climate change makes three demands on the capacity of businesses, governments and individuals to invest scarce resources. First, we must adapt our existing systems to the new climate, adding more robust power and cooling systems, redeveloping almost all of our agricultural processes, building new levees and barrier islands, clearing flood plains of development and resettling affected businesses and families.

Second, we must be prepared to write off or repair existing assets that will be damaged by storms, heat and drought, even as the insurance industry becomes more restrictive in its underwriting. Third, we must develop new technologies that will reduce and reverse our carbon emissions, a programme critical to our survival as a species. Every extreme weather event that causes damage costing billions to remediate diverts investment dollars away from productivity and into subsistence.

In late June, sudden storms and a saturated water table overwhelmed two great rivers of southern Alberta, the Bow and the Elbow, flooding the downtown core of Calgary.

It destroyed homes and businesses, forced the evacuation of tens of thousands and caused an estimated C$5bn in damage. A railway bridge collapsed under the weight of a cargo train, leaving carriages filled with toxic petroleum diluent dangling over the Bow River for nearly 24 hours. The disaster befell Calgary a week before the Stampede rodeo, which brings in C$340m annually.

For many years, reports and planning documents warned of the potential for extraordinary losses due to flooding. But Calgary has never fully addressed the risks inherent in building a downtown core in a flood plain.

The negative impact of the floods will be followed by insurance money, new mortgages and government disaster relief flowing into the areas most deeply affected. However, a great deal of value will have been written off, displacing investments in innovation.

In recent years, Calgary has built an infrastructure to promote entrepreneurship. Innovate Calgary is a massive organisation providing assistance to start-ups. Haskayne, the University of Calgary business school, offers an entrepreneurship and innovation concentration. Startup Calgary creates networks among high-tech business founders, and AcceleratorYYC provides incubator services. There’s a group for women entrepreneurs. Together, this infrastructure has produced Canada’s highest number of entrepreneurs per capita.

Many of these entrepreneurs have been creating greener alternatives, chasing the dream of a better future. They’ve built Twin Hills, a LEED-ND certified “next era” town, based in wetlands preservation and water and energy conservation, good public transit, reliable fibre optics, alternative energy use and entrepreneurial solutions. They have created green roofs and xeriscape garden installations. They are creating employee reward programmes that include green spending accounts. The Southern Alberta Institute of Technology is backing student-led innovations in green building technology.

As is true almost everywhere, the only limit seems to be funding. There are simply not enough high-risk, high-reward funding sources to bring great ideas to fruition as viable products or companies. And now the increasingly indebted Alberta government and its people must find billions of dollars to help rebuild what has been lost.

How can we fund our future if we are constantly remediating the destruction of our existing capital? If we are to reduce destruction of our capital due to climate-change related weather, we must identify and invest in the best new technologies and pursue them until they are viable.

The problem of extreme weather will only become more dangerous. It has already become commonplace, destroying crops, riverbanks, homes, towns, factories and offices. Insurance providers, whether governments or corporations, are less willing and able to underwrite risks and compensate policy holders.

Both natural and creative destruction make it clear that material objects – inventions, bridges, dams, early warning systems – are the building blocks of an economy. We must invent, build and invest in the ones that have the most value for our future. We cannot afford to do otherwise.

Find the latest jobs in your sector: