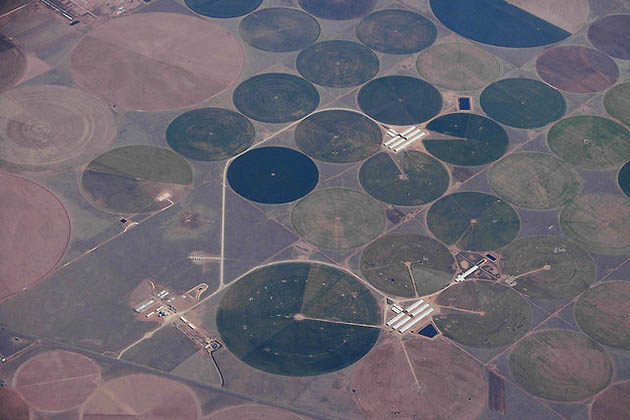 A new study from the US Geological Survey reveals that groundwater aquifers in the United States have been depleted at record high levels over the first decade of the 21st century, resulting both in a long term threat to water availability, particularly in major agricultural areas of the nation, as well as being a surprising contributor to global sea level rise.

The study examined groundwater depletion in the US from 1900-2008 (see image below), finding that there was a major increase in water withdrawal immediately after World War 2—the result of the rise of suburbia and national prosperity after the US was the last country standing. This was nothing in comparison to what happened from 2000-2008, though.

Looking at the Ogallala Aquifer, under 440,300 square kilometers in the middle of the nation’s prime agricultural land from South Dakota south to Texas, the groundwater depletion from 2000-2008 is roughly one-third of the entire depletion over the entire previous century. Since the 1940s, essentially since the beginning of what we’d now call industrial agriculture and intensive irrigation, the water table has fallen over 160 feet in places.

Making things worse, this area is smack dab in the middle of the some of the most-affected areas of multi-year drought. According to the latest info from US Drought Monitor, much of the area which the Ogallala Aquifer is under is either in extreme or exceptional drought (the highest levels) lasting well over six months. It is also the very area where the proposed Keystone XL tar sands pipeline would pass through, creating a very real threat to water supplies when a spill occurs—note, the use of ‘will’ is very purposeful; as recent events have shown it is not a question of if a pipeline will have an accident, but rather when.

What’s causing the record levels of water withdrawal? Reuters quotes Leonard Konikow of the USGS, who places the blame on a variety of factors, all linked to rising population levels: Agriculture is a major culprit, as is the energy industry; precipitation declines in both summer and winter, linked to climate change, have failed to replenish aquifers.

Though outside the scope of this particular report, similar conditions exist globally. In the past decade alone the world population was increased by one billion people. Since 1950, when water use first started really climbing in the US, global population has increase by nearly 4.5 billion people. If water levels continue to be depleted at such a fast rate, it looks increasingly likely that water will be the commodity we war over in the future.