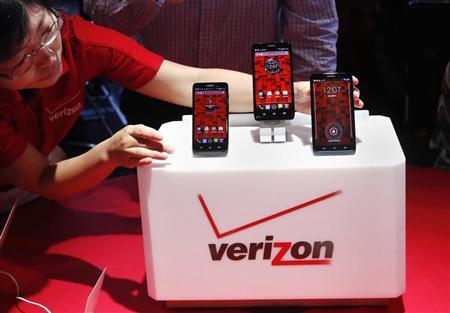 By Soyoung Kim and Kate Holton

(Reuters) – Verizon Communications and Vodafone plan to announce a $130 billion deal on Monday that will give the U.S. telecom giant complete control of Verizon Wireless, subject to final board approval, people familiar with the matter said.

Vodafone said in a statement late on Sunday it was in advanced talks with Verizon to sell its 45 percent stake in the joint venture for $130 billion, comprising cash and common shares, but that there was no certainty an agreement would be reached.

“A further announcement will be made as soon as practicable,” it said of the deal to exit the largest mobile operator in the U.S..

Under the terms of the proposed agreement, Vodafone would get $60 billion in cash, $60 billion in Verizon stock, and an additional $10 billion from smaller transactions that will take the total deal value to $130 billion, two of the people familiar with the matter said on Saturday.

To fund the cash portion of the deal, Verizon has lined up as much as $65 billion in financing from four banks: JPMorgan Chase & Co, Morgan Stanley, Barclays Plc and Bank of America Merrill Lynch, they said. The banks have committed to the financing which is expected be split evenly among the four, two people said.

closes in London on Monday, after the board of Verizon meets earlier in the day to vote on the proposed transaction, people familiar with the matter told Reuters.

Vodafone’s board was scheduled to meet on Sunday to approve the deal, the people said. Both groups declined to comment.

If the deal is concluded, it will end one of the longest-running corporate standoffs, which has at times seen both partners seek to buy out the other in times of weakness. For Verizon, it means that it no longer has to share the billions in cash generated by Verizon Wireless.

On the Vodafone side, Chief Executive Vittorio Colao will get a war chest of cash to reward shareholders and potentially carry out acquisitions to strengthen the group’s European and emerging market operations.

All the people asked not to be identified because the matter is not public.

An agreement over Verizon Wireless would mark the culmination of on-again, off-again discussions going as far back as 2004, when Vodafone bid for AT&T Inc’s wireless business in a move that would have required it to shed its Verizon Wireless stake.

The British company lost that bid and has since held on to the Verizon Wireless stake for its exposure to the highly profitable U.S. wireless market, saying it would only sell if Verizon offered a price that was more valuable to its shareholders than the status quo.

At $130 billion, it would be the third-largest corporate deal of all time.

A top 10 Vodafone investor told Reuters last week that $130 billion would be “a good price” that shareholders would welcome.

“Colao’s done a good job over the last five years. He’s done well not to have sold the U.S. sooner. There were people calling for him to sell the U.S. business three or four years ago and clearly it’s been the right thing to do not to do that because it’s grown in value hugely over that time.

“Taking the big picture, I think the management has done a good job and if they get the mooted price for Verizon they’ll be treated as heroes.”

Talks picked up in earnest a few weeks ago, as Verizon grew concerned that its window of opportunity was closing, with interest rates due to rise and its own stock price declining.

That prompted Verizon to raise the offer price from the $100 billion it had initially floated to around $130 billion, sources have said.

Even after the bump in price, the deal is expected to be accretive to Verizon’s earnings, one of the sources said.

Another hindrance to a deal has been the possibility of a huge tax bill for Vodafone from the sale, based on Verizon Wireless’ massive growth since it was established. But the sources said the deal would be structured in such way that Vodafone’s tax bill could be cut to around $5 billion.

A deal would add to the spate of telecom acquisitions this year in Europe and the U.S.. Most recently, Japan’s SoftBank Corp took control of Sprint Nextel Corp, the No. 3 U.S. wireless provider, in a $21.6 billion deal that could make the U.S. market more competitive.

Although overall M&A activity remains lower than last year at this time, the telecom sector has been a bright spot of deal-making. According to Thomson Reuters data

, telecom deals were up 36 percent this year, with 358 deals worth $60.9 billion, not including the potential Verizon-Vodafone deal.

The scuttlebutt (talk around the water cooler) says that an impending war with Syria will endanger the world’s oil supply. Many people are assuming that this is because Syria’s oil will go offline to the rest of the world.Prev
Red Cross responds as severe flooding takes its toll in the Sahel ReportNext