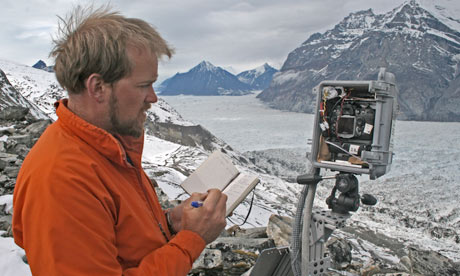 Last July, a record melting occurred on the Greenland ice sheet. Even in some of the highest and coldest areas, field parties observed rainfall with air temperatures several degrees above the freezing point. A month before, it was as though Greenland expert Jason Box had a crystal ball; he predicted this complete surface melting in a scientific publication. Box’s research then got broader public visibility after climate activist and writer Bill McKibben covered it in Rolling Stone magazine.
The basic premise of Box’s study was that observations reveal a progressive darkening of Greenland ice. Darkening causes the white snow surface to absorb more sunlight which in turn increases melting. Given that this process is likely to continue, the impact on Greenland melt, and subsequent sea level rise, will be profound.

There are several mechanisms that are known to darken arctic ice, including desert dust, pollen, soot from natural forest fires, and human biomass burning for land clearing and domestic use. Industrial, shipping, and aircraft pollution also play a role. Some of these effects are increasing. As climate change accelerates, more areas are being burned by wildfire each year. Box wondered how much increasing wildfires with resulting soot landing on the northern ice might amplify what scientists call a “positive feedback” – a self-reinforcing cycle – increasing Greenland melting. The cycle starts with initial warming, leading to more fires, more soot, and in turn more warming and more melt. The feedback is important, particularly in polar regions where observed warming is twice the rate of more southerly locations around the globe. Box calculates this effect has doubled Greenland surface melting since year 2000.

The topic has become hot among ice experts as new observations of ice melt continue to outstrip projections from just a few years ago. Arctic sea ice, another key measure of global heating, is now 60 years ahead of worst-case projections from the last report by the Intergovernmental Panel on Climate Change in 2007. Arctic snow cover on land has also been declining more rapidly than projected, even faster than sea ice. While mass loss of the enormous Greenland sheet is difficult to measure, satellite data indicate it has doubled in the last decade. If this acceleration continues, sea level rise could be even higher this century than the 1 or 2 meters that mainstream scientists now project – possibly much higher. Despite a recent study that projected Greenland outflow glaciers to slow, surface melting has increased faster than ice flow. The albedo feedback is a critical piece of physics that enables surface melting to continue dominating the loss.

To test his hypothesis, Box has assembled a team of scientists and communicators to collect and analyze samples from key locations on the ice sheet, and report those results directly to the public. The plan is to arrive in Greenland in late June, just as the peak melting season and fire season coincide. Box will be joined by Bill McKibben, who will be covering the research for Rolling Stone, and videographer Peter Sinclair, whose series of climate change videos on YouTube has gained high praise from climate scientists.

The scientific team includes Sara McKenzie Skiles, a researcher at UCLA and the NASA Jet Propulsion Laboratory, and Marek Stibal, a biogeochemist at the Geological Survey of Denmark and Greenland. Dr Stibal will be looking at yet another potential source of darkening, the activity of microorganisms that produce their own darkening pigments, which may be increasing due to atmospheric warming and fertilization by pollutants.

While government funding contracted, Box decided to push forward with a new approach, financing the research as a “citizen science” initiative, funded by internet crowd sourcing. His project is aptly named DARK SNOW and financial support is being collected online.

It is exciting to watch emerging science collide with novel scientific fundraising initiatives. It is possible that this emergence will grow in the coming years as scientific projects grow in cost and complexity, while more traditional funding sources diminish. The costs of funding projects like DARK SNOW are miniscule compared to the costs we endure from climate-change-related weather disasters. The penny-wise pound-foolish attitude we’ve taken toward science funding is a complicated issue that I’ll deal with in a future post.