Why libertarians must deny climate change, in one short take

Why libertarians must deny climate change, in one short take 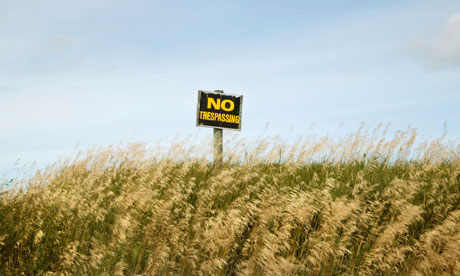 Over the Christmas break I read what I believe is the most important environmental essay of the past 12 months. Though it begins with a mildly unfair criticism of a column of mine, I won’t hold it against the author. In a simple and very short tract, Matt Bruenig presents a devastating challenge to those who call themselves libertarians, and explains why they have no choice but to deny climate change and other environmental problems.

Bruenig explains what is now the core argument used by conservatives and libertarians: the procedural justice account of property rights. In brief, this means that if the process by which property was acquired was just, those who have acquired it should be free to use it as they wish, without social restraints or obligations to other people.

Their property rights are absolute and cannot be intruded upon by the state or by anyone else. Any interference with, or damage to, the value of their property without their consent – even by taxation – is an unwarranted infringement. This, with local variations, is the basic philosophy of the Republican candidates, the Tea Party movement, the lobby groups that call themselves “free market thinktanks” and much of the new right in the UK.

It is a pitiless, one-sided, mechanical view of the world, which elevates the rights of property over everything else, meaning that those who possess the most property end up with great power over others. Dressed up as freedom, it is a formula for oppression and bondage. It does nothing to address inequality, hardship or social exclusion. A transparently self-serving vision, it seeks to justify the greedy and selfish behaviour of those with wealth and power.

But, for the sake of argument, Bruenig says, let us accept it. Let us accept the idea that damage to the value of property without the owner’s consent is an unwarranted intrusion upon the owner’s freedoms. What this means is that as soon as libertarians encounter environmental issues, they’re stuffed.

Climate change, industrial pollution, ozone depletion, damage to the physical beauty of the area surrounding people’s homes (and therefore their value) – all these, if libertarians did not possess a shocking set of double standards, would be denounced by them as infringements on other people’s property.

The owners of coal-burning power stations in the UK have not obtained the consent of everyone who owns a lake or a forest in Sweden to deposit acid rain there. So their emissions, in the libertarian worldview, should be regarded as a form of trespass on the property of Swedish landowners. Nor have they received the consent of the people of this country to allow mercury and other heavy metals to enter our bloodstreams, which means that they are intruding upon our property in the form of our bodies.

Nor have they – or airports, oil companies or car manufacturers – obtained the consent of all those it will affect to release carbon dioxide into the atmosphere, altering global temperatures and – through rising sea levels, droughts, storms and other impacts – damaging the property of many people. As Bruenig says:

“Almost all uses of land will entail some infringement on some other piece of land that is owned by someone else. So how can that ever be permitted? No story about freedom and property rights can ever justify the pollution of the air or the burning of fuels, because those things affect the freedom and property rights of others. Those actions ultimately cause damage to surrounding property and people without getting any consent from those affected. They are the ethical equivalent – for honest libertarians – of punching someone in the face or breaking someone else’s window.”

So here we have a simple and coherent explanation of why libertarianism is so often associated with climate change denial, and the playing down or dismissal of other environmental issues. It would be impossible for the owner of a power station, steel plant, quarry, farm or any large enterprise to obtain consent for all the trespasses he commits against other people’s property – including their bodies.

This is the point at which libertarianism smacks into the wall of gritty reality and crumples like a Coke can. Any honest and thorough application of this philosophy would run counter to its aim: which is to allow the owners of capital to expand their interests without taxation, regulation or recognition of the rights of other people.

Libertarianism becomes self-defeating as soon as it recognises the existence of environmental issues. So they must be denied.

New on the Left Flank: Free PDF version of On Utøya availablePrev
Renewables still have a long way to go to compete with fossil fuelsNext