If we don’t change prevailing business-as-usual political economies, probably – but we can still say ‘no’ and mean it 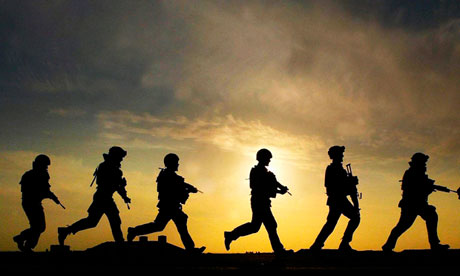 A new study published in the journal Science finds that climate change is strongly linked to human violence around the world. Based on more data than ever studied before – and looking at all major regions of the world from the United States to Somalia – the study unearthed a pattern of conflict linked to even minor climatic changes, including increased droughts or higher than average temperatures.

The study covered all major types of conflict, from the standard “Intergroup violence and political instability, like civil wars, riots, ethnic violence, and land invasions” to the less studied categories of “Personal violence and crime such as murder, assault, rape, and domestic violence” – and even covered: “Institutional breakdowns, such as abrupt and major changes in governing institutions or the collapse of entire civilizations.”

All three types of conflict exhibit “systematic and large responses to changes in climate, with the effect on intergroup conflict being the most pronounced”. In particular, the study found a positive relationship between high temperatures and greater violence.

With a business-as-usual scenario of CO2 emissions heading for a minimum 3-4 Celsius (C) rise in global average temperatures by as early as mid-century, the study’s findings suggest that violent conflict will get more pronounced for the foreseeable future if we don’t do something to mitigate climate change – in the study’s own words:

“… amplified rates of human conflict could represent a large and critical impact of anthropogenic climate change.”

But the big mystery is why?

“We can show that climatic events cause conflict, but we can’t yet exactly say why,” said lead author Dr Solomon Hsiang, an assistant professor at UC Berkeley’s Goldman School of Public Policy.

“Currently, there are several hypotheses explaining why the climate might influence conflict. For example, we know that changes in climate shape prevailing economic conditions, particularly in agrarian economies, and studies suggest that people are more likely to take up arms when the economy deteriorates, perhaps in part to maintain their livelihoods.”

Yet how firm are the study’s conclusions? A 2010 study in Proceedings of the National Academy of Sciences (PNAS), for instance, contradicted previous studies claiming that conflict in Africa was driven by climate change. The main driver of conflict, rather, has been poverty, economic inequalities, socio-political tensions, and ‘identity politics’ mobilising around ethnicity.

“Even if you found that conflict, defined in a particular way, appeared to be associated with climate, if you applied a number of complementary measures – which you should do in order to determine the robustness of the apparent connection – then you would find, in almost all cases, the two were actually unrelated.”

Dr Buhaug is deeply sceptical of the latest comprehensive study – which focuses entirely on quantitative analysis that excludes other complex social factors:

“I disagree with the sweeping conclusion (the authors) draw and believe that their strong statement about a general causal link between climate and conflict is unwarranted by the empirical analysis that they provide. I was surprised to see not a single reference to a real-world conflict that plausibly would not have occurred in the absence of observed climatic extremes. If the authors wish to claim a strong causal link, providing some form of case validation is critical.”

In reality, both approaches are flawed. While the new Science study focuses on correlations between climate change and different forms of violence without exploring the role of other social factors, the 2010 PNAS study dismissed too easily the role of climate change as a potential amplifier of such factors.

By demonstrating strong correlations between climate change and incidents of violence, the Science study makes a compelling case for a link between the two. But the elephant in the room is the authors’ inability to coherently explain why the two should be linked at all, beyond vague references to ‘the economy’ or ‘physiology’.

Missing from the analysis is the reality that climate change is always refracted through the complex socio-political, economic and cultural relations of different societies. It is precisely the way in which climate change might impact on those relations, and the way that those societies then choose to respond to those impacts, that determines the trajectory toward violence.

The PNAS study of conflict in Africa provides an important antidote to assuming that climate change in itself guarantees a rise in violence, by highlighting the political, economic and ideological complexity of African societies.

A fundamental issue is the new economy of war in which the impact of neoliberal capitalism and IMF-World Bank structural adjustment has devastated societies, ramping up infant mortality rates, widening inequalities, and entrenching regional states with unsustainable debt.

The result in many cases has been a rise in ‘identity politics’ – where the unravelling of communities in the face of mounting crises is exploited by political groups who project the cause of this unravelling against what is most easy and visible to oppose – ‘the Other’, whether defined by ethnicity, tribe, political affiliation, or simply location. In this way, economic and social dislocation can become refracted into war. Thus, by focusing only on climate change, the Science study obscures the entrenched national and global power disparities that play a central role in converting environmental-induced resources stressors into a propensity for violence.

Where the PNAS study falls short, however, is in recognising that climate change impacts play a key role in exacerbating the socio-political factors that might speed up this process of communal unravelling – whether by generating new resource challenges affecting food, water and energy that existing systems are ill-equipped to deal with, or by escalating natural disasters that destroy such systems altogether.

But in themselves such processes do not ‘necessitate’ conflict. The fact that they might end up resulting in violence more often than not, is a question of the nature of the political and economic systems at stake, and the choices that political and economic actors make in pursuit of narrow vested interests.

So will climate change trigger endless war? On a business as usual trajectory, quite probably. But not necessarily – we can say ‘no’.

Australia faces increased risk of disease from climate change, reports findPrev
KRudd: the secret weapon in my war on KevinNext