With CO2 Cuts Tough, U.S. and China Pledge a Push on Another Greenhouse Gas 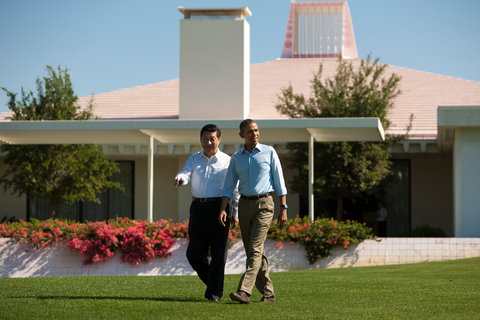 As some environmental analysts had hoped, President Obama and President Xi Jinping of China found room to maneuver on global warming in their California desert retreat. They sidestepped the super wicked issues impeding restrictions of the greenhouse gas of greatest concern, carbon dioxide, and staff released a joint statement on plans to cut releases of hydrofluorocarbons, or HFCs, a potent group of heat-trapping gases.

Below you can read the joint statement, followed by a link to a 2010 Times article showing how this action by the two nations is related not to the troubled 1992 United Nations climate treaty, but instead is an outgrowth of the 1987 Montreal Protocol, an accord originally aimed at controlling synthetic chemicals that were harming the atmosphere’s protective ozone layer:

Today, President Obama and President Xi agreed on an important new step to confront global climate change. For the first time, the United States and China will work together and with other countries to use the expertise and institutions of the Montreal Protocol to phase down the consumption and production of hydrofluorocarbons (HFCs), among other forms of multilateral cooperation. A global phase down of HFCs could potentially reduce some 90 gigatons of CO2 equivalent by 2050, equal to roughly two years worth of current global greenhouse gas emissions.

The agreement between the United States and China reads as follows:

Regarding HFCs, the United States and China agreed to work together and with other countries through multilateral approaches that include using the expertise and institutions of the Montreal Protocol to phase down the production and consumption of HFCs, while continuing to include HFCs within the scope of UNFCCC and its Kyoto Protocol provisions for accounting and reporting of emissions.

HFCs are potent greenhouse gases used in refrigerators, air conditioners, and industrial applications. While they do not deplete the ozone layer, many are highly potent greenhouse gases. Their use is growing rapidly as replacements for ozone-depleting substances that are being phased out under the Montreal Protocol on Substances that Deplete the Ozone Layer. Left unabated, HFC emissions growth could grow to nearly 20 percent of carbon dioxide emissions by 2050, a serious climate mitigation concern.

The Montreal Protocol was established in 1987 to facilitate a global approach to combat depletion of the stratospheric ozone layer. Every country in the world is a party to the Protocol, and it has successfully phased out or is in the process of phasing out several key classes of chemicals, including chlorofluorocarbons (CFCs), hydrochlorofluorocarbons (HCFCs), and halons. The transitions out of CFCs and HCFCs provide major ozone layer protection benefits, but the unintended consequence is the rapid current and projected future growth of climate-damaging HFCs.

For the past four years, the United States, Canada, and Mexico have proposed an amendment to the Montreal Protocol to phase down the production and consumption of HFCs. The amendment would gradually reduce consumption and production and control byproduct emissions of HFCs in all countries, and require reporting in these areas. The amendment includes a financial assistance component for countries that can already access the Protocol’s Multilateral Fund, and leaves unchanged the reporting and accounting provisions of the UN Framework Convention on Climate Change and Kyoto Protocol on HFC emissions.

Here’s the 2010 article with more on this climate strategy: “A Novel Tactic in Climate Fight Gains Some Traction.”

Climate talk by Dr.John JamesPrev
Labor’s woolly plan for a referendum on local government at the September 14 federal election has hidden fangsNext