World on course to run out of water, warns Ban Ki-moon

World on course to run out of water, warns Ban Ki-moon 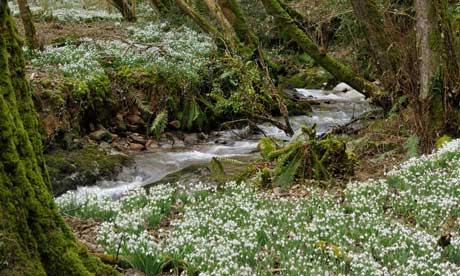 Woodland stream Snowdrop Valley, Exmoor. ‘Although seemingly abundant, only a tiny amount of the water on our planet is easily available as freshwater,’ said Ban Ki-moon. Photograph: Martin Fowler/Alamy

Ban Ki-moon has warned the world is on course to run out of freshwater unless greater efforts are made to improve water security.

Speaking on the UN’s International Day of Biological Diversity, Ban said there was a “mutually reinforcing” relationship between biodiversity and water that should be harnessed.

“We live in an increasingly water insecure world where demand often outstrips supply and where water quality often fails to meet minimum standards. Under current trends, future demands for water will not be met,” Ban said.

Water, food, energy and climate are all linked.

Ban believes there is an opportunity to address these challenges as the Millennium Development Goals are replaced with a new set of objectives.

“As the international community strives to accelerate its efforts to achieve the Millennium Development Goals and define a post-2015 agenda, including a set of goals for sustainable development, water and biodiversity are important streams in the discussion.

“Although seemingly abundant, only a tiny amount of the water on our planet is easily available as freshwater,” he said.

The latest UN World Water Development Report, released last year, called for $13.7bn to $19.2bn of the Green Climate Fund’s annual targeted funding of $100bn to be directed at the challenges faced by the water sector.

Much of this would be used to tackle supply shortfalls and flood management.

Ban said the once competing campaigns for water and biodiversity protection could now be turned to the benefit of societies facing stresses on both water and food security.

“Where once the focus was on trade-offs between water use and biodiversity, today we are coming to understand how biodiversity and water security are mutually reinforcing,” he said.

“Integrating nature-based solutions into urban planning can also help us build better water futures for cities, where water stresses may be especially acute given the rapid pace of urbanization.”