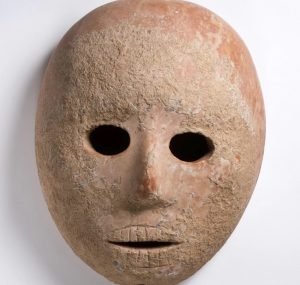 The most recent of the 15 Neolithic masks found in the world came from a farm in the West Bank near the Dead Sea. The mask probably was brought to the surface by agricultural activities that disturbed the soil. The field is full of Neolithic artefacts, indicating that there is an archaeological site underground, The newly discovered mask, and some of the others, have holes drilled around their edges, possibly so that they could be tied around a person’s face or another object. Without much archaeological context for these artifacts, archaeologists don’t know exactly how the masks were used 9,000 years ago.

Only three have the masks come from a known source. One was discovered in a cave, one was from the private collection of Israeli general Moshe Dayan and this one. All were found in a relatively small area near the Dead Sea. The small number of masks and the fact that none of them were scientifically excavated has raised doubts about their authenticity, further encouraging scientists to thoroughly explore the area where this mask was found, It is hoped that such an exploration will reveal details about the transition or humanity from a hunting and gathering community to an agricultural community.