Major investment in irrigation systems needed to feed population expected to grow by 1.5 billion over next 40 years 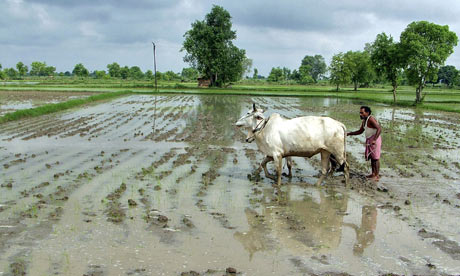 The UN has said that billions of dollars will be needed to improve irrigation in Asia. Photograph: Stringer/India/Reuters

Asia faces an unprecedented food crisis and huge social unrest unless hundreds of billions of dollars are invested in better irrigation systems to grow crops for its burgeoning population, according to a UN report published today.


India, China, Pakistan and other large countries avoided famines in the 1970s and 1980s only because they built giant state-sponsored irrigation systems and introduced better seeds and fertilisers. But the extra 1.5 billion people expected to live on the continent by 2050 will double Asia’s demand for food, says the report from the UN’s Food and Agriculture Organisation (FAO) and the World Bank-funded International Water Management Institute (IWMI).

A combination of very little new land left for cultivation, an increasingly unpredictable climate and water supplies stretched to the limit means the only realistic option to feed people in the future will be better management of existing water supplies, according to the report.

“There is no new land or water to develop so we have to make more use of what we have. Existing irrigation systems are often 50 to 70 years old. They are leaking and water is evaporating. We urgently need a new generation of irrigation. That is the only way we are going to feed everyone,” said Colin Chartres, who is the director general of IWMI.

“If we don’t [invest] we will see food crises like the one in 2007 repeated over and again. That was an early warning. If nothing is done, you are going to get an increase in social unrest, migration and a fertile ground for terrorism,” he said.

Since the demise of communism and the rise of the free market, farmers have increasingly opted to take irrigation into their own hands, mainly using cheap Chinese-made pumps.

Tens of millions of smallholders have invested in their own pumps so that they can extract water from shallow aquifers whenever they choose. Governments have been unable to regulate this practice, which has led to major exploitation of water resources.

Water tables in parts of India and China have dropped catastrophically in the last few years. “It’s a trend that will become more common. The consequence will be more farmer suicides, hardship and collapsing enterprises,” said Chartres.

The food crisis is compounded by millions of wealthier people in developing countries turning away from traditional rice and cereal-based diets to western dairy and meat-based foods that require more water, says the report.

“The agriculture of tomorrow will need a lot more water. Given that one litre of water is used to produce one calorie of food, the world will need up to 6,000 cubic kilometres of additional water every year to feed another 2.5 billion people 2,500 calories per day.

“This is almost twice what we use today and is not sustainable,” said Chartres.

The report urges countries to repair and modernise irrigation systems and use better drip-fed farming. The UN expects the world to have an extra 2.5 billion mouths to feed within 40 years, most of them in developing countries. Africa’s population could double, Asia’s could grow by nearly 30% and Pakistan’s by 85%.