Birth of a Classic 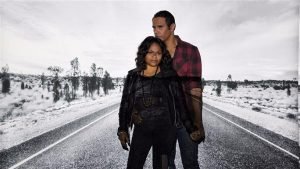 Birth is a messy, painful reminder that life itself is torn from the earth at great cost. Birth is not a generally considered a comfortable spectator sport.

Packaging the darkness that is the wasteland at the heart of this play in a romcom is a stroke of genius that allows us as an audience to enjoy the visceral excitement of new love in a world with plenty of dark corners.

There is nothing messy or painful about the production of Heart is a Wasteland premiered at the Malthouse in Melbourne last night, except the content itself. Despite this, a classic is born. This has a long and rich life ahead of it. This production will run as long as the principals can bear it. It will tour, it will become a standard of Australian repertory theatre and will dominate school curricula to come. Despite, or possibly because of,  its powerful anchoring in the Australian outback it has international appeal well beyond its stark and realistic portrayal of life for the First Nation people of this ancient land.

Ursula Yovich is powerful, sexy and grounded in the way that leaves men with their mouths flapping helplessly, their groins swelling hopefully and their hands searching desperately for something to do. As Rae the travelling troubadour, she delivers five very different songs throughout the play, providing welcome emotional release, evoking and summing up the deep and dark emotions that have been brought to a head by the tight, raw and refined script. The immediate concerns of motherhood, survival and respect are complemented by a commentary on the politics of nuclear testing, environmental destruction and economic disempowerment.

It is a rich but familiar combination and the perfect complement to the stubborn, here and now, man of few words played by her co-star.

Aaron Pedersen’s muscular, brooding performance as Dan has brought forth inevitable Brando comparisons but he embodies a back story far deeper and darker than Stan Powolski’s migrant experience of industrial America. His fine grained depiction of the emotional underpinnings of domestic violence is triggering, illuminating and scarifying all at once. Of course, the slow burning rage of cultural frustration and disempowerment is a universal story and Australia’s First Nation people experience all three in spades.

The production might be a well-oiled machine but the birth of a new love is messy, dangerous and exciting. The close up focus on the two very different characters falling for each other is a traditional way to tell it. It is the trope of romantic comedy from Much Ado about Nothing to Moonlit. Isolating the love affair in a road trip, a remote location and a constrained time period is not new either. The Scottish Midsummer  is a recent example of a two hander play built around the lost weekend. It also combines music and drama in a manner not dissimilar to Heart is a Wasteland.

The standout differentiator for this little black duck, however, is the deft way in which Heart is a Wasteland combines the personal and the political. Rae’s reflections on Maralinga are more didactic than theatrical but they are delivered from the passenger seat in precisely the manner one might expect an Aunt, brother or new girlfriend to deliver them.

Her critique of Dan’s work for the mining companies is the real conversation going on around the barbecues and dinner tables of thousands of homes across the post-Colonial world. Her naming and shaming of the transactional nature of men’s approach to sex caused groans, laughter and a ripple of uncomfortable shifting through the audience.

This is real life, extracted to an essence, synthesised into something very, very powerful and then delivered to us as a full meal with entrée, main and dessert.

If you are in Melbourne this month you have a unique opportunity to witness the birth of a classic, close up and personal. No doubt, you will have plenty of opportunities to see the play again but you can only witness its birth once. I was very, very lucky to be present at its Premiere, but that is another story.