It’s the end of the world as we know it, and I feel fine

The Syrian nightmare is a state is being ravaged and mauled to the point of non-recognition. It is now a mere terrain for heavily armed bullies, a smoky crusted ruin of dust and ruin, its populace fleeing when it can, shielding itself when it must, and hoping for the best

How Solar Power Could Slay the Fossil Fuel Empire by 2030

and all we need to do is help it on its way !

In just 15 years, the world as we know it could be transformed forever. The age of oil, gas, coal and nuclear will be over. A new age of clean power and smarter cars will totally, and permanently disrupt the existing fossil fuel-dependent industrial infrastructure in a way that even the most starry-eyed proponents of ‘green energy’ could never have imagined. By 2030 “the industrial age of energy and transportation will be over,” swept away by “exponentially improving technologies such as solar, electric vehicles, and self-driving cars.” 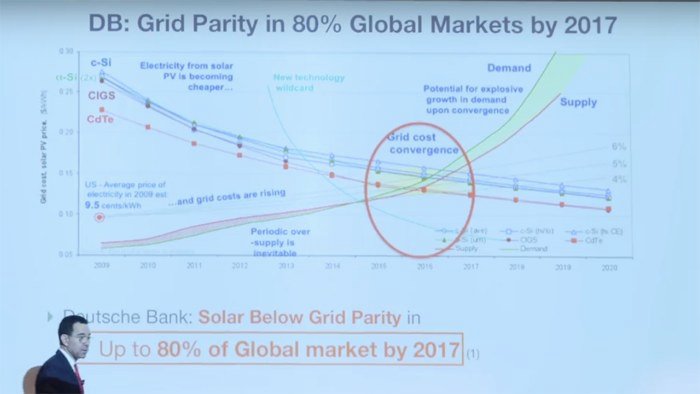 The Finkel Review makes it clear that the building of new coal-fired power stations offers neither cheaper power nor greater security. Despite hailing the “unstoppable” energy revolution in his draft report, Finkel barely touches on the radical transformation that the CSIRO and the network owners said was not just possible, but absolutely essential in the name of grid security, and to manage costs.

Driven by Tesla, battery prices cut in half since 2014

Electric vehicles already match petrol cars on total cost, soon batteries plus solar will beat natural gas power. In 2013, the International Energy Agency estimated EVs would achieve cost parity with gasoline vehicles when battery costs hit $300 per kiloWatt-hour of storage capacity, which the IEA said would happen by 2020. That price point was in fact crossed last year, which is why both GM and Tesla announced they could deliver affordable (well below $40,000), long-range (200-plus miles) EVs.

What is ‘cognitive reserve’? How we can protect our brains from memory loss and dementia

Even cognitively normal people experience pathological changes in their brain, including degeneration and atrophy, as they age. By the time a person reaches the age of 70 to 80, these changes closely resemble those seen in the brains of people with Alzheimer’s. Even so, many people are able to function normally in the presence of significant brain damage and pathology. So why do some experience symptoms of Alzheimer’s and dementia, while others remain sharp of mind?

Explore per-postcode domestic and commercial PV across different installation sizes. Scroll and select from the postcodes on the right to add them to the data set. Select the system size categories to toggle their visibility.

Climate change an accelerant to instability in unexpected ways

A wide-ranging analysis by Code Red.

Read the full report by Ian Dunlop and David Spratt.

New study released as “unusually early” heatwaves grip large swathes of globe. Deadly heatwaves could be faced by nearly three-quarters of humanity by 2100. “We are running out of choices for the future,”

It’s so hot in Phoenix, Arizona, planes can’t take off

American Airlines cancelled 50 flights out of Phoenix on Tuesday because the planes can’t operate above 118°F.

The Truth About Trump’s Golden Boy

Jared Kushner has influence over some of the most significant areas of world politics — tasks normally reserved for people who spent their careers on them. But more important than the experience question, Kushner is a shining example of the web of hypocrisy, contradiction and intrigue surrounding Trump and his promises to rejuvenate American capitalism.

Aleppo After the Fall

The core of the conflict in Aleppo, as in much of Syria, was a divide between urban wealth and rural poverty. It is not new. Travelers in the Ottoman era used to describe the shocking gulf between Aleppo’s opulence and the countryside surrounding it, where peasants lived in almost Stone Age conditions. Later, this divide mapped onto the city itself, as eastern Aleppo spread and filled with poor migrants. Deeply religious and mostly illiterate, smoldering with class resentment, they became the foot soldiers of a violent insurgency led by the Muslim Brotherhood in the 1970s.

Saudi Arabia is destabilizing the world

The Saudi government is an absolute monarchy supported by one of the world’s most reactionary religious sects. It gives clerics large sums to promote their anti-Western, anti-Christian, anti-Semitic brand of religious militancy abroad. In exchange, the clerics refrain from criticizing the Saudi monarchy or its thousands of high-living princes. Saudis with close ties to the ruling family give crucial support to groups like Al Qaeda, the Taliban, and ISIS. This fact should be at the front of our minds whenever we consider our policy toward the Middle East

US Shoots Down Syrian Government Aircraft

The US proxy war in Syria is part of a broader confrontation which is not just aimed at the Assad regime but more broadly against its backers—Iran and Russia. Trump’s trip to the Middle East last month was above all aimed at forging an alliance with Saudi Arabia and its allies in the Gulf States against Iran and its allies in the region. The immediate outcome was the imposition of an all-out, Saudi-led economic blockade against Qatar—itself an act of war. Riyadh accused Qatar of sponsoring terrorism, but the real reason lies in Qatar’s relations with Iran and its reluctance to join Saudi Arabia in its anti-Iranian war drive.

US Warplanes West of Euphrates in Syria Now Legitimate Targets

After the US shot down a Syrian fighter jet on Sunday, tensions escalate.  Any aircraft, including planes and drones of the international coalition, detected in the operation areas west of the Euphrates River by the Russian air forces will be  targets.” Following these developments, commentators have expressed alarm at the possibility that President Donald Trump could escalate matters even further, given his erratic and impulsive behavior in addition to his inexperience and lack of education on matters of foreign policy.

Theresa May and Emmanuel Macron’s plans to make Internet companies liable for ‘extremist’ content on their platforms are fraught with challenges. They entail automated censorship and harming everyone’s right to free expression.

Globalisation was supposed to tear down barriers, but security fears and a widespread refusal to help migrants and refugees have fuelled a new spate of wall-building across the world, even if experts doubt their long-term effectiveness. When the Berlin Wall was torn down a quarter-century ago, there were 16 border fences around the world. Today, there are 65 either completed or under construction

What to say to those who argue that they’ve got nothing to hide so nothing to fear from the intrusive ears of the state? Snowden is engagingly philosophical yet frank about his current position and where we are headed as a society.

Every router in America has been compromised’

ohn McAfee talks about the insecurity of the modern network and the vulnerabilities we all share. If you are connecting your mobile device to public wifi, you can forget about having any privacy.

The US Is Sleepwalking Towards A Nuclear Confrontation with Russia

It is astounding in its stupidity

Blundering Into Yet Another Middle East War

The possibilities for catastrophic miscalculation are skyrocketing. It’s not just the proximity of rival armed forces in both eastern Syria and the Gulf. It’s also the lack of direct communication among key parties and the lack of clarity as to their actual policies. The likelihood of miscalculation is virtually certain.

The Saudi Regime Is Playing Donald Trump With Potentially Disastrous Consequences. It’s no great surprise when Trump walks away from past statements in service to some impulse of the moment. Nowhere, however, has such a shift been more extreme or its potential consequences more dangerous than in his sudden love affair with the Saudi royal family. It could in the end destabilize the Middle East in ways not seen in our lifetimes (which, given the growing chaos in the region, is no small thing to say).

A mapping game for your weekend

I now know at least one person who correctly interpreted last week’s map.

The map is unlabelled and uncaptioned. Can you figure out what data is being presented. Click for hints.

Birth of a ClassicPrev
The John James Newsletter No. <184>Next