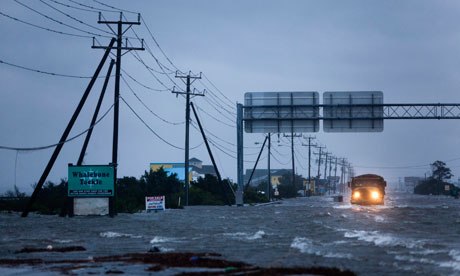 Global warming is leading to such severe storms, droughts and heatwaves that nations should prepare for an unprecedented onslaught of deadly and costly weather disasters, an international panel of scientists has said.

The greatest danger is in highly populated, poorer regions, but no corner of the globe is immune. The document, by the Intergovernmental Panel on Climate Change, forecasts stronger tropical cyclones and more frequent heatwaves, deluges and droughts, and blames man-made climate change, population shifts and poverty.

“There are lots of places that are already marginal,” said Field. But it’s not just poor areas: “There is disaster risk almost everywhere.”

The scientists say that some places, particularly parts of Mumbai in India, could become uninhabitable from floods, storms and rising seas. In 2005, over 24 hours nearly 3 feet of rain fell on the city, killing more than 1,000 people and causing widespread damage. Roughly 2.7 million people live in areas at risk of flooding.

The people of small island nations may also need to abandon their homes because of rising seas and fierce storms. “The decision about whether or not to move is achingly difficult and I think it’s one that the world will have to face with increasing frequency in the future,” Field said.