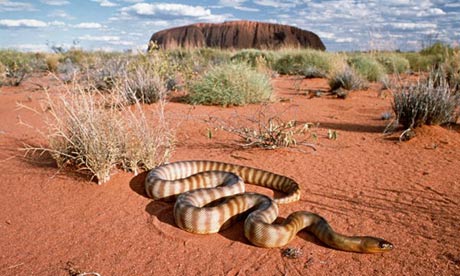 Environmentalists have pushed for greater federal government involvement in national parks due to pro-development decisions made by state governments. Photograph: Corbis

Environmental groups have forecast a huge public backlash to proposed logging, shooting and prospecting within national parks, after the government backed away from adding federal oversight to conservation areas.

The Greens put forward an amendment to a government bill – on protecting water tables from coal seam gas drilling – that would have given the commonwealth greater power to protect national parks.

Under the current the Environment Protection and Biodiversity Conservation Act, the federal government can intervene only if an endangered species, heritage area or place of “national significance” is affected by development.

It is understood a proposal by federal environment minister Tony Burke to include a national parks trigger was rejected at a cabinet meeting on Tuesday night.

A spokesperson for Burke said that the government supports its bill “as it stands” and that separate 2011 proposals, which would have brought most national parks under the commonwealth’s remit, were “still under consideration”.

Environmentalists have pushed for greater federal involvement in national parks due to their dismay at pro-development decisions made by state governments.

Last year, the New South Wales government said it would open up 77 of its national parks and reserves to amateur hunters to shoot feral animals, despite concerns over the safety to people.

The Queensland government is conducting a review of all protected areas put aside since 2002, with a view to allow logging in certain parks, while the Victorian government has introduced 99-year private leases for tourism development in all of its national parks.

Lyndon Schneiders, national campaign director of the Wilderness Society, said that the public was strongly against the erosion of national parks.

“Millions of people use national parks,” he said. “Governments that are driving these changes to realise commercial opportunities don’t really realise they are biting their constituents. Most people out there can’t really believe what is happening is real and that it is being allowed to happen. The backlash is already there and it’s only going to get bigger.

“The individual impacts of each development are bad, but what’s most disturbing is that there is now a section of politics that has decided that national parks aren’t worth it. This is a lost opportunity because the states have shown they can’t be trusted. We’ve encouraged the government to do something on this for three years, but they’ve dragged their heels and now they are barely functioning. This is a skirmish in what will be a much longer debate around nature conservation. We are at a crossroads moment about how we best protect national parks and other areas.”

Matt Ruchel, executive director of the Victorian National Parks Association, said he was “disappointed” by the lack of federal oversight.

“If the states go feral and undermine the integrity of national parks, who else will provide the checks and balances but the federal government?” he asked.

“National parks are the cornerstone of conservation. They are well respected by the Australian community, they are a major draw card every day of the year, they clean air and water and draw carbon from the atmosphere.

“Up until recently, protecting national parks was a bipartisan issue. I don’t understand why there’s been a shift away from that approach. It’s deeply concerning.”