The best scientists in the world are telling us that our activities are changing the climate, and if we do not act forcefully, we’ll continue to see rising oceans, longer, hotter heat waves, dangerous droughts and floods, and massive disruptions that can trigger greater migration, conflict, and hunger. The Pentagon says that climate change poses immediate risks to our national security. We should act like it.
President Obama’s State of the Union address

Trolling Russia
Israel Shamir is a Russian-born Jew and Israeli citizen. This is a tantalising analysis.
http://www.informationclearinghouse.info/article40751.htm

Russia signs military cooperation deal with Iran
Defence minister Hossein Dehqan states that Iran and Russia had a “shared analysis of US global strategy, its interference in regional and international affairs and the need to cooperate in the struggle against the interference of foreign forces in the region.”
http://timesofindia.indiatimes.com/world/europe/Russia-signs-military-cooperation-deal-with-Iran/articleshow/45954724.cms

QE warfare is pushing world financial system out of control
Since the GFC of 2008 the world’s combined public-private debt has increased by 20 per cent, and most governments have been engaged in competitive currency devaluations. The world is dangerously unanchored with true currency wars. The central banks may have bought exactly what they most feared by trying to keep growth buoyant at all costs with so much created debt they may have turned a good deflation into a really bad one.
http://www.telegraph.co.uk/finance/economics/11358316/Central-bank-prophet-fears-QE-warfare-pushing-world-financial-system-out-of-control.html

The coming era of unlimited — and free — clean energy
In Germany, Spain, Portugal, Australia, and the Southwest United States, residential-scale solar production has already reached “grid parity”, so it costs no more in the long term to install solar panels than to buy electricity from utility companies. The prices of solar panels have fallen 75 percent in the past five years and will fall further so within at decade, it will cost a fraction of fossil fuel-based alternatives.
http://www.washingtonpost.com/blogs/innovations/wp/2014/09/19/the-coming-era-of-unlimited-and-free-clean-energy

Is Barack Obama Actually Trying To Help ISIS Take Over Syria?
That headline sounds crazy, right?  It must be untrue, right?  Well, read on, because you might be absolutely shocked by what you learn.  The Obama administration has used al-Qaeda fighters and other radical Islamic groups to topple governments such as Syrian president Bashar al-Assad.
http://endoftheamericandream.com/archives/is-barack-obama-actually-trying-to-help-isis-take-over-syria Coalition For A Democratic Syria 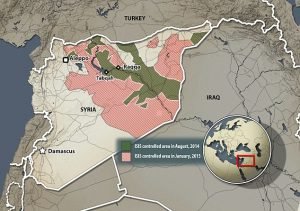 A Small and Shuffling Life
George Monbiot’s passionate evocation of our past – a beautiful read.
http://www.monbiot.com/2015/01/19/a-small-and-shuffling-life/

GM crops to be fast-tracked in UK
http://www.theguardian.com/environment/2015/jan/13/gm-crops-to-be-fast-tracked-in-uk-following-eu-vote?CMP=EMCENVEML1631

Humans Have Brought World’s Oceans to the Brink
We have profoundly decreased the abundance of both large (e.g., whales) and small (e.g., anchovies) marine fauna. Such declines can generate waves of ecological change that can alter entire ocean ecosystem. There are factory farms in the sea and cattle-ranch-style feed lots for tuna; Shrimp farms are eating up mangroves. Stakes for seafloor mining claims are being pursued with gold-rush-like fervor, and 300-ton ocean mining machines and 750-foot fishing boats are now rolling off the assembly line.
http://www.commondreams.org/news/2015/01/16/humans-have-brought-worlds-oceans-brink-major-extinction-event

Nice and dirty – the importance of soil
As much as 95 percent of our food comes from the soil, but 33 percent of global soils are degraded, and we may only have 60 years of nutrient-rich top soil left – it is not a renewable resource. Africa is especially hard hit.
http://worldpress.org/link.cfm?http://www.IRINnews.org/report.aspx?ReportID=101019
and
http://www.thisisafricaonline.com/Perspectives/Why-Africa-s-degraded-soils-will-cost-the-continent-dearly

Formation-flying satellites link up to create giant virtual telescope in orbit
The European Space Agency project depends on a level of precision never before achieved in orbit. By flying small satellites in formation, virtual telescopes of incredible power and sensitivity will help astronomers to observe the sun. One of the satellites will point its instruments towards the Sun while the second will place itself between the first craft and the sun with a disc to occlude it for a long-lasting total solar eclipse.
http://www.theguardian.com/science/2015/jan/17/formation-flying-satellites-space-telescopes-esa-proba-3?CMP=ema_565

Saudis to build world’s first large scale solar powered desalination plant
The plant, to supply Al Khafji City in the north-east of the country, will produce 60,000 cubic metres of water a day. It is due to be commissioned in 2017. Desalination is a costly, energy intensive process that is usually powered by fossil fuel baseload plant
http://reneweconomy.com.au/2015/saudis-build-worlds-first-large-scale-solar-powered-desalination-plant-82903

Drone Strikes Killed at Least 874 People in Hunt for 24 Terrorists
Drone strikes in Pakistan killed as many as 221 people, including 103 children, in the hunt for just four men. Obama’s secret Kill List selects individual targets for assassination and requires no public presentation of evidence or judicial oversight.
http://us.sputniknews.com/us/20150120/1013514542.html

Off the Charts
2014 is the 38th consecutive year with above average global temperatures.
http://www.climatecouncil.org.au/2014-hottest-year-on-record-globally 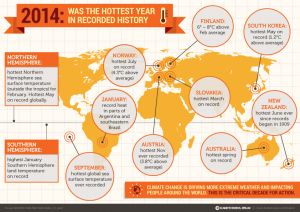 3 Minutes to Midnight
Experts on the board said they felt a sense of urgency this year because of the world’s ongoing addiction to fossil fuels, procrastination with enacting laws to cut greenhouse gas emissions and slow efforts to get rid of nuclear weapons
http://www.commondreams.org/news/2015/01/22/doomsday-clock-ticks-forward-climate-change-nuclear-weapons-push-humanity-closer

How Whales Change Climate
The astonishing story of how whales keep the oceans alive – and alter the composition of the atmosphere.
http://www.monbiot.com/2015/01/10/how-whales-change-climate/

Yemen: understanding Houthi motives is complicated
Yemen is a cornerstone of the US counterterrorism program. The Houthi group claimed responsibility for the Charlie Hebdo killings. For most Yemenis the group is capable of reshaping the complex political landscape of the poorest country in the Arab world. Since September they have occupied some of the country’s most important infrastructure, including the presidential palace and sea ports.
http://www.theguardian.com/world/2015/jan/19/understanding-houthi-motives-complicated-essential-yemen-future
It is considered to be al Qaeda’s deadliest branch with the greatest global reach.
http://www.wsj.com/articles/rebels-battle-soldiers-near-yemens-presidential-palace-1421650439

Saudi Arabia declares all atheists are terrorists
A series of new laws define atheists as terrorists, in order to clamp down on all forms of political dissent.
http://www.independent.co.uk/news/world/middle-east/saudi-arabia-declares-all-atheists-are-terrorists-in-new-law-to-crack-down-on-political-dissidents-9228389.html