Israel has for years worked to remove Assad
with US support it has encouraged Assad’s enemies, including IS
now that IS controls Palmyra, the “pearl” of the desert,
the most intact 2,000 years old monument to ancient Rome,
should its imminent destruction be blamed on Israel, on it’s clandestine control over US policy?
Will Israel still prosper with IS in control of Damascus?
Senior Israelis say they would prefer a victory by Al-Qaeda over a victory by Assad.

The Day After Damascus Falls

and
http://www.aljazeera.com/indepth/opinion/2015/05/palmyra-destroyed-syria-isil-150521113045812.html
and
http://english.alarabiya.net/en/News/2013/03/16/Syria-s-ancient-city-of-Palmyra-on-brink-of-destruction.html
Syrian War Set to Re-Explode
US, Turkey, Saudi Arabia alliance with Al Qaeda has the potential to engulf the region in violence. Deep Saudi pocketbooks combined with Turkish ground forces are a catastrophe in the making.
http://www.informationclearinghouse.info/article41842.htm

Palestine Scores Major Victory With Vatican Recognition of Statehood
With the Israeli-Palestinian peace process all but dead and buried, a growing chorus of countries and international bodies are moving toward recognizing Palestinian sovereignty in an attempt to push the Israeli government to make concessions toward their Palestinian rivals. That effort received a powerful boost when Pope Francis announced that the Vatican has recognised the state of Palestine.

NATO deliberately destroyed Libya’s water infrastructure
UNICEF reported that the disruption to the GMR had left 4 million Libyans without potable water. The GMR remains disrupted to this day, and Libya’s national water crisis continues to escalate. The deliberate destruction of a nation’s water infrastructure, with the knowledge that doing so would result in massive deaths
http://www.theecologist.org/News/news_analysis/2869234/war_crime_nato_deliberately_destroyed_libyas_water_infrastructure.html

Huge Bee Die-Off
US lost 40% of bees last year. Some pesticides, like neonicotinoids, have long been shown to be major causes of bee decline.
http://www.commondreams.org/news/2015/05/14/years-ago-was-unheard-dire-trend-persists-huge-bee-die

Macedonia – the next hot spot after Ukraine?
A few days ago, Russia stated that the the Turkish Stream gas will go through at the end of 2016. If this happens, the US will lose a trump card to put pressure on Russia and Europe, which may encourage the CIA to repeat its Ukraine strategy in Macedonia.
http://fortruss.blogspot.mx/2015/05/macedonia-next-hot-spot-after-ukraine.html

Super heating of the methane traps of Siberia
No Pause — NASA Shows Human Hothouse Maintaining Record High Temperatures for 2015.Overall, temperatures at +0.99 degrees Celsius above 1880s averages for the first four months of 2015 should be cause for concern. We still have El Nino ramping up in the Pacific could well ramp higher later this year. Looking at the global temperature anomaly map provided by NASA, we can see where much of this extra heat accumulated throughout April:
Global Temps NASA April 2015

Bibi: The Hidden Consequences of His Victory
The Israeli electorate has given a mandate for policies that preclude any settlement with the Palestinians. The international boycott [against Israel] will intensify. The demand to fully enfranchise the Palestinians will eventually prove irresistible. What happens after that, no one can say.
http://www.nybooks.com/articles/archives/2015/apr/23/bibi-hidden-consequences-his-victory/

Yet Another Huge Diplomatic Victory for Russia
Unless you read Russian you might not have noticed that something big just happened in Russia: Kerry, Nuland and a large State Department delegation have met with Foreign Minister Lavrov and then with President Putin.  With the latter they spent over 4 hours.  Not only that, but Kerry said he would strongly caution Poroshenko against renewing military operations. To say that this is a stunning development would be an understatement.
http://www.informationclearinghouse.info/article41835.htm
and

Leading doctor says mobile phone radiation a hotline to brain cancer
There is a million times more radiation today than there was 50 years ago,” he said. “The World Health Organisation has upgraded cell phone radiation to B2 category, which means possibly –carcinogenic.
http://www.heraldsun.com.au/news/leading-doctor-says-mobile-phone-radiation-a-hotline-to-brain-cancer/story-fni0fiyv-1227349594139
too much electromagnetic radiation is being emitted from them which could be a reason for rising cancer rates and an increase in autism and obesity.Nearly 200 experts are calling on the UN to provide guidelines as they say the radiation is damaging DNA in our cells.
http://www.euronews.com/2015/05/12/scientists-warn-against-mobile-phone-radiation/
for the text
http://www.emfscientist.org/images/docs/International_EMF_Scientist_Appeal_Description.pdf

Why Australia will lead the world in solar + storage
Tesla has changed the conversation around battery storage. Consumers want it, competitors and retailers are going to have to move quickly to meet that demand, and Australia is being regarded as the market where it could all happen. Australia is going to be the testing ground for the world,
http://reneweconomy.com.au/2015/why-australia-will-lead-the-world-in-solar-storage-78627
Queensland commits to 50% renewable target by 2030
This means that all three Labor states are looking to ambitious renewable energy targets, in contrast with the Federal government which is looking to cut the target for large-scale renewables.
http://reneweconomy.com.au/2015/queensland-commits-to-50-renewable-target-by-2030
States meet on climate, renewables, in effort to lead Australia as feds stall
ACT hoped to lead a state-based climate effort that would more than make up for Australia’s distinct lack of ambition on the federal front.
http://reneweconomy.com.au/2015/states-meet-on-climate-renewables-in-effort-to-lead-australia-as-feds-stall-35220

Climate Denial Takes a Toll on Scientists—and Science
Climate denial campaigns “can absolutely influence what you do and what you write about,” said Trenberth, who was not involved in the study. “Part of the reason they do it is to distract you and get you to waste your time.” Instead of “publishing the good science needed to advance our understanding of climate change,” scientists are left defending their work and debunking false claims
http://insideclimatenews.com/news/11052015/climate-denial-takes-toll-scientists%E2%80%94and-science.

Trident whistleblower: nuclear ‘disaster waiting to happen’
“This is bigger than me, it’s bigger than all of us. We are so close to a nuclear disaster it is shocking, and yet everybody is accepting the risk to the public.” A fascinating bad-time story…..
https://wikileaks.org/trident-safety/
Range of Wikileaks papers: 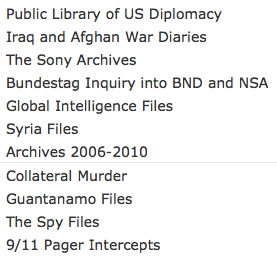 Who is not bombing in the Middle East?
The Saudis are bombing Yemen because they fear the Shia Houthis are working for the Iranians. The Syrian government is bombing its enemies in Syria and the Iraqi government is bombing its enemies in Iraq. America, France, Britain, Denmark, Holland, Australia and Canada are bombing Isis in Syria and in Iraq. The Egyptians are bombing parts of Libya, the Iranians have acknowledged bombing in Iraq and of course the Israelis have  bombed Syrian government forces in Syria but not Isis (an interesting choice, we’d all agree).
http://www.independent.co.uk/voices/comment/robert-fisk-who-is-bombing-whom-in-the-middle-east-10222938.html

A Thoughtful Look at the German-Soviet Clash: Could Hitler Have Won?
What was the real turning point in the war, and why? If Hitler had played his cards a bit differently could he have won the war? German forces came very close to defeating the Soviet Union in 1941. Defeat of Soviet Russia would effectively have resulted in German hegemony over all of Europe – a drastic change in the course of world history.
http://www.ihr.org/jhr/v15/v15n6p38_Bishop.html