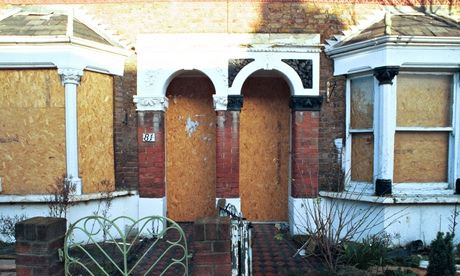 There are more than 700,000 vacant homes in the UK, something housing campaigners say is a shocking waste. Photograph: Martin Godwin

More than 11m homes lie empty across Europe – enough to house all of the continent’s homeless twice over – according to figures collated by the Guardian from across the EU.

There are also a large numbers of vacant homes in Ireland, Greece, Portugal and several other countries, according to information collated by the Guardian.

Many of the homes are in vast holiday resorts built in the feverish housing boom in the run up to the 2007-08 financial crisis – and have never been occupied.

On top of the 11m empty homes – many of which were bought as investments by people who never intended to live in them – hundreds of thousands of half-built homes have been bulldozed in an attempt to shore up the prices of existing properties.

Housing campaigners said the “incredible number” of homes lying empty while millions of poor people were crying out for shelter was a “shocking waste”.

“It’s incredible. It’s a massive number,” said David Ireland, chief executive of the Empty Homes charity, which campaigns for vacant homes to be made available for those who need housing. “It will be shocking to ordinary people.

“Homes are built for people to live in, if they’re not being lived in then something has gone seriously wrong with the housing market.”

He said Europe’s 11m empty homes might not be in the right places “but there is enough [vacant housing] to meet the problem of homelessness“. There are 4.1 million homeless across Europe, according to the European Union. 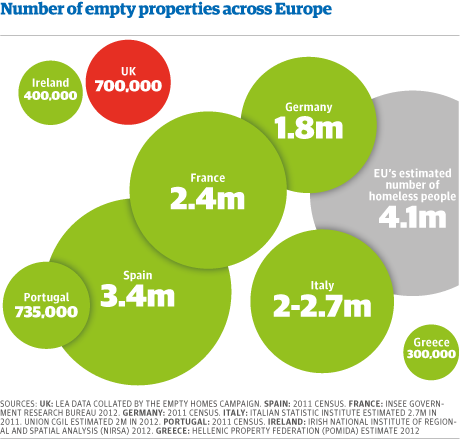 Freek Spinnewijn, director of FEANTSA, an umbrella organisation of homelessness bodies across Europe, said it was a scandal that so many homes have been allowed to lie empty. “You would only need half of them to end homelessness,” he said.

Last month MEPs passed a resolution demanding the European Commission “develop an EU homelessness strategy without any further delay”, which was passed 349 votes to 45.

Gavin Smart, director of policy at the UK Chartered Institute of Housing, said many of the empty homes were likely to have fallen into disrepair or be in deprived regions lacking jobs, but others could be easily brought back to the market.

He said a growing problem was rich investors “buying to leave” and hoping to profit from rising property prices. The prices of prime London property – defined as homes that cost more than £1,000 per sq ft – are now 27% above their 2007 peak, according to estate agent Savills.

Last month a Guardian investigation revealed that a third of the mansions on the most expensive stretch of London’s “Billionaires Row” are empty, including some that have fallen into ruin after standing vacant for a quarter of a century.

Link to video: Inside the derelict mansions of London’s ‘Billionaires Row’Smart said there was growing evidence of the practice in “rich parts of London, other areas of the country … probably all over Europe”.

Most of Europe’s empty homes are in Spain, which saw the biggest construction boom in the mid-2000s fed largely by Britons and Germans buying homes in the sun. The latest Spanish census, published last year, indicated that more than 3.4m homes – 14% of all properties – were vacant. The number of empty homes has risen by more than 10% in the past decade.

The Spanish government estimates that an additional 500,000 part-built homes have been abandoned by construction companies across the country. During the housing boom, which saw prices rise by 44% between 2004-08, Spanish builders knocked up new homes at a rate of more than 800,000 a year.

In some resorts more than a third of homes are still empty five years after the peak of the financial crisis.

The Spanish census suggests that more than 7,000 of the 20,000 homes in Torre-Pacheco, a holiday region between Murcia and the coast are empty.

The area has undergone a massive holiday home construction boom with several new golf holiday resorts, including a 2,648-apartment complex called Polaris World, which opened as the crisis struck. 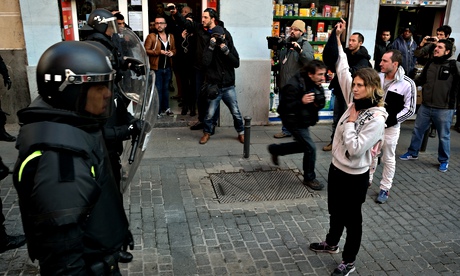 Anti-eviction protesters in Madrid confront police as they try to stop the eviction of a disabled neighbour. Photograph: Juan Carlos Lucas/Demotix/CorbisOwners of apartments in the Polaris World resort, which has a golf course designed by Jack Nicklaus, are struggling to sell homes for half the €200,000 (£163,000) they paid before the crisis.

More than 18% of homes in Galicia, on the north-west Spanish coast, and La Rioja, near Pamplona, are vacant.

Many of the empty Spanish properties were repossessed by banks after owners defaulted on mortgages.

María José Aldanas of Spanish housing and homelessness association Provivienda said: “Spain is suffering from high numbers of repossessions and evictions, so we have reached a point where we have too many people without a home and many homes without people.”

Some city councils in Catalonia have threatened banks with fines of up to €100,000 if homes they repossess remain empty for more than two years. The city council of Terrassa, to the north of Barcelona, has reportedly written to banks holding more than 5,000 homes demanding they take “all possible actions to find tenants” or hand the homes over to the council to use for social housing.

In France, the latest official figures from INSEE, the government research bureau, show that 2.4m homes were empty in 2012, up from 2m in 2009.

Italy will release figures for the number of empty properties in the country’s census, published this summer. A survey by the Italian statistics institute estimated there were 2.7m in 2011, and a 2012 report by the Cgil union estimated 2m. 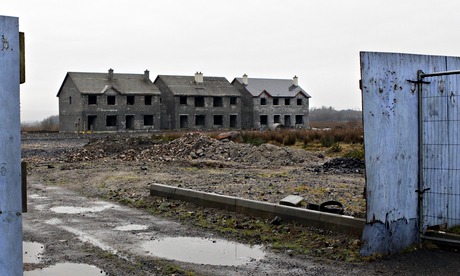 The Waterways, an empty and unsold housing development, is pictured in the village of Keshcarrigan, County Leitrim, Ireland. Photograph: Cathal McNaughton/ReutersIn the UK more than 700,000 homes are empty, according to local authority data collated by the Empty Homes campaign. Campbell Robb, chief executive of Shelter, the UK’s biggest homelessness charity, said “homes shouldn’t stand empty” and the government needed to come up with “bigger, bolder ideas” to tackle the lack of available, affordable homes.

The Irish government has begun demolishing 40 housing estates built during the boom but still empty. It is working out how to deal with a further 1,300 unfinished developments, and Deutsche Bank has warned that it will take 43 years to fill the oversupply of empty homes in Ireland at the current low population growth rate.

One thought on “Scandal of Europe’s 11m empty homes”