Tullow needs cash to fund development of pipelines and infrastructure 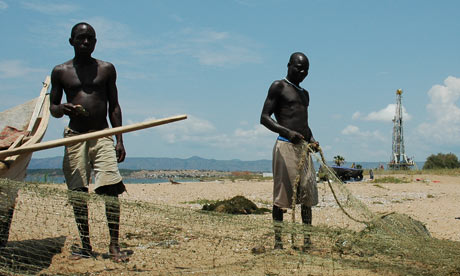 Fishermen near an oil rig on the edge of Lake Albert in western Uganda, where 700m barrels of oil have been discovered Photograph: Xan Rice

The world’s biggest oil companies – including BP and Shell as well as state-owned operations from China – are trying to muscle their way into the world’s largest new oil region: Uganda.

Tullow Oil, the relatively small British-based firm at the centre of the huge energy strikes in Lake Albert, says it plans to hand over part of the oil riches in return for financial help to build pipelines and other vital infrastructure.

Excitement over the Ngara wells increased when Tullow reported it had encountered further shows of oil and was more convinced than ever about the enormous prospects in the region.


But the company also announced an 83% slump in first-half profits to £21.4m and a 16% drop in its existing production from the North Sea and elsewhere, while needing billions of pounds to bring oil out of the ground and refine it in Uganda.

“It is not every day you find a new oil province similar in size to the central Graben region of the North Sea. Practically all the oil majors and some national oil corporations have been on our doorstep seeking to pre-empt a competitive [sales] process”, said Angus McCoss, Tullow’s exploration director.

Tullow plans to sell part of its 100% stake in Block 2, one of three blocks which cover the Ugandan side of Lake Albert, in the next 12 months, it said, but only through a public offer and not via a bi- lateral deal with one other company.

Among the possible partners is Eni of Italy which has already been tipped as a potential buyer of the whole Tullow company although the British firm said it was clearly not for sale.

Tullow shares fell 4% to 1052p on profit-taking following a period where euphoria around the Uganda exploration success has driven the value of the stock up by nearly a third in value since early July.

McCoss said 700m barrels of recoverable reserves had already been proved up but the latest oil shows put the company on the way to proving that there was a further 1.5bn waiting to be exploited.

Tullow said Eni, which has a 43% stake in pipeline builder Saipem, would be a suitable partner as would Chinese companies and others but insisted there was currently no favoured partner in mind.

Tullow said its Ngassa-2 well in Block 2 found signs of oil at two intervals in the reservoir being tested.

“The pressures in these intervals are higher than normal, which may indicate that they are associated with significant oil columns,” it added.

Investment bank Citigroup said in a research note that the results of the latest well would pave the way for a part sale of the block as it makes clear how much it is worth.

The Ugandan government has made clear to Tullow that it would like the company to refine the oil in the area so that the relatively impoverished country could gain as much added value from the energy as possible.

The African country is also acutely aware that many developing countries have found oil riches can be curse as well as cure with charities warning it can bring corruption and wealth only for the political elite. Nigeria is often held up as an example of this.