So shale gas could meet demand for 40 years. What then?

So shale gas could meet demand for 40 years. What then?

Britain’s new gas capacity is much hyped, but the fracking path will most likely lead to the lights going out regardless 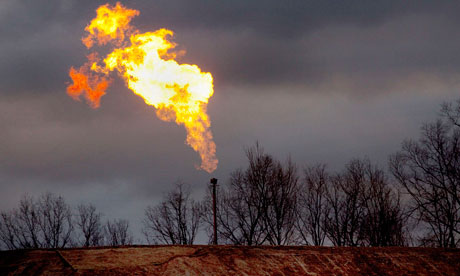 For a moment, let’s take the shale gas evangelists at their word. Britain has stumbled on a pile of carbon cash in its cellar, the energy equivalent of finding a stack of ugly but valuable china in the attic. With North Sea oil and gas in decline and global markets volatile and pricey, suddenly there seems a sure way to deliver the government’s promise of building 40 new gas power stations. By odd coincidence, newly estimated gas resources in the Bowland shale could meet our demand for gas for 40 years.

Wonderful for some, but then what? Fast forward to July 2053 and where will we be? We will have a household and national energy infrastructure hopelessly dependent on an exhausted fuel source, and a climate pushed past the point of no return, warming catastrophically due to the burning of fossil fuels. The government’s own committee on climate change has pointed out that this would likely put the UK the wrong side of legally binding commitments to reduce emissions.

Communities that took the £100,000 bribe to accept a gas-fracking well and the parsimonious 1% of revenue will end up feeling like every other community around the world touched by the resource curse: wondering what happened to them. They will be left with the environmental legacy of extraction, locked in to ever costlier fossil fuels, precious little in pocket and with children growing up in a world marked by climatic upheaval.

Worse still, if we believe the Ofgem warning about an energy supply crunch due in 18 months, none of this much-hyped new gas capacity will be ready in time to help regardless.

And there are many other reasons for caution. Policymakers have been hypnotised by the impact on gas prices of shale developments in the US, but this stands to be a misleading and short-lived result of an immature market. There, a gas dash has flooded the market with new supply, pushing prices down. But unlike conventional gas, shale gas fields decline more rapidly, and there’s evidence that in the US companies have concentrated on “sweet spots”, whereas the broader fields used to justify upbeat estimates are much less productive.

When this was realised, one of the largest American fields, the Marcellus shale in the eastern US, saw an 80% downward revision of its undiscovered, technically recoverable reserves. Similar bad news comes from other hyped new sources such as those in Poland. Industry analysts Bernstein Research concluded that “data from Poland’s shale gas wells validate our concerns about European shale gas: poor flow rates in over-pressured, hard-to-develop shales”.

If climate change and the economic vulnerability of fossil fuel dependence are insufficient reasons to think twice about deepening our fossil fuel addiction, perhaps we should also remember that, wherever the oil industry treads, conflict and corruption tend to follow. From the Middle East to Africa a story of red blood, black carbon and cold money repeats itself.

But it doesn’t stop there. Louisiana, dubbed America’s “petro-state”, hasn’t escaped the resource curse of oil and gas. The Washington Post pointed out not long ago that, instead of prosperity, the industry had brought “dependency, corruption and an indifference to environmental damage”. And, far from improving the lives of its people, that state has some of the worst health and social indicators, such as violent crime, in the country. For all the counties sitting on top of shale beds, this may be further cause to pause before taking the shale pound.

The alternative for Britain has been clear, yet ignored, since the need to stimulate the economy after the financial crash of 2007-2008. It involves: large-scale investment in a green new deal; a carbon army of green-collar workers to make the nation’s draft buildings energy efficient; the building and maintenance of an efficient, more decentralised and renewably powered energy system; the remaking of our transport system – and more.

Obvious efficiency measures such as overnight electric light curfews in city office blocks might help, sending an important signal, and the government could impose a demand reduction obligation on the utilities too. This is not the embarrassing failure of the current small insulation programme dubbed a green deal, but a bold plan for necessary and rapid transition to a modern, more secure and convivial economy. It stands a far better chance of keeping the lights on too.