The things that will destroy America are prosperity-at-any-price, peace-at-any-price, safety-first instead of duty-first and the get-rich-quick theory of life

Sudden release of ocean Methane is not included in IPCC analysis

Sediments underneath the Arctic Ocean hold vast amounts of methane. Just one part of the Arctic, the East Siberian Arctic Shelf (ESAS, rectangle on map below), holds up to 1700 Gt of methane. Scientists  consider a sudden release of just 3% is highly possible and ready to burp at any time, adding over 50 Gt of methane to the atmosphere in one burst. This is ten times the amount of methane already in the atmosphere. Methane is 21 times more effective greenhouse gas than C02. Imagine the amount of warming that would follow such an event.

A 50 Gt release from the ESAS alone could cost the world $60 trillion. By comparison, the size of the world economy in 2012 was about $70 trillion. 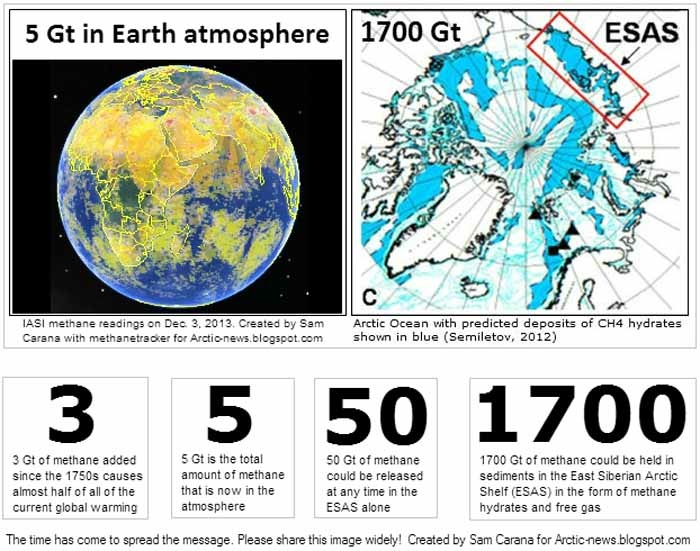 I refer you again to my analysis of the ESAS area and that ice cores show that nearly every surge in temperature over the past billion years has come from massive bursts of methane triggered by abnormal increases in C02.

Nothing else is more important for our future than dealing with methane. All other actions, political, military or religious, including COP21 and Syria and the Pope, are less relevant than this.

the Jakobshavn glacier in Greenland, confirms that the river of ice is now moving at the rate of 46 metres a day, 17 kilometres a year, which is twice the speed recorded in 2003, which in turn was twice as fast as measured in 1997.

Greenland – Imagine the collapse of three Manhatans piled on each other!

This movie is well worth watching.

Five men were directly responsible for what happened at Pearl Harbor. I am one of those five men … We knew well in advance that the Japanese were going to attack. At least nine months before I was assigned to prepare for it. I was operating under the direct orders of the President and was ordered not to give vital intelligence information relating to the whereabouts of the Japanese fleet to our commanders in the field. We had broken the Japanese code … We’d been monitoring all their communications for months prior to the attack

War Is On The Horizon: Is It Too Late To Stop It?

Washington was caught off guard by Russia’s decisiveness. Fearful that the quick success of such decisive action by Russia would discourage Washington’s NATO vassals from continuing to support Washington’s war against Assad and Washington’s use of its puppet government in Kiev to pressure Russia, Washington arranged for Turkey to shoot down a Russian fighter-bomber despite the agreement between Russia and NATO that there would be no air-to-air encounters in Russia’s area of air operation in Syria.

The Russians do not want war, but the problem here is that every Russian effort to avoid war is interpreted by the west as a sign of weakness. By acting responsibly the Russians are now providing an incentive for the West to act  irresponsibly. This is a very, very, dangerous dynamic.

NATO’s Absurd Denials Amid Acts of War in Syria

In two weeks we have seen two apparent acts of war by the US-led NATO military alliance in Syria. First, the Turkish shoot-down of a Russian warplane inside Syrian airspace; now this week the Syrian army is hit in a deadly airstrike. Despite absurd denials, the grim conclusion is that NATO is at war in Syria.

Poorest half of world’s people contribute to just 10%

more that 100 institutions controlling over $1 trillion in funds world-wide had made divestments from fossil fuels in the 10 weeks leading up to Paris. A total of 500 organisations representing over $3.4 trillion in assets have made some form of divestment commitment since the campaign started

A coalition representing more than 100 countries, formed in secrecy six months ago, has emerged at key UN talks in Paris to push for a legally binding deal. The “high ambition coalition” speaks for the majority of the 195 countries at the  conference and consists of 79 African, Caribbean and Pacific countries, the US and all of EU member states. But notable exceptions include major developing countries such as China and India – and Australia. The group wants an agreement at Paris to be legally binding; to set a clear long–term goal on global warming that is in line with scientific advice; to introduce a mechanism for reviewing countries’ emissions commitments every five years; and create a unified system for tracking countries’ progress on meeting their carbon goals.

The Coalition for High Ambition – that numbers around 100 countries, includes the US, as well as European, African and Pacific nations. But not Australia. The coalition – regarded by many as one of the most significant alliances to emerge in 21 years of talks – has been in the making for more than six months.

The World-Changing Choice Between Sanders and Clinton On The Climate

We’re close to an international climate agreement that most agree will be both a major step forward and insufficient to avert a catastrophe.

Boko Haram Is Wounded and Dangerous

The increase in pressure on Boko Haram helps to explain why it has shifted tactics. Unable to square off against the Nigerian military directly, the group has resorted to deploying child suicide bombers and IEDs against softer targets,http://foreignpolicy.com/2015/12/08/boko-haram-wounded-and-dangerous-terrorism-nigeria/

Innovation package just gets us back to square one

The headline $1 billion figure of Malcolm Turnbull’s Innovation and Science Agenda is to be warmly welcomed. But we need to get real about how far we’ve fallen behind the rest of the world in this area, and how fast other countries are accelerating their investments. $1 billion is what Samsung spends on R&D every three weeks.

Stonehenge may have been first erected in Wales

Antibiotic use in food fuels humans’ resistance to vital drugs

in many countries, most of the consumption of antibiotics is in animals rather than humans. This creates a big resistance risk for everyone, which was highlighted by the recent Chinese finding of resistance to colistin, an important last-resort antibiotic that has been used extensively in animals.

Gold and jewels on board Spanish ship the San José that sank 300 years ago off Colombia. The wreck of a Spanish galleon laden with treasure has been found 300 years after it was sunk by the British,