Civilisation is a heat engine. The only way to stop the death of our species is to terminate civilisation; its goods, its cars, its manufacture, its use of resources, its wars – all – as each transaction produces heat.

History continues to write the final chapter in the story of a species which destroys life on its own planet.

Rising rise in rising CO2 – have we crossed the Rubicon?

1-3 mile wide cracks appear in the sea ice north of Greenland in this NASA satellite shot on June 19 of 2016. For reference, bottom edge of frame is 400 miles.

The hottest May in modern history: Earth breaks heat record for 13th month in a row

Record May heat, from Alaska to India and especially in the oceans, put the global average temperature at 15.65 degrees Centigrade, according to NOAA.

“We’re here at the beginning of June and we’re seeing very active fires very similar to behavior that we would typically see in the fall,”

The abnormally hot weather has seen temperatures some 8C above average across a vast swathe of Siberia. On 12 June new records were set with a Saudi Arabian-like heat wave with the highest temperature of 35C.

The so-called Palaeocene–Eocene Thermal Maximum (PETM) saw temperatures rise by 5C over a few thousand years. At the start of the PETM, no more than 1bn tonnes of carbon was being released into the atmosphere each year. In stark contrast, we release 10bn tonnes of carbon every year. “The consequences are likely to be much more severe. If you kick a system very fast, it usually responds differently than if you nudge it slowly but steadily.” The source of the PETM carbon emissions was probably the mass release of methane which had been frozen as hydrates on the ocean floor, probably triggered by a smaller initial release of carbon.

Methane measurements around Greenland and the Laptev Sea

Annual measurements. Especially intense along the north Siberian coast. First image 2009-2013. Second image map of one of the methane sources along the Laptev Sea. In the third image spikes of methane jump into levels not registered in human history.

Dr. Leonid Yurgonov uses the AIRS/AQUA satellite sensor to provide a record of Arctic methane overburden from 2009-2013. The general trend  is quite clear. 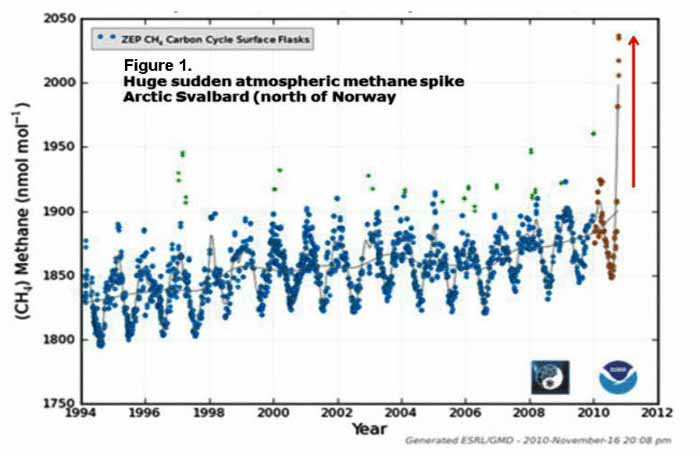 O Captain! my Captain! our fearful trip is done,

The ship has weather’d every rack, the prize we sought is won,

The port is near, the bells I hear, the people all exulting,

While follow eyes the steady keel, the vessel grim and daring;

O the bleeding drops of red,

Where on the deck my Captain lies,

O Captain! my Captain! rise up and hear the bells;

For you they call, the swaying mass, their eager faces turning;

This arm beneath your head!

It is some dream that on the deck,

My Captain does not answer, his lips are pale and still,

My father does not feel my arm, he has no pulse nor will,

The ship is anchor’d safe and sound, its voyage closed and done,

From fearful trip the victor ship comes in with object won;

But I with mournful tread,

Walk the deck my Captain lies,