If liberty means anything at all, it means the right to tell people what they don’t want to hear

No one has a right to sit down and feel hopeless. There is too much to do

In First 5 Months of 2016 Hothouse Gas Concentration Rocketed 3.7 Parts Per Million Above 2015

“With the Northern Hemisphere Pole warming at a rate 2-3 times faster than the rest of the globe, there’s a risk that we start to set off a kind of runaway warming feedback. We may be near that threshold now… God help us if we’ve crossed it…” 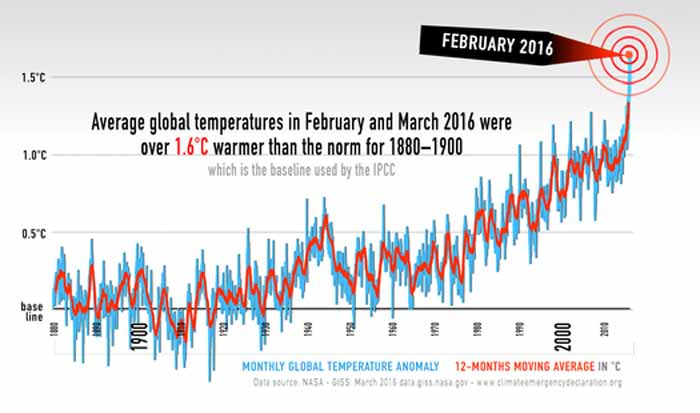 Deadly, record-breaking heat and wildfires sweeping across US are a clear sign of manmade climate change

The high temperatures have hampered firefighters’ efforts to put out blazes that started before the heat set in. In New Mexico, the North Fire has grown to cover over 36,000 acres,

Some of the highest hea values ever recorded on earth. The delay of India’s monsoon is a pretty big deal. It reduce the amount of moisture necessary for the provision of life-giving crops for this country of 1.2 billion, and it increases life threatening heatwaves.

The rise in temperatures and record-setting should scare the hell out of everyone. Unlikely we are going to get through this century. Such is Paradise Lost.

Australian Parliament must declare a climate emergency. the alarming spike in global temperatures as in the bleaching of the Reef. Insist our leaders stop playing political games and stand together to draw a line in the sand.

Click here to Add your voice to the Climate emergency petition

it remains unclear whether Beijing has a coherent vision for Central Asia. Instead, Beijing continues to grow into a role of regional prominence without a clear plan to manage the ramifications of its growing role.

Jordan is Washington’s best Arab ally and is a key partner in the campaign against ISIS in Syria, providing the U.S. and other western states with airbases and other critical operational support,”. a recent spate of terrorist attacks in northern Jordan has recast the threat of extremism into the spotlight of Jordanian policies.

The apparent madness in the Obama administration starting a new Cold War with Russia and China makes sense if viewed from the perspective of the Military-Industrial Complex, which must justify ever-larger budgets,

Region’s intense heatwave combined with Palestinian Water Authority’s refusal to approve additional infrastructure had led to ‘old and limited pipes being unable to transfer all the water needed.’

Palestine’s ‘Prayer For Rain’: How Israel Uses Water As A Weapon Of War http://www.countercurrents.org/2016/06/23/palestines-prayer-for-rain-how-israel-uses-water-as-a-weapon-of-war/

For two people who have never held elected office, billionaire brothers Charles and David Koch, are the most influential people in American politics. Their vast network of political influence groups has been called ‘the Kochtopus’. Few know their names as they go to great lengths to keep their work secret. Jane Mayer has written a highly celebrated work of investigative journalism, it’s a story which takes in the Koch family and a group of their staggeringly wealthy friends. It’s a story that the Kochs didn’t want told, they hired investigators to dig up dirt on Mayer. But she persisted, and her dogged investigation has unravelled more of their shadowy world than has ever been known before.

The Rise of the Corporatocracy

Dr. Paul Roberts former Assistant Secretary of the US Treasury and editor of the Wall Street Journal, said “politically powerful corporations have gained the power in Western “democracies” to sacrifice the welfare of all to corporate greed regardless of the cost. The TTIP treaties gives corporations unaccountable power over governments and peoples.

Before the revolution, Libya was a secure, prospering, secular Islamic country and a critical ally providing intelligence on terrorist activity post–September 11, 2001. Qaddafi was no longer a threat to the US. Yet as Secretary of State Hillary Clinton succeeded in convincing the administration to support the Libyan rebels.

The US Is Sleepwalking Towards A Nuclear Confrontation

Interview with Dmitry Orlov on the potential likelihood for actual direct conflict between the world powers.

Putin: People Do Not Understand How Potentially Dangerous The Situation Really Is

“The world is being pulled into a completely new dimension, while [Washington] pretends that nothing’s happening,” Putin said, adding that he has been trying to reach out to his counterparts, but in vain. The “great danger” is that the launchers that are used for defense missiles can be used to fire Tomahawks in a matter of hours. “How do we know what’s inside those launchers? All one needs to do is reprogram [the system], which is an absolutely inconspicuous task, and the governments of the nations on whose territories these NATO complexes are based would have no way of knowing if this had happened.”

There is a fierce debate going on in the alliance, with the United States literally struggling to coerce European states to strengthen military presence in the east to create hysteria against Russia

recent Nato military exercises in Poland and the Baltics, describing them as “sabre-rattling”.

Apple’s energy bombshell: Why it may sell you electricity

Apple, like so many other major US and European companies, has signed up to become 100 per cent renewable. That is what the millennial generation expects of them.

There Have Never Been This Many Displaced People on Earth

An unprecedented 65.3 million people have been displaced around the world due to war and persecution Half of refugees worldwide are children, a “climate of xenophobia” was spreading due to political rhetoric painting refugees as terrorists or beggars. “Refugees… don’t bring danger” but “flee from dangerous places,”

Refugees: From Syria to Somalia, tales of displacement

Almost 1% of the world population is refugees. On average, 24 people had been displaced every minute of every day last yearup from six every minute in 2005. Global displacement has roughly doubled since 1997, and risen by 50% since 2011 when the Syria war began.

the group had so far gathered 100 sign ups in the first week of launching. “It’s now open for everyone to get involved,”