Westpac has caved to public pressure and have ruled out funding Adani’s coal mine. Tell everyone

Hope has two beautiful daughters: their names are anger and courage. Anger that things are the way they are. Courage to make them the way they ought to be

When you allow the government to call the shots, it rapidly becomes a bully.

Notice that eastern Australia has gained almost as much heat as anywhere else, some 3C. The attention has been on Siberia and Alaska, but we are getting it too. Hence the unusual weather along the east coast. Expect more of this in the years to come. 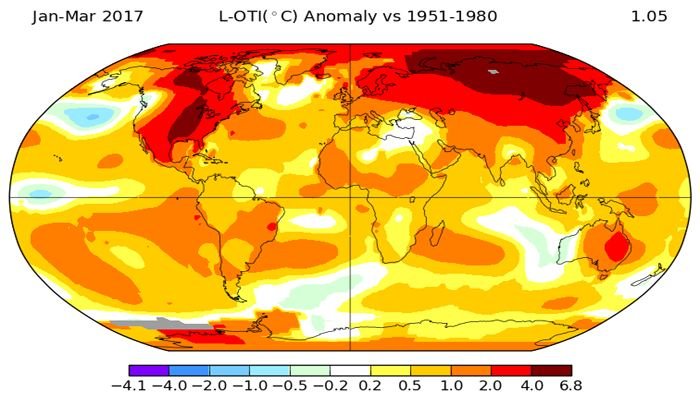 Trump is not fit to lead the US. The group of psychiatrists has claimed the President was “paranoid and delusional” and said it was their “ethical responsibility” to warn the American public about the dangers his psychological state poses to the country. “I’ve worked with murderers and rapists. I can recognise dangerousness from a mile away. You don’t have to be an expert on dangerousness or spend fifty years studying it like I have in order to know how dangerous this man is.” Dr Gartner has called for Trump to be removed from office as he is “psychologically incapable of competently discharging the duties of President”. Duty to Warn, which consists of psychiatrists, psychologists and social workers, signed an open letter warning that his mental state “makes him incapable of serving safely as president” with his tendency to “distort reality” to fit his “personal myth of greatness” and attack those who challenge him. This tendency was likely to increase in a position of power.

The early onset of heat comes after years of expanding drought, warming temperatures, melting glaciers and drying rivers, bringing with it a deepening hardship. Farmers across the country report a sense of deepening desperation as cries for help in the form of nationwide protests break out. Meanwhile, those working outdoors increasingly suffer from heat- and dehydration-related kidney failure. This year, conditions that threaten heat injury and loss of life have spurred schools across the country to close early.

South Sudan’s vulnerable financial state is making the civil-war-torn state easy prey for opportunistic oil and gas companies that could be offering Juba a fraction of the energy profits they would earn under stable circumstances.

Why Washington is Terrified of Russia, China

Russia and China already have established systems to do global trade bypassing the US dollar. So we’re already on our way, slowly but surely, towards a BRICS “gold marketplace.” A “new financial architecture” is being built. That will imply the eventual inability of the US Fed to export inflation to other nations.

Russia’s FEDOR robot can shoot, leading critics of artificial intelligence to express concerns over the potential danger it poses. The government was quick to point out that the exercise isn’t meant to create a “Terminator.” (???)

Uninsured Americans Are Just one Traumatic Injury Away From Financial Ruin:

Pentagon and intelligence community holds the Trump administration, Congress and the courts hostage. Diplomacy is inconsequential, for show only. Tillerson has no say over geopolitical policymaking. A nuclear war could start without Trump, civilian cabinet members, and congressional leaders’ knowledge and involvement until they’re told. With Pentagon commanders and intelligence community bosses in charge of war making and other key geopolitical issues, a potential nightmarish scenario could unfold.

Are we truly ready for the consequences of a war with China?

Earlier this year US Secretary of State Rex Tillerson said he wanted to “send China a clear signal that, first, the island-building stops, and second, your access to those islands also is not going to be allowed.”

The Coming War with China

America has surrounded China and Russia with 400 military bases. Can we wonder they are concerned?

One thousand five hundred Palestinian prisoners have been on a hunger strike for almost a week now. They are refusing sustenance in an effort to improve the deplorable conditions faced by the nearly 6,500 Palestinians who are currently imprisoned in Israel.

These levels correspond with the Miocene Climate Epoch when seas were 120 to 190 feet higher and global temperatures ranged from 3 to 5C. At this rate we should expect 450ppm over the next decade.

ShadowBrokers has released another cache of what appears to be extremely potent (and previously unknown) software capable of breaking into systems running Windows. “This is as big as it gets. Nation-state attack tools are now in the hands of anyone who cares to download them…it’s literally a cyberweapon for hacking into computers…people will be using these attacks for years to come.”

For the first time since the industrial revolution, the country fulfilled all of its energy needs without using coal for a full day.

This Is What’s Really Behind North Korea’s Nuclear Provocations

It’s easy to dismiss Kim Jong-un as a madman. But there’s a long history of US aggression against the North, which we forget at our peril.

The US Role In Creating The North Korean Fortress-State

It was the terrible devastation of this bombing campaign, worse than anything seen during World War II short of Hiroshima and Nagasaki, that to this day dominates North Korea’s relations with the US and drives its determination never to submit to any American diktat. General Curtis Lemay directed this onslaught. It was he who had firebombed Tokyo in March 1945 saying it was “about time we stopped swatting at flies and go after the manure pile.” It was he who later said that the US “ought to bomb North Vietnam back into the stone age.”

Trump’s “America First” budget puts working-class communities last, calling for the elimination of several federally supported, independent, cultural institutions, including the Institute of Museum and Library Services that helps fund literacy and technology programs in 123,000 libraries and about 35,000 museums across the US — all with a budget of just $230 million, which is about .05% of the entire federal budget.

The American Police State Is Coming

Governor Declares State of Emergency to Save Louisiana Coast

More than half of Louisiana’s 4.65 million residents live on the coast. “Parts of our state remain unprotected from or vulnerable to future hurricane and flood events,” Edwards emphasized, and estimated that 2,250 square miles of coastal Louisiana will be lost in the next 50 years unless immediate action is taken. 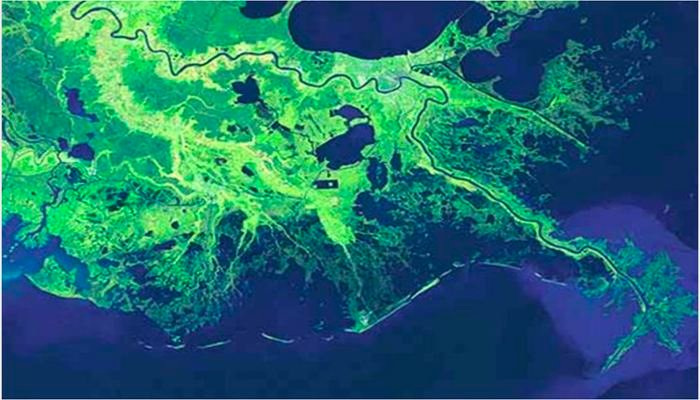