As of 2015, Gulf Stream flow has decreased by 40% because of a massive pool of buoyant fresh water in the North Atlantic from Greenland where ice loss has increased 500% since the turn of the century

To destroy our planet with malice aforethought, with only the most immediate profits on the brain, with only your own comfort and wellbeing (and those of your shareholders) in mind: Isn’t that the ultimate crime?

The overwhelming majority of the world’s scientists agree that any increase in average world temperatures that exceeds 2C above the pre-industrial era will alter the global climate system so drastically that societies will disintegrate in the fashion of South Sudan today, producing staggering chaos and misery

Abrupt Climate Change Is Happening Faster Than Before

In about the last 100,000 years, there have been 23 abrupt temperature changes in Greenland ice cores. In those moments, the temperature abruptly jumped or fell 9 to 14 degrees Fahrenheit across the planet and 25 to 35 degrees Fahrenheit in Greenland. The changes typically took decades to generations, but at their most extreme, they only took two to three years. Published consensus statements on climate change do not factor in abrupt change — an omission that seriously affects how climate policy is made. As recently as the 1990s, it took the mountain pine bark beetle two years to raise a family. But today, summer is two-thirds longer than it was; spring and fall come a month sooner and later. It is so warm that the beetle can go through two life cycles a year, radically increasing the number on the attack. These little beetles are about the size of a grain of rice; up to 10,000 beetles can attack a single tree. Since the turn of the century, the beetles have multiplied so quickly that they’ve killed 60 to 90% of 89 million acres of forest. This is 20% of western North American forests. That’s fast!

The Permafrost is Thawing 20% Faster Than Previously Thought

Vast thawed lands are starting to release carbon dioxide and methane. Thermokarst lakes bubble with the stuff. And pingos are now starting to erupt as the ice relinquishes the soils of Siberia.

The agency can use custom installers tailored to the version of Windows and antivirus software a user is running. The documents also detail persistence mechanisms, those tools that malware uses to evade detection.

How to get people to exercise

Well worth the effort to watch – then run!!

Ahmed Manasra has been imprisoned by Israel since he was 13, sentenced to 12 years.

Crimintern: How the Kremlin Uses Russia’s Criminal Networks in Europe

The Russian state is highly criminalised, and the interpenetration of the criminal ‘underworld’ and the political ‘upperworld’ has led the regime to use criminals from time to time as instruments of its rule.

Trump has stocked his administration with a small army of former lobbyists and corporate consultants who are now in the vanguard of the effort to roll back government regulations at the agencies they once sought to influence. Only possibly by weakening ethics rules.

High average temperatures in the first three months of 2016 caused a dramatic spike in the amount of meltwater flowing from the Kaskawulsh glacier, carving a deep canyon in the ice and redirecting the flow toward the Alsek River in the south, rather than the north-flowing Slims River. That changed the Slims River from a three-metre-deep, raging torrent to a place where “massive afternoon dust storms occurred almost daily”

Pair of new studies show how climate refugees will ‘reshape’ population landscape of the nation. The idea of a person becoming a climate change refugee seems too foreign for most people.

More than two dozen US insurers affiliated with Travelers Cos have sued two Saudi banks, companies affiliated with Osama bin Laden’s family, and several charities for at least $4.2 billion over the September 11 attacks.

Government sponsored studies have reported that between 8712 and 11,937 tonnes of litter enter Australia’s marine environment each year, in addition to 6000 tonnes of waste related to fishing and other types of maritime activities.

Don’t Poison Yourself: A Warning

It kills the honey bees and other pollinators as it enters their bodies through their pollinating and gathering nectar. They get something comparable to Alzheimer’s and can’t make it back to the hive since their brains get confused from the toxin. Instead they just fly around aimlessly and, eventually, die while grounded, and while aimlessly kicking legs  and shaking across their bodies from nerve damage as their brains eventually shut-off from the chemical assault.

93% of the urine tested by the University of California San Francisco lab tested positive for glyphosate residues. No glyphosate was found in the tap water samples.

Australia’s two largest legacy media organisations recently announced big cuts to their journalistic staff. Many editorial positions, perhaps up to 120, will disappear at Fairfax Media, and News Corporation announced the sacking of most of its photographers and editorial production staff.

A chilling new report by Amnesty International exposes the Syrian government’s calculated campaign of extrajudicial executions by mass hangings at Saydnaya Prison. Between 2011 and 2015, every week and often twice a week, groups of up to 50 people were taken out of their prison cells and hanged to death. In five years, as many as 13,000 people, most of them civilians believed to be opposed to the government,

Trump famously changed his policy on Syria after seeing photographs of a couple Syrian children killed by a chemical attack. In targeting the Assad regime, Trump was moved by the tragedy, not the statistic. When it comes to world hunger, Trump’s resistance to statistics is even more appalling. There are now 1.4 million children at risk of dying from famine. No one apparently has shown Donald Trump, or his daughter Ivanka, any photos of these at-risk children. So, the president is comfortably ignoring this statistic.

10 Companies That Control Just about Everything You Eat 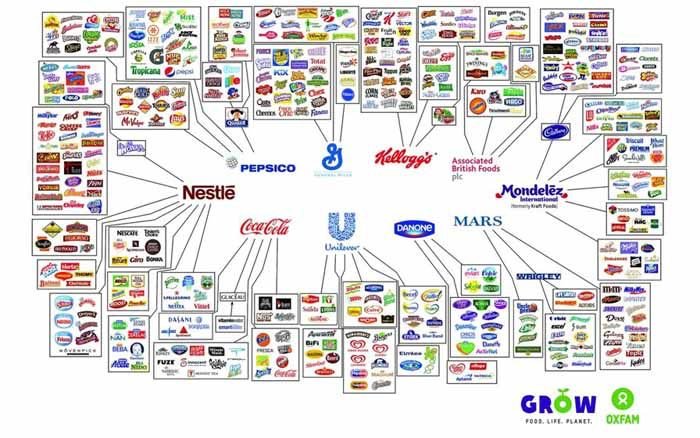