We don’t want a history lesson. How does that help us get peace? We’ve read enough books

First Harvey, then Irma, now Jose, and soon Maria. Four massive storms in a row, each rewriting meteorological history with their sheer size and strength — and hurricane season does not end until November. This is what climate change looks like: More water in the atmosphere makes for larger, stronger storms

5 exabytes of data were generated between 12,000 BC and 2003 AD. We produce this amount every two days now 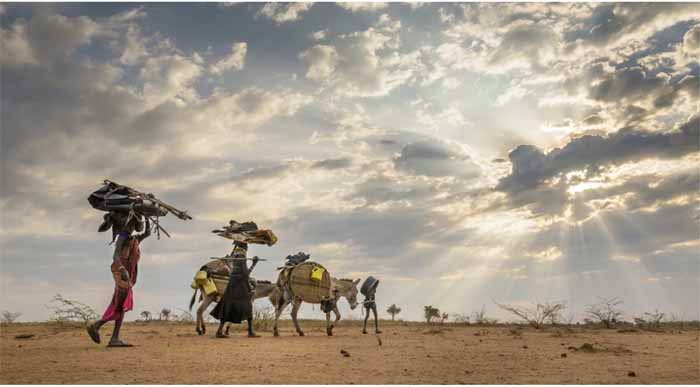 Why Kenya has plunged into crisis

In the eighties, Kenya was food secure, with weather disruption of this level coming at least no more than once in 10 years,” he recalls. “Over the last two decades this has changed, and now we see it once every other year. The rains used to be predictable. Farmers used to be able to say: ‘by this date, we are expecting the rains and therefore we can plant’.”Now, he says, “when rains do come, instead of steady, manageable fall for say, one month, we’ll have an intense downpour over a day or two and then problems such as flash flooding.”

Population growth in Africa: grasping the scale of the challenge

In the past year the population of the African continent grew by 30 million. By the year 2050, annual increases will exceed 42 million and total will have doubled to 2.4 billion.

This comes to 3.5 million more people per month, or 80 additional people per minute. At that point, African population growth would be able to re-fill an empty London five times a year. The dynamics at play are straightforward. Since the middle of the last century, improvements in public health have led to a inspiring decrease in infant and child mortality rates.  The total fertility rate of Africa is 88% higher than the world standard (2.5 children per woman globally, 4.7 children per woman in Africa).

Why Danish Vikings moved to England

As many as 35,000 Vikings migrated from Denmark to England, but why? The English countryside was far from fully cultivated at this time, which probably played a role. So peasants from Jutland (Denmark) or Norway could thus find a relatively fertile land, where you could easily achieve a lucrative life.

Supercomputers: to Moore’s law and beyond

In 1965, a year after the world’s first supercomputer was commissioned, Gordon Moore predicted that the number if components per integrated circuit would double every year for a decade…..

the world is now firmly in a 1 to 1.2 C above 1880s temperature zone. Such a zone is one that is well outside of typical recent human experience. One that will tend to continue to produce unsettling and harmful weather and climate extremes. Furthermore, increasingly harmful climate change related events are likely to more swiftly ramp up with each additional 0.1 C in global temperature increase and as the world approaches the 1.5 C to 2 C threshold.

water temperatures in the tropical parts of the oceans are already nearing the upper temperature range of what many of the fish living there now can survive. Given how rapidly temperatures are now warming, and the limits to adaptability in many fish species, it seems likely then that the tropical oceans will lose a great deal of biodiversity over the coming century.

Fishing communities battle the law and a depleted ocean

“We are not a department of fisheries, but a department for people who fish.” The struggle between the need to fish to live and the need for quotas with only 2.5% of pre-fishing stocks of lobster left, and abalone stocks down to 15% quotas.

“Heatwaves like Lucifer, which fanned forest fires and damaged crops in Europe in August, are now at least four times more common than they were a century ago,

What Will Happen To Indian Subcontinent’s ~2 Billion People As Temperatures Soar?

About 30% of the population across the region would be exposed to the scalding temperatures, up from 0% at present, the report added. The densely populated, rural farming regions of the subcontinent could be hit the hardest, where workers are exposed to heat with little or no chance to retreat to air-conditioning. Pakistan continues to be one of the world’s most vulnerable countries to the effects of climate change, with its northern glaciers melting and population surging along with fast diminishing water supplies.”

The world’s tropical forests are so degraded they have become a source rather than a sink of carbon emissions, according to a new study that highlights the urgent need to protect and restore the Amazon and similar regions. Researchers found that forest areas in South America, Africa and Asia – which have until recently played a key role in absorbing greenhouse gases – are now releasing 425 teragrams of carbon annually, which is more than all the traffic in the United States.

US anti-missile systems have never been realistically tested

Neither Japan nor the US could have intercepted the recent missiles. None of the missile defence weapons can reach that high.  If North Korea cooperated and shot their new intercontinental ballistic missile, the Hwasong-14, at the US with adequate warning  and if the warhead looked pretty much like we expect it to look, and if they only shot one, and if they did not try to spoof the defence with decoys that looked like the warhead, or block the defence with low-power jammers, or hide the warhead in a cloud of chaff, or blind the defence by attacking the vulnerable radars, then…. Maybe.

Denial is driven partly by dominant personality and low empathy, and partly by motivation to justify and promote existing social and human-nature hierarchies. We conclude by suggesting that climate change mitigation efforts could be more successful if framed as being clearly beneficial for everybody and non-threatening to existing social order.

Since the major solution to climate change is ending fossil fuel use, it is nonsensical to hope for a solution that it “beneficial for everybody.”

In a world of 9 billion undereducated people without work – Expect the Luddites well before that.

Machines will be better than us at translating languages by 2024 and writing school essays by 2026, they claimed. Within ten years computers will be better at driving a truck than us and by 2031 they will be better at selling goods and will put millions of retail workers on the dole queue. AI will write a bestselling book by 2049 and conduct surgery by 2053,

Throughout the world, some 430 reactors are in various stages of vulnerability to natural disaster, including ninety-nine in the United States. Numerous nuclear plants have already been damaged by earthquakes, storms, tsunamis, and floods. The complete blackout of any serious discussion of what Harvey and Irma threatened to do to these six Texas and Florida reactors is cause for deep concern.

The list of diseases linked to air pollution is growing

Inhaling pollutants triggers a flurry of physiological coping mechanisms throughout the body. “Until 20 years ago, we thought that air pollution affected only the respiratory system,”  the American Heart Association published a consensus statement laying out “a strong case that air pollution increases the risk of cardiovascular disease,” the leading cause of US deaths as well as Parkinsons, diabetes, alzheimers, obesity.

Uncle Sam vs. Russia in Eastern Syria: the Nightmare Scenario

The impending collapse of ISIS has touched off a race for territory in the oil-rich eastern part of Syria pitting US-backed forces against the Russian-led coalition of Syria, Iran and Hezbollah.  This is the nightmare scenario that everyone wanted to avoid.  Washington and Moscow’s armies are now converging on the same area at the same time greatly increasing the probability of a conflagration between the two nuclear-armed superpowers.  It means that Russia will support Assad’s attempts to liberate the oil fields even if it triggers a broader war with the US. Putin doesn’t want to fight the US, but he’s not going to abandon an ally either.  So there’s going to be a confrontation because neither party is willing to give up what they feel they need to achieve success. As the standoff begins to take shape in east Syria, the two rival superpowers are preparing themselves for the worst.  Clearly, we have reached the most dangerous moment in the six year-long war.

Russian Special Forces Issue a Stark Warning to US

Russia unequivocally told the commanders of US forces in Al Udeid Airbase (Qatar) that it will not tolerate any shelling from the areas where the SDF are stationed (…)  Fire from positions in regions [controlled by the SDF] will be suppressed by all means necessary.

The climate factor in Syrian instability

The research to date is clear that climate change made the extreme drought in Syria 2-3 times more likely, “contributed to” social unrest in Syria prior to the civil war by multiplying risks to agricultural lands and rangelands, particularly but not exclusively in the northeast. In this context, the drought was one of a number of other environmental, economic and governance factors – including natural resource mismanagement by the Assad regime – contributing to the mass displacement of a significant number of Syrians, and thus potentially increasing the “likelihood” of conflict.

Food security: how drought and rising prices led to conflict in Syria

Why the US Refuses a Korea Peace Treaty

American actions were a monumental violation of the Geneva Convention which had only just been signed in 1949, forbidding the indiscriminate killing of civilians. The ink was barely dry when American forces were running rivers of blood all over Korea. The communist guerrillas also reportedly carried out atrocities. But in no comparable way to the scale that the US was committing.That is why the all-important issue of a peace treaty over the Korean War is not signed by the US. It is simply too shameful a subject to even revisit in the slightest way.

Monsanto had a hand in the retraction of a groundbreaking study that left little doubt about the dangers of glyphosate in a prominent food science journal. Monsanto will do anything to protect the reputation of Roundup and its other herbicide products – which earned them $1.9 billion in gross profits in 2015 alone – and that includes silencing their detractors.

How Big Business Got Brazil Hooked on Junk Food

As multinational companies push deeper into the developing world, they are transforming local agriculture, spurring farmers to abandon subsistence crops in favor of cash commodities like sugar cane, corn and soybeans — the building blocks for many industrial food products. Across the world, more people are now obese than underweight. At the same time, scientists say, the growing availability of high-calorie, nutrient-poor foods is generating a new type of malnutrition, one in which a growing number of people are both overweight and undernourished. “The prevailing story is that this is the best of all possible worlds — cheap food, widely available. If you don’t think about it too hard, it makes sense,” said Anthony Winson, who studies the political economics of nutrition at the University of Guelph in Ontario. A closer look, however, reveals a much different story, he said. “To put it in stark terms: The diet is killing us.”