The most pollies offer is more economic growth: the fairy dust supposed to make all the bad stuff disappear. Never mind that it drives ecological destruction, that it has failed to relieve structural unemployment or soaring inequality, that, in some recent years, almost all the increment in incomes has been harvested by the top 1%. As values, principles and moral purpose are lost, the promise of growth is all that’s left.

Silence, they say, is the voice of complicity. But silence is impossible. Silence screams. Silence is a message. Just doing nothing is an act. There’s no sidestepping your own responsibility. You become your own message. You are the message.

Truth is such a precious commodity that it must be protected by a bodyguard of lies.

I think when you come to sarin gas, there was no — he was not using the gas on his own people the same way that Ashad (sic) is doing. I mean, there was clearly, I understand your point, thank you. Thank you, I appreciate that. There was not in the, he brought them into the Holocaust center, I understand that. What I am saying in the way that Assad used them, where he went into towns, dropped them down to innocent, into the middle of towns, it was brought — so the use of it. And I appreciate the clarification there. That was not the intent.

“All of these (household) batteries across the island will be aggregated, They’ll appear to us as one big battery, so our control room operators will have the ability to use this battery at peak times.”

Current Arctic warming is almost unheard of in past 2.5 million years

“The geological data is pretty clear that [the Barnes Ice Cap] almost never disappears in the interglacial times. The fact that it’s disappearing now says we’re really outside of what we’ve experienced in a two-and-a-half million-year interval and we’re entering a new climate state.”

An Armada of Icebergs Has Just Invaded The North Atlantic

“I have about a decade of experience with the Ice Patrol, and in my time here I’ve never seen anything like this or heard of anything like this before.” The number this week is nearly 6 times the annual average for this time of year at 83. More icebergs are calving from great masses of ice along the west-central coast of Greenland. Speed of ice discharge has about double. And new studies indicate that ice mass loss all around coastal Greenland is accelerating even as many glaciers have now reached a point of no return 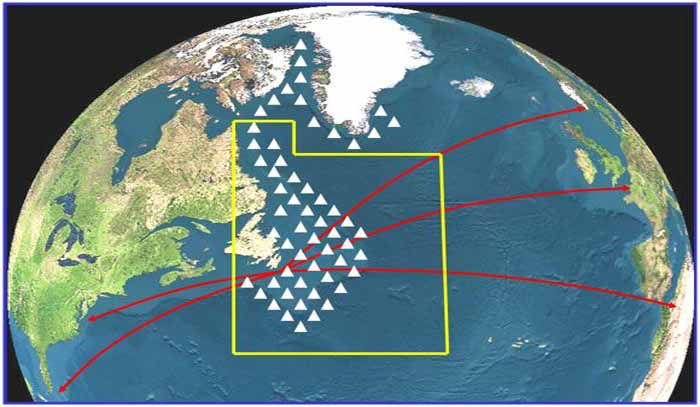 Trump to Ax Amtrak for 220 Cities

In addition to slashing funding for the arts, education programs, climate change research, and worker protections (among many other things), another lesser known casualty of President Donald Trump’s “morally obscene” budget proposal: Amtrak. “It’s ironic that Trump’s first budget proposal undermines the very communities whose economic hardship and sense of isolation from the rest of the country helped propel him into office. These working class communities lose a vital service that connects these small town economies to the rest of the US.

The Sixth Great Extinction Is Underway—and We’re to Blame

Human-driven decline in the populations of all species by 25% over the past 500 years. Up to a third of all species of vertebrates are now considered threatened, as are 45% of most species of invertebrates. Among the vertebrates, amphibians are getting clobbered, with 41% of species in trouble, compared to just 17% of birds—at least so far. The various orders of insects suffer differently too: 35% of butterflies and nearly 100% of crickets, grasshoppers and katydids. Look your last.

The Australian Panel on Extreme Heat and Health

The challenges of climate change and extreme heat events for human health and the health sector, and what needs to be done to better prepare for the worsened conditions which will likely be experienced in coming decades. 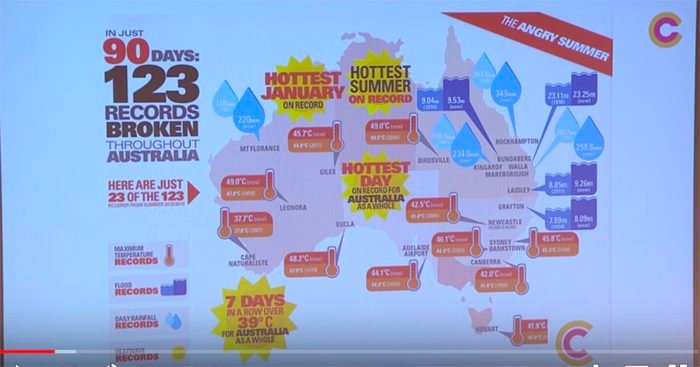 The reef can recover from bleaching events, providing it doesn’t get bleached over and over again. Tackling the root cause of the bleaching, climate change driven by pollution from fossil fuels is crucial to the long term survival of the reef. While the bleaching is unfolding, Prime Minister Turnbull has met with the Chairman of the Adani group in India to reiterate Australia’s support of the monster north Queensland Carmichael coal mine. This follows Queensland Premier Annastacia Palaszczuk’s visit to India in March.

20 million at risk of starvation in world’s largest crisis since 1945, UN

More than 20 million people across four countries face starvation and famine. Without collective and coordinated global efforts, people will simply starve to death. Many more will suffer and die from disease.” Drought, impending famine and the presence of terrorist group Al-Shabaab have left the country and its people in a desperate situation.

SYRIA AND FALSE NEWS and with more military men in the US Administration than ever before we face the real possibility of nuclear war in the Middle East and Korea, all through provocation from the US.

It can be shown  that the document does not provide any evidence whatsoever that the US government has concrete knowledge that the government of Syria was the source of the chemical attack. Read it in full.

Why would the Syrian president, Bashar Assad, order such an attack with no strategic benefits, using banned chemical weapons against a handful of innocent civilians and risk international condemnation? There are two forces at work around the President, competing to steer his foreign policy in their desired direction. One group, perhaps masterminded by Steve Bannon, prefers to disengage from involvements in the spreading global conflicts as much and as soon as possible and, instead, to focus on the internal security and prosperity of the nation, regardless of what kind of mess is left behind. The opposing group is intent on pushing America’s foreign policies in directions that would perpetuate the division and unrest in that region. The scale seems to be tilting in favor of the latter group!

The main objection to the resolution is that it apportioned blame prior to an objective outside investigation of the incident.

It seems clear that the strikes will complicate our efforts to pursue our counter-ISIS campaign in Syria. The ability to carry out US airstrikes against ISIS requires some degree of cooperation with Russia, which is now in serious jeopardy.

There was no Syrian “chemical weapons attack.” Instead, a Syrian aircraft bombed an al-Qaeda-in-Syria ammunition depot that turned out to be full of noxious chemicals and a strong wind blew the chemical-laden cloud over a nearby village where many consequently died. This is what the Russians and Syrians have been saying and – more important –what they appear to believe happened.

US missile strike on Syria ‘a violation of international law’

An airstrike, like any other attack on a state, requires a mandate from the UN Security Council. According to the UN Charter, all five great international powers, must, as permanent members, approve of a military attack. Or in exceptional cases – if there is no UN mandate – a case must be made for self-defense.

Trump was, whether he knew it or not, testing a theory that has long drawn skepticism among scholars of war. That theory: that the U can alter an adversary’s strategic calculus — at little cost and with little risk of American deaths or a tit-for-tat cycle of violence — with limited, symbolic and punitive strikes.

Leaked emails from defense contractor refers to chemical weapons saying ‘the idea is approved by Washington’. The emails were released by a Malaysian hacker who also obtained senior executives resumés and copies of passports via an unprotected company server, according to Cyber War News.

The “chemical attack” was fake. This video for example, of doctors and patients in emergence rooms was theater, taken over a longer time period. The main presenter was a well-known Takfiri but with links to British services. The whole show was perfected, by specialists one would think, to fit for US screens. The male “victims” were clean shaven, despite living in al-Qaeda land. They even had two blond “Syrian” kids in there to convince the racists that “revenge” was needed.

Shows how much poison gas the US allies possess. Well worth a read.

The attack was evidence to the close coordination that exists between terrorist groups operating inside Syria and their sponsors to level accusations of chemical weapons use against the Syrian government forces, and also proved that the militants were in possession of chemical warfare.

He said what happened in Khan Shaikhoun is a fabricated story, stressing that Syria does not possess a chemical arsenal and that even if it has such an arsenal, it will not use it. He made it clear that Syria can only allow any investigation in the Khan Sheikhoun incident when it’s impartial.