Timing a Rise in Sea Level

Timing a Rise in Sea Level 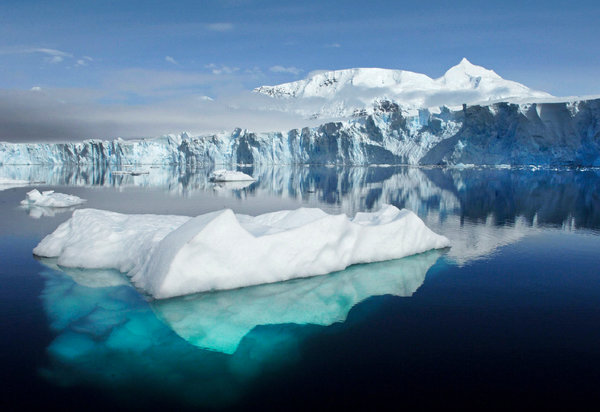 The fast-retreating Sheldon Glacier in Antarctica. A collapse of a polar ice sheet could result in a jump in sea level.

Thirty-five years ago, a scientist named John H. Mercer issued a warning. By then it was already becoming clear that human emissions would warm the earth, and Dr. Mercer had begun thinking deeply about the consequences.

His paper, in the journal Nature, was titled “West Antarctic Ice Sheet and CO2 Greenhouse Effect: A Threat of Disaster.” In it, Dr. Mercer pointed out the unusual topography of the ice sheet sitting over the western part of Antarctica. Much of it is below sea level, in a sort of bowl, and he said that a climatic warming could cause the whole thing to degrade rapidly on a geologic time scale, leading to a possible rise in sea level of 16 feet.

While it is clear by now that we are in the early stages of what is likely to be a substantial rise in sea level, we still do not know if Dr. Mercer was right about a dangerous instability that could cause that rise to happen rapidly, in geologic time. We may be getting closer to figuring that out. An intriguing new paper comes from Michael J. O’Leary of Curtin University in Australia and five colleagues scattered around the world. Dr. O’Leary has spent more than a decade exploring the remote western coast of Australia, considered one of the best places in the world to study sea levels of the past.

The paper, published July 28 in Nature Geoscience, focuses on a warm period in the earth’s history that preceded the most recent ice age. In that epoch, sometimes called the Eemian, the planetary temperature was similar to levels we may see in coming decades as a result of human emissions, so it is considered a possible indicator of things to come.

Examining elevated fossil beaches and coral reefs along more than a thousand miles of coast, Dr. O’Leary’s group confirmed something we pretty much already knew. In the warmer world of the Eemian, sea level stabilized for several thousand years at about 10 to 12 feet above modern sea level.

The interesting part is what happened after that. Dr. O’Leary’s group found what they consider to be compelling evidence that near the end of the Eemian, sea level jumped by another 17 feet or so, to settle at close to 30 feet above the modern level, before beginning to fall as the ice age set in.

In an interview, Dr. O’Leary told me he was confident that the 17-foot jump happened in less than a thousand years — how much less, he cannot be sure.

This finding is something of a vindication for one member of the team, a North Carolina field geologist, Paul J. Hearty. He had argued for decades that the rock record suggested a jump of this sort, but only recently have measurement and modeling techniques reached the level of precision needed to nail the case.

We have to see if their results withstand critical scrutiny. A sea-level scientist not involved in the work, Andrea Dutton of the University of Florida, said the paper had failed to disclose enough detailed information about the field sites to allow her to judge the overall conclusion. But if the work does hold up, the implications are profound. The only possible explanation for such a large, rapid jump in sea level is the catastrophic collapse of a polar ice sheet, on either Greenland or Antarctica.

Dr. O’Leary is not prepared to say which; figuring that out is the group’s next project. But a 17-foot rise in less than a thousand years, a geologic instant, has to mean that one or both ice sheets contain some profound instability that can be set off by a warmer climate.

That, of course, augurs poorly for humans. Scientists at Stanford calculated recently that human emissions are causing the climate to change many times faster than at any point since the dinosaurs died out. We are pushing the climate system so hard that, if the ice sheets do have a threshold of some kind, we stand a good chance of exceeding it.

Another recent paper, by Anders Levermann of the Potsdam Institute for Climate Impact Research in Germany and a half-dozen colleagues, implies that even if emissions were to stop tomorrow, we have probably locked in several feet of sea level rise over the long term.

Benjamin Strauss and his colleagues at Climate Central, an independent group of scientists and journalists in Princeton, that reports climate research, translated the Levermann results into graphical form, and showed the difference it could make if we launched an aggressive program to control emissions. By 2100, their calculations suggest, continuing on our current path would mean locking in a long-term sea level rise of 23 feet, but aggressive emission cuts could limit that to seven feet.

If you are the mayor of Miami or of a beach town in New Jersey, you may be asking yourself: Exactly how long is all this going to take to play out?

On that crucial point, alas, our science is still nearly blind. Scientists can look at the rocks and see indisputable evidence of jumps in sea level, and they can associate those with relatively modest increases in global temperature. But the nature of the evidence is such that it is hard to tell the difference between something that happened in a thousand years and something that happened in a hundred.

On the human time scale, of course, that is all the difference in the world. If sea level is going to rise by, say, 30 feet over several thousand years, that is quite a lot of time to adjust — to pull back from the beaches, to reinforce major cities, and to develop technologies to help us cope.

But if sea level is capable of rising several feet per century, as Dr. O’Leary’s paper would seem to imply and as many other scientists believe, then babies being born now could live to see the early stages of a global calamity.

A version of this article appeared in print on August 13, 2013, on page D6 of the New York edition with the headline: Timing a Rise in Sea Level.