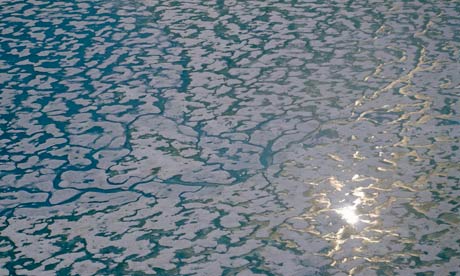 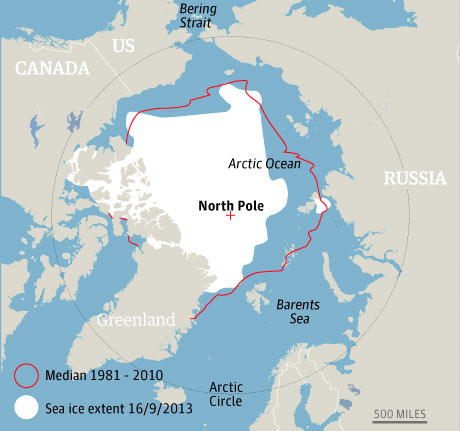 Arctic sea ice extent September 2013. Photograph: guardian.co.ukSea ice cover in the Arctic has shrunk to one of its smallest extents on record, bringing the days of an entirely ice-free Arctic during the summer a step closer.

The annual sea ice minimum of 5,099m sq km reached last Friday was not as extreme as last year, when the collapse of ice cover broke all previous records.

But it was still the sixth lowest Arctic sea ice minimum on record, and well below the average set over the past 30 years of satellite records.

This suggests the Arctic will be entirely ice-free in the summer months within decades, scientists said.

The annual sea ice minimum, based on a five-day average, is expected to be officially declared by the US National Snow and Ice Data Centre in Boulder, Colorado, within the next few days.

Overall, the Arctic has lost about 40% of its sea ice cover since 1980. Most scientists believe the ocean at the north pole could be entirely ice-free in the summer by the middle of the century – if not sooner. 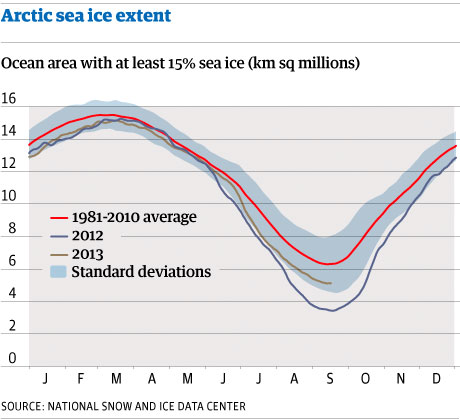 Arctic sea ice extent graph. Photograph: guardian.co.ukThe most dramatic changes have occurred in the past decade. The seven summers with the lowest sea ice minimums were all in the past seven years.

The loss of sea ice cover is a leading indicator of climate change, and will be a key part of the findings released next week by the United Nations’ climate science panel, the IPCC. It has also emerged as a driver of extreme weather events in Europe.

The extent of Arctic sea ice has generally decreased in all regions since satellite records began in the late 1970s. The Arctic continues to warm at about twice the rate of lower latitudes.

This year’s minimum was reached despite cooler temperatures in some areas that slowed melting, Stroeve said. Air temperatures in the central Arctic were 1-4C colder than in the past six years.

“We had a pretty cold summer in general for the time period we’re looking at and yet the sea ice cover didn’t recover to the extent that we had in the 1970s and 1980s,” she said.

Rapid warming last year reduced the area of frozen ocean water in the Arctic to less than 3.5m sq km.

But the decline of the surface area of frozen water tells only part of the story, scientists said.

Ice in the Arctic has also been thinning over the years – which makes it more vulnerable to melting in the summer.

Scientists now believe it is the combination of reduction in thickness and surface area that is hastening the advent of an ice-free Arctic in the summer months.

Last March and April – typically the time of year when the ice floes are at their thickest – there was just 15,000 cubic km of ice.

There would have been 30,000 cubic km, or twice that volume, at the height of winter 30 years ago, scientists said.

“There is very little thick multi-year ice left covering these great areas. It is really thin so if you get a little weather the next year, it’s all gone,” said Andreas Münchow, a scientist at the University of Delaware who studies the Arctic.

The loss of the thicker, multi-year ice was also one reason for the larger year-to-year changes in Arctic ice cover, Münchow said.

But the overall direction of sea ice cover in the Arctic was clear, he added. “We really are heading towards an ice-free Arctic in the summer.

“It just takes a freak event eventually, in the next five or 10 or even 20 years, and the next year there will be a huge Arctic cover. But it is all going to be thin on top, and the long-term trend is that the ice is disappearing in the summer in the Arctic.”

“Our Arts, Our Stories” by Chris MaverPrev
Return of the steam engine: cheap storage for solarNext