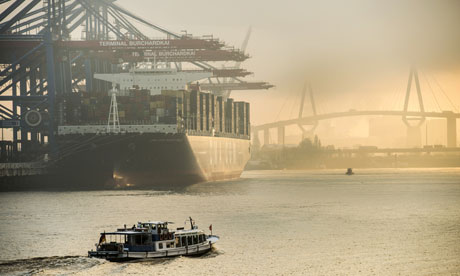 Owners of large ships using EU ports will have to measure and report annual carbon emissions from January 2018 under new European commission proposals published on Friday.

The plans stop short of including shipping emissions in the EU carbon market, but the commission says they can still have an impact and are part of its work towards global emissions agreements.

“The EU monitoring system will bring environmental and economic gains for the shipping sector by increasing transparency about emissions and creating an incentive for ship-owners to cut them,” Connie Hedegaard, EU commissioner for climate action, said in a statement.

The proposals are subject to months of debate and will need approval from EU member states and the European parliament before they can become law.

They would create an EU-wide legal framework for collecting and publishing verified annual data on CO2 emissions from all large ships (defined as more than 5,000 gross tons) that use EU ports, irrespective of where the ships are registered.

Owners – such as Denmark’s AP Moller-Maersk A/S, the group behind the world’s biggest container shipping operator – will also be required to provide other information, such as data to determine the ships’ energy efficiency.

The commission said the EU-wide monitoring system should cut emissions from the journeys covered by up to 2% and could also help to reduce costs to owners.

Debate on how to handle shipping emissions, which the commission estimates account for 3% of global and 4% of EU greenhouse gas emissions, has rumbled on for years with little progress.

Without action, shipping emissions are expected to more than double by 2050 as transport demand increases.

Preliminary discussions between EU member states and the shipping industry addressed the option of including emissions in the emissions trading scheme.

But there is little chance of that happening in the short term, given the international outcry and threats of a trade war that followed an earlier decision to expand the carbon trading scheme to include all flights to and from EU airports.

As a result, the EU agreed to freeze the charge on intercontinental flights for a year to give the UN International Civil Aviation Organisation (ICAO) a chance to come up with an alternative.

Talks are already under way at the International Maritime Organisation on a global deal for shipping emissions. The EC says its measures on both shipping and airlines are only being introduced pending a worldwide agreement and the EU shipping rules would be modified if necessary to conform to any global standards, if agreed.