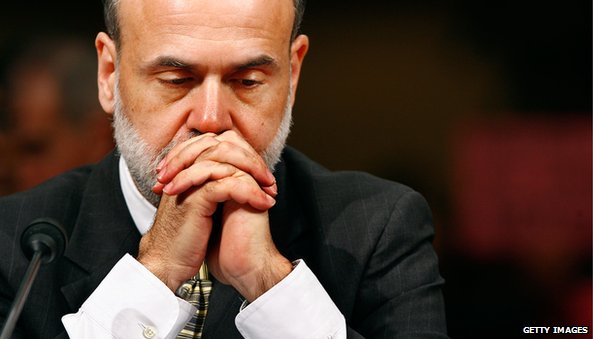 During the 2008 financial crisis, the US Federal Reserve struggled to grasp the scope of the problem and how to adequately respond, transcripts reveal.

After a five-year wait, the central bank released the records of a total of 14 meetings from 2008.

The transcripts offer the clearest insights yet into the central bank’s thinking during the crisis.

Overall, the documents paint a picture of the Fed that shows that it worried perhaps more than it should about inflation risks, and failed to grasp initially the full impact of the housing market crisis.

However, once the extent of the problems were known, the central bank was largely in agreement about moving decisively to prevent the next Great Depression from occurring.

‘I am very concerned’

The hundreds of pages of transcripts underscore the difficulty of coping with the financial crisis and the Fed’s scramble to react to events like the collapse of Bear Sterns in March of 2008.

Minutes from the 16 September 2008 meeting – which took place a day after the Fed had allowed Lehman Brothers to fail – show that Mr Bernanke and other Fed officials were grappling with the implications of bailing out some institutions and not others.

Mr Bernanke worried about the “ad hoc” nature of deciding who to bail out, while noting “the real possibility in some cases that you might have very severe consequences for the financial system and, therefore, for the economy of not taking action.”

However, overall the September transcripts indicate that most members of the Fed thought the crisis was contained.

At another point, Mr Bernanke said: “I think that our policy is looking actually pretty good,” indicating he thought that a move by the central bank earlier in 2008 to trim interest rates had stemmed the tide of the crisis.

After that meeting concluded with the bank keeping its benchmark interest rate at 2%, just two days later, Mr Bernanke and Treasury Secretary Henry Paulson were forced to speak to members of Congress, advising them to agree to a bailout of the banking system.

‘A witch’s brew’The transcripts also give an insight into current Fed chair Janet Yellen’s involvement with its decisions during the crisis.

Although Ms Yellen went along with the decision to keep rates steady in September, she warned during the same meeting: “I am very concerned about downside risks to the real economy and think that inflation risk is diminished.”

At an October meeting, Ms Yellen noted the dire events that had occurred that year, saying the Fed had received “witch’s brew of news”.

“The downward trajectory of economic data,” Yellen went on, “has been hair-raising”.

“It is becoming abundantly clear that we are in the midst of a serious global meltdown,” she said.