Following candidates around my electorate has proven a hit and miss affair at the same time as everyone’s getting ready for Christmas.

Aware that she would be rallying the troops last weekend, I kept missing Terri Butler, but it was not hard to spot her supporters in their red t-shirts, emblazoned with ‘Labor and Local’.

The slogan might be an indicator of how Butler is pitching her campaign, although I suspect it was more an opportunity to familiarise the electorate with her image rather than with her policy positions.

Some supporters were happy to pose, others were not so keen, but, as you would expect, all were optimistic about their new candidate and her chances of winning.

Bill Glasson and his LNP supporters, who have been very active over the past couple of weekends, must have decided to take a break so close to Christmas, since there was no sign of them on the streets at all. 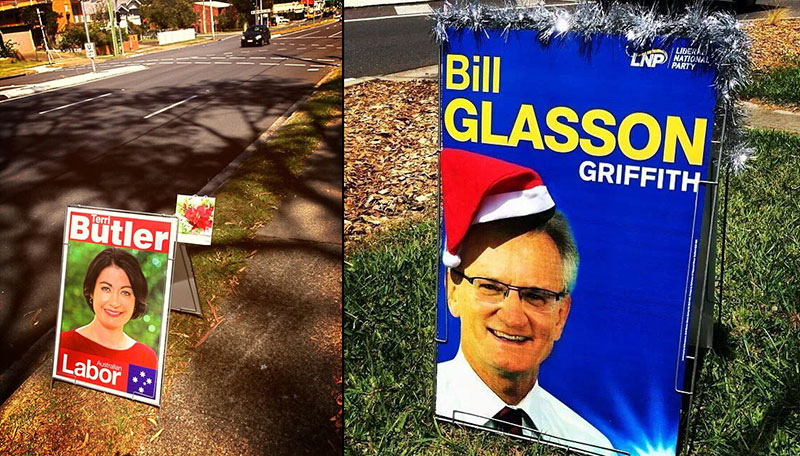 Geoff Ebbs put out a late call to his Greens supporters to join him on Sunday morning at the Boggo Road Ecosciences Centre in Dutton Park. Ebbs had chosen the Ecosciences Centre, he said, to protest the Abbott Government’s cuts to science and education funding.

Being an eager citizen journalist, I turned up early, but there was not a Green t-shirt to be seen!

He was planning similar stops later on the day at Griffith University and the ABC, both based in the electorate on Brisbane’s South Bank, so hopefully he got a better turnout for those events.

Engagement with the electorate via social media can be fraught with danger for candidates, as I think Glasson may have learned recently.

Glasson is not a user of Twitter, but he does have a very active Facebook page. In a curious move last week, he invited his Facebook followers to comment on Treasurer Hockey’s controversial and polarising Mid Year Economic and Fiscal Outlook statement, and was later compelled to post: “Good to see some hearty debate – please remember to always be respectful and never resort to personal attacks. Offending users will be banned.”

It’s hard to know whether the comments still listed on his site are a mere selection of what had been provided. While freedom of speech is championed by the Coalition, apparently there is a need to impose limits, even for them.

It seems that Butler, Ebbs and Glasson are still in the process of working out how they will tackle this campaign.

Labor and the Greens are already focussing on what many consider has been a poor start for Tony Abbott and his new government. They are taking aim at the impacts of the Government’s funding decisions on education and other services.

In the coming weeks, Bill Glasson will have to assess how much traction these issues have gained with local voters, and decide whether to align himself with, or distance himself from, his Federal leader. It will be revealing to see whether Tony Abbott will be invited up north to support his candidate in the coming month.

At this stage there is no talk of a candidates’ forum, as occurred on a limited basis in September.

As for the other parties, the Katter Australia Party remains silent on whether it will field a candidate.

Stable Population, which has lodged an application with the Australian Electoral Commission to change its name to the “Sustainable Population Party”, put out a call to its Queensland supporters to suggest potential high profile candidates for the Griffith by-election. They admit, however, that time not on their side.

There’s not much use in shaking our pressies in Griffith – it’s too early to tell exactly what’s inside.