How Much Should You Worry About an Arctic Methane Bomb?

How Much Should You Worry About an Arctic Methane Bomb?

Recent warnings that this greenhouse gas could cost us $60 trillion have received widespread publicity. But many scientists are skeptical. 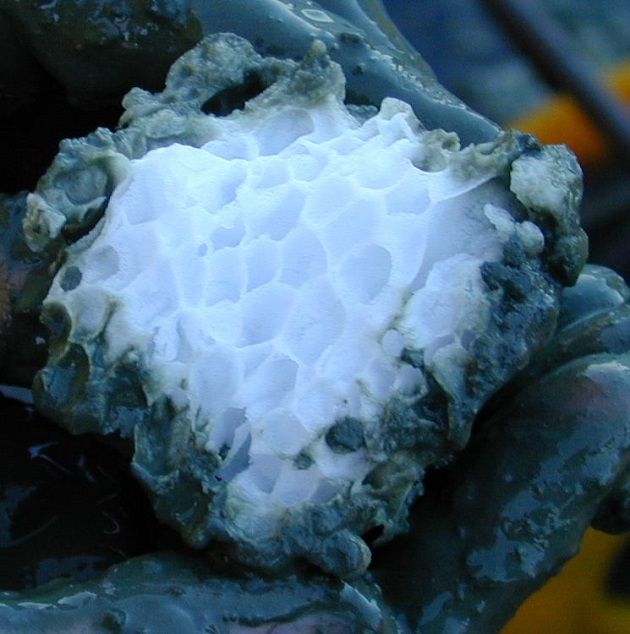 Methane hydrate, taken from the ocean floor off the coast of Oregon Wikimedia Commons

It was a stunning figure: $60 trillion.

Such could be the cost, according to a recent commentary in the journal Nature, of “the release of methane from thawing permafrost beneath the East Siberian Sea, off northern Russia…a figure comparable to the size of the world economy in 2012.” More specifically, the paper described a scenario in which rapid Arctic warming and sea ice retreat lead to a pulse of undersea methane being released into the atmosphere. How much methane? The paper modeled a release of 50 gigatons of this hard-hitting greenhouse gas (a gigaton is equal to a billion metric tons) between 2015 and 2025. This, in turn, would trigger still more warming and gargantuan damage and adaptation costs.

The $60 trillion figure went everywhere, and no wonder. It’s jaw dropping. To provide some perspective, 50 gigatons is 10 times as much methane as currently exists in the atmosphere. Atmospheric methane levels have more than doubled since the industrial revolution, but this would amount to a much sharper increase in a dramatically shorter time frame.

According to the Nature commentary, that methane “is likely to be emitted as the seabed warms, either steadily over 50 years or suddenly.” Such are the scientific assumptions behind the paper’s economic analysis. But are those assumptions realistic—and could that much methane really be released suddenly from the Arctic?

A number of prominent scientists and methane experts interviewed for this article voiced strong skepticism about the Nature paper. “The scenario they used is so unlikely as to be completely pointless talking about,” says Gavin Schmidt, a noted climate researcher at the NASA Goddard Institute for Space Studies in New York.

Schmidt is hardly the only skeptic. “I don’t have any problem with 50 gigatons, but they’ve got the time scale all wrong,” adds David Archer, a geoscientist and expert on methane at the University of Chicago. “I would envision something like that coming out, you know, over the centuries.”

Still, the Nature paper is the most prominent airing yet of concerns that a climate catastrophe could be brought on by the release of Arctic methane that is currently frozen in subsea deposits—concerns that seem to be mounting in lockstep with the dramatic warming of the Arctic. That’s why it’s important to put these fears into context and try to determine just how much weight they ought to be accorded.
Methane on Ice

Let’s start with some basics on methane—CH4—a greenhouse gas that reaches the atmosphere from sources as diverse as wetlands, gas drilling, and cow burps. Compared with carbon dioxide, methane is kind of like the boxer who punches himself out in the early rounds, whereas carbon dioxide goes the distance and wins by TKO. Pound for pound, methane causes some 25 times as much global warming as carbon dioxide does. But it only remains in the atmosphere for about nine years, on average, before chemical processes break it down. Carbon dioxide, in contrast, has a far longer atmospheric residence time.

What this means is that methane is most worrisome if a lot of it gets into the atmosphere over a relatively short time period—precisely the scenario contemplated by the Nature paper. So could that happen?

The answer depends on a complicated and uncertainty-laden issue—the stability of frozen deposits of subsea methane in the Arctic region. Frankly, it’s hard to imagine something harder to study: We’re talking about deposits residing not only beneath one of the world’s most remote and inaccessible oceans, but also beneath the sea floor itself.

Much of the world’s methane is concentrated in the form of so-called gas “hydrates,” icelike solids that form from methane and water at cold temperatures and high pressures, e.g., deep beneath the ocean floor. According to the US Geological Survey, the total global carbon content of such methane hydrates is estimated to equal some 1,800 gigatons (to be sure, there is considerable uncertainty about this estimate).

Cross-section showing the location of methane hydrates, which are most vulnerable to dissolution in regions 2 and 3. Credit: US Geological Survey.

One thousand eight hundred gigatons would create a climate catastrophe if it were all to be suddenly released, but the vast majority of subsea methane is under deep water, and quite stable. Only a relatively small fraction of global methane hydrates are at issue in the Nature paper, and this methane is in a very peculiar situation: It is frozen in the subsea permafrost of relatively shallow continental shelves in the Arctic region. This frozen sediment was once coastline, but was submerged as oceans rose following the last Ice Age. And now, it is being bathed in warmer waters due to the warming of the Arctic.

So how much should we worry that these particular methane hydrates might melt, releasing gas that would then travel through both sediment and seawater to reach the atmosphere? That’s where the scientific debate begins—over both how much methane falls into this category, and how vulnerable it is to the warming that is now gripping the Arctic region.
Peering Beneath the East Siberian Sea

The methane disaster concerns gained major prominence with a 2010 paper in Science by University of Alaska-Fairbanks researcher Natalia Shakhova and her colleagues, who examined methane emissions in a very remote area of the Arctic, the East Siberian Sea north of Russia. The continental shelf underlying this ocean is more than 2 million square kilometers in size, and its subsea permafrost lies only about 50 meters below the sea surface. Traveling to the remote region in Russian ice-breakers, Shakhova’s team sampled water content and air content at the sea surface repeatedly, over a series of years. They found high concentrations of methane in the water—”50% of surface waters are supersaturated with methane,” the paper reported—and some of the gas was also venting from the water into the atmosphere.

Although the Science paper did not contain the figure, it seems clear that Shakhova is the source for the idea that a 50-gigaton release of methane could occur in a short time frame. Or as she put it in a 2008 abstract, “[W]e consider release of up to 50 Gt of predicted amount of hydrate storage as highly possible for abrupt release at any time,” adding that this could lead to “catastrophic greenhouse warming.” The Nature paper cited another 2010 paper by Shakhova and her colleagues in the journal Doklady Earth Sciences, which uses the 50 gigaton figure in discussing possible methane emission scenarios.

Shakhova did not respond to several requests for comment for this article; her automatic email response said she out doing fieldwork. But Peter Wadhams, the Cambridge physicist who is a coauthor of the Nature paper, said that his work relied on that of Shakhova and her team because “they’ve done the most work there, working there every year, doing field observations…we would rather base it on the estimates of the people actually working there, rather than the people who aren’t working there.” Here is a video of Shakhova discussing her research:

The trouble is that at this point, many other scientists don’t accept that work—or rather, don’t agree about its implications. None seem to dispute the actual measurements taken by Shakhova and her team, but as soon as the Science paper came out, a group of researchers questioned the idea that there was any cause for alarm. “A newly discovered [methane] source is not necessarily a changing source, much less a source that is changing in response to Arctic warming,” they wrote. The implication is that perhaps methane has always been in the water at such levels, without methane hydrates having been disturbed—rather, the methane may be from another source. According to one 2011 study, for instance, the observed methane probably came not from hydrates, but simply from “the permafrost’s still adjusting to its new aquatic conditions, even after 8,000 years.” The hydrates, in contrast, are thought to be much deeper below the sea surface, due to basic physical constraints on their formation and stability. According to the US Geological Survey, “in permafrost areas, methane hydrate is not stable until about 225 m depth.”

Indeed, according to Ed Dlugokencky, who monitors global atmospheric methane levels at the National Oceanic and Atmospheric Administration (NOAA), “so far, there has not been a significant increase in methane emissions in the Arctic.” In other words, if methane is really starting to vent into the air in large quantities, Dlugokencky says he isn’t seeing it.

Next Page: “You’ve got to go from the sea floor of 50 meters depth, down to 200 meters where the hydrate is. So that just takes a long time.”