Islay to be entired powered by tides

Islay to be entirely powered by tides

Exclusive: ScottishPower is to build turbines in the Sound of Islay that will generate enough electricity for the island’s 3,500 inhabitants – and its famous distilleries 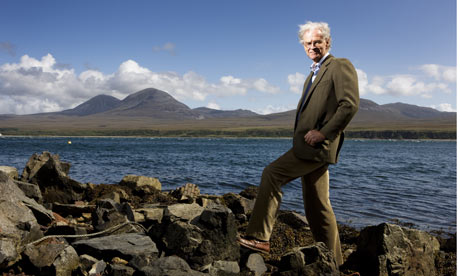 Philip Maxwell, chairman of the Islay Energy Trust, by the Sound of Islay where the ScottishPower turbines will be sited. Photograph: Murdo MacLeod/Murdo MacLeod

ScottishPower is planning a tidal energy project that will supply all the electricity for one of Scotland‘s most famous islands, the Guardian can reveal.

The company is close to signing a supply contract with Diageo, the drinks group, to provide electricity from the project to eight distilleries and maltings on Islay – including the makers of the renowned Laphroaig and Lagavulin whiskies.

The 10MW tidal project, one of the world’s largest, will provide enough electricity for Islay’s 3,500 inhabitants for 23 hours a day.


ScottishPower will submit a planning application in the next couple of months and expects the ten 30-metre underwater turbines to be operational in 2011. The turbines will cost about £50m to install.

The tidal waters in the Sound of Islay, the channel dividing Islay from the Jura, move at up to three metres a second.

Energy companies and representatives from the Scottish government will publish on Wednesday a “marine energy roadmap” outlining how to reach the target of generating up to 2GW (2,000MW) of electricity from tidal and wave power by 2020. It will call for more grants and revenue support to enable developers to build commercial scale demonstration projects, such as the Islay installation, over the next two years.

The renewable energy industry admits the techniques to generate electricity from marine energy are in their infancy. Morna Cannon, from Scottish Renewables, said: “This makes it very hard to pin down the costs of the technology at the moment.”

Alan Mortimer, head of renewables at ScottishPower, admitted tidal energy is more expensive than offshore wind, which costs up to £3m for each megawatt built and itself is only barely economic. Tidal developers earn more subsidies under the Renewable Obligation Scheme than offshore wind, but only once schemes are operational.

Marine energy developers such as Martin Wright, managing director of start-up company MCT, complain that few investors want to risk their money. But the Islay project has heavyweight backers. ScottishPower is owned by Spanish group Iberdrola and has teamed up with Norwegian oil firm StatoilHydro to develop and finance the project.

There is also strong support on the island, although it is by no means universal. Kevin Sutherland, manager of the Islay group of Diageo distilleries, works at the Caol Ila distillery, which overlooks the Sound. The distillery, like the rest of the island, gets the majority of its electricity from the Hunterston nuclear reactor on the mainland. But the reactor is being decommissioned in 2016 and the distillery suffers frequent power cuts in stormy weather when pylons are blown over.

When the tidal project is built, the distilleries on the island will enjoy a much more secure electricity supply, confounding critics of renewable energy – primarily wind power – who say it is intermittent and unreliable.

One of the biggest obstacles for renewables in Britain has been planning permission. Onshore wind applications are frequently rejected because locals object to the visual impact. Because the Islay generators will be on the seabed, no one can see them and the Scottish government will have the final say on planning.

Operating underwater brings its own problems, says Cannon from Scottish Renewables. George J Gillies is a local fisherman who fishes for crab and lobster at either end of the channel in winter. He complains that his lobster nets could get tangled in the turbines and says the project threatens the livelihood of eight local fishing families. But he seems resigned: “If it’s going to generate money, it will get the go-ahead.”

The Islay Energy Trust, a community organisation chaired by Philip Maxwell, has been helping to lobby local politicians and opponents of the project. In return, it will receive a small slice of the revenue to fund community projects on the island, such as a swimming pool