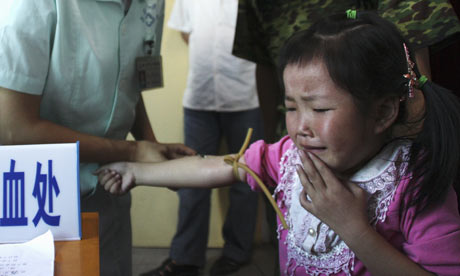 A child who lives near Wugang manganese smelting plant has her blood sample taken to examine the lead levels. Photograph: China Daily/Reuters

More than 1,300 children have been poisoned by a manganese factory in central China, the state media reported today, amid growing fears about the prevalence of heavy metal pollution nationwide.

The exposure of mass lead contamination in Wenping township, Hunan province, is the second case in as many weeks, prompting accusations that the authorities have failed to adequately regulate toxins that build up over time.

A local government official told the Xinhua news agency that tests of children living near the smelter showed that 60-70% had unhealthy levels of lead in their blood. With tests continuing, more positive cases are expected.

The plant reportedly opened in May 2008 without the approval of the local environmental protection bureau within 500m of a primary school, a middle school and a kindergarten.

Although the factory had only been operating for a year, the blood of 1,354 local children was found to have more than 100mg of lead per litre, the limit considered safe.

A gradual build up of lead in the bloodstream can lead to anaemia, muscle weakness and brain damage.

The plant is unlikely to have gone ahead without support from the local government. Many poor districts ignore environmental regulations to attract investment, and Hunan is notorious for its heavy metal industry. The Wugang city government said it had demanded an overhaul of more than 100 plants, including seven other smelters.

But the problem is likely to be nationwide because authorities are not obliged to conduct expensive tests for heavy metals, which tend to accumulate over time rather than be emitted in noticeable bursts.

In a separate case in Shaanxi, northern China, last week, 615 children tested positive for lead poisoning attributed to a nearby smelter, which is now due to cease operating this Saturday

Islay to be entired powered by tidesPrev
Percentage of global population living in cities, by continentNext