Americans are too underinformed to digest information that contradicts what they already know. The media prefers to feed Americans a constant stream of simplified information so they do not have to devote more air time or newsprint to explanations or further investigations. This has infantilized the American public. This then confirms the people can’t handle complex truths.
Tom Fenton

Evil Assad, Evil Gaddafi, Now Evil Putin: How the West Sells War (and Makes a Killing)
Ukraine it is largely about land grabs and western agribusiness GMO plans for her rich and fertile soil. ….. Gaddafi’s regime went from a “a model” and an “important ally” to target of regime change in just a few years. Was this sudden shift in popularity to do with Gaddafi’s plan “to quit selling Libyan oil in US dollars?
http://www.informationclearinghouse.info/article41074.htm

The U.S.-Backed Government In Ukraine Is Starting To Lose The Civil War
The first map shows what the conflict looked like last summer: The territory held by the separatists was mostly limited to areas around the cities of Luhansk and Donetsk; the second at the time of the peace accord… Have seen this in the mainstream media? If not, why not? Could it be that we aren’t supposed to know that the US-backed government in Kiev is losing the war?

The U.S.-Backed Government In Ukraine Is Starting To Lose The Civil War 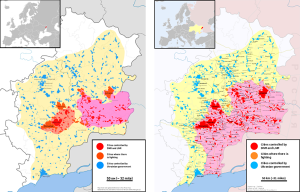 Ukrainian Retreat – the pocket is closed.
Maybe you weren’t told this either?  The trucks lined up on the edge of town around 1 am while tanks and tracked vehicles formed lines on either side of the convoy to shield the soldiers. Despite the precautions, the column came under attack almost immediately and trucks started breaking down and colliding in the dark. By dawn, the column was strung out on the plain and taking fire from all sides. They were shooting at the disintegrating column with rockets. Dead and wounded soldiers were just left on the fields.

German sociologists on Crimea’s choice
In answer to the most important question: “Do you endorse Russia’s annexation of Crimea?” 82% of the respondents answered “yes, definitely,” and another 11% – “yes, for the most part.” Only 2% gave an unambiguously negative response, and another 2% offered a relatively negative assessment.

Obama Destroyed Libya
Gaddafi inherited one of the poorest nations in Africa. By the time he was assassinated, Libya was unquestionably Africa’s most prosperous nation with the highest GDP and life expectancy in Africa. Less people lived below the poverty line than in the Netherlands. Gaddafi was guilty of human rights abuses, but women enjoyed more rights than in any other Arab country. Libya was a relatively sweet place to live.
http://www.informationclearinghouse.info/article41020.htm
Relevant: The Warmongering Record of Hillary Clinton
http://www.counterpunch.org/2015/02/11/the-warmon…

Hailed as a Model for Successful Intervention, Libya Proves to be the Exact Opposite
Since 2011, Libya has rapidly unraveled in much the way Iraq did following invasion: swamped by militia rule, factional warfare, economic devastation, and complete lawlessness. And to their eternal shame, most self-proclaimed “humanitarians” who advocated intervention completely ignored the country once the fun parts — the war victory dances and mocking of war opponents — were over. The unraveling of Libya is now close to absolute.
https://firstlook.org/theintercept/2015/02/16/hailed-model-successful-intervention-libya-proves-exact-opposite/

What Putin learned from Reagan
There was a great power that was worried about its longtime rival’s efforts to undermine it. Its leaders thought the rival power was stronger and trying to throw its weight around and was now interfering in places the declining state had long regarded as its own backyard. To protect this traditional sphere of influence, the worried great power had long maintained one-sided relationships with its neighbors, many of them led by corrupt and brutal oligarchs who stayed in power because they were subservient to the powerful neighbor’s whims. Guess who!

What Putin Learned From Reagan

Michelangelo’s last surviving bronzes identified
“Bacchants Riding On Panthers”, date from 1506-08 and show a muscular pair of nude male revellers, arms raised in triumph to the sky, astride snarling panthers. Michelangelo is thought to have worked on them between his two most famous works — the four-metre marble sculpture “David” and the ceiling of the Sistine Chapel.
http://www.news24.com/Green/News/Michelangelos-last-surviving-bronzes-identified-20150203
One of two bronze statues named ‘Bacchants Riding On Panthers’, thought to be by Italian Renaissance master Michelangelo. (Jack Taylor, AFP) 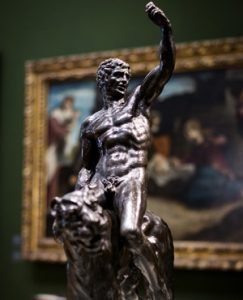