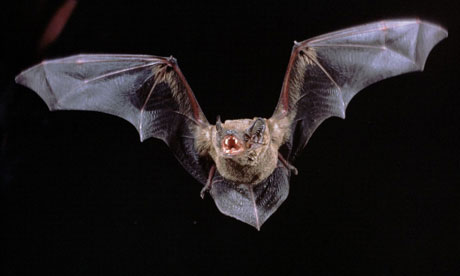 The bats appeared to be unharmed by the radar and returned once it had been switched off. Photograph: Dietmar Nill/Nature Picture Library/Rex Features

Radar beams that irritate bats could be used to prevent the animals from being diced by the spinning blades of wind turbines, according to a study of how the animals react to radar signals. The researchers discovered that a stationary beam reduced bat activity near the turbines by almost 40%.


Bat and bird populations can be significantly effected by collisions with turbines. A six-week study at two wind farms in the US recorded more than 4,500 bat deaths and the Peñascal wind farm in southern Texas is currently using radar to prevent migrating birds from flying into it.

“This is a major problem in the States, especially during the bats’ migratory period,” said Paul Racey of the University of Aberdeen, which undertook the study. The Department for Environment, Food and Rural Affairs recently commissioned a three-year study to gather data on the effect wind farms are having on bats in the UK.

Racey, who co-authored the research, outlined three ways to deter bats using radar in a paper published today in the journal PLoS One. One method employs a rotating antenna similar to those used in air traffic control – bats are known to avoid these large installations and the researchers hoped to replicate the effect with a smaller device. The team also tested a stationary antenna that used two different radar signals that used different pulse lengths.

His results showed that a fixed antenna was most effective at keeping the bats away. Radar signals led to a drop in bat activity of 38.6% in an area 30 metres from the device. The animals appeared to be unharmed by the experience and returned once the radar was switched off. With refinement and purpose-built radar transmitters, the effect could be even greater, said the researchers. “We want 80- 90% reduction in bat activity,” said Racey.

Scientists don’t know why bats avoid radar signals. One explanation is that radar energy warms the bats’ wings “like a kitchen microwave” said Racey. Another theory suggests the bats’ ears heat up, causing them to “hear” the radar signal as a clicking sound.

The research comes a day after the energy and climate change secretary, Ed Miliband, announced a target of the UK producing 31% of its energy from renewable sources by 2020, which includes 3,000 new wind turbines. Racey said that these additional turbines should only be built if they satisfy conservation laws intended to preserve bat habitats, and mounting the radar devices could solve this problem.