Showers make up 25% of water use, says biggest ever study of households

Showers make up 25% of water use, says biggest ever study of households 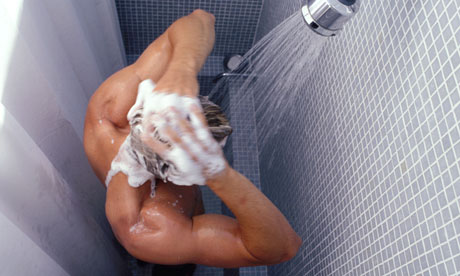 It has become part of our daily routine, although few of us are likely aware of the full financial or environmental costs. Yet showering accounts for the biggest single use of water in the home – one quarter of the massive nine billion litres of water used by UK households every day – with much of our money spiralling down the plughole.

Britons are also unnecessarily inflating their energy bills by overfilling kettles and hand-washing crockery rather than using more energy-efficient dishwashers.

The findings have emerged from the biggest ever study of how Britons use water, published on Thursday, using data supplied by 86,000 British households and commissioned by the Energy Saving Trust.

Showers are by far the biggest consumers of water in the home, consuming 25%, with toilets second at 22%. An average shower lasts seven-and-a-half minutes, yet cutting just a minute off that time would save British households £215m on energy bills each year, the report said. On average, Britons shower 4.4 times a week and take 1.3 baths.

People living in larger households with more people take fewer showers each week but stay in them longer. While a quarter of respondents have efficient eco-showerheads installed, a similar proportion have high-flow – and wasteful – power showers.

The study revealed that 22% of household water is used in the kitchen, with washing machines, dishwashers, kettles and taps all taking their share. Ninety-five percent of people boil the kettle every day and 40% do so five times a day or more. However, three-quarters of households still boil more water than they need – with overfilling costing £68m a year in aggregate.

The average British household washes dishes by hand 10 times a week and only uses the dishwasher three times a week. But larger households could save energy and water by using an efficient modern dishwasher rather than washing by hand, says the trust. Households use their washing machine on average 4.5 times each week, yet only a quarter choose to wash at 30C or less.

Andrew Tucker, the trust’s water strategy manager, said: “When people think of energy use they think of heating and lighting, running electrical appliances or filling the car with petrol. It’s all too easy to turn on the tap and not think about the consequences. But there is an environmental and energy cost attached to water which many people do not consider.

“On average, hot water use contributes £228 to the average annual combined energy bill. It’s clear that we are all using more water-consuming appliances regularly, especially showers, but that doesn’t mean we’re powerless to control our water use.”

The research was carried out in partnership with Defra, Procter and Gamble, Thames Water, the Consumer Council for Water and SaveWaterSaveMoney.