Can you believe it? The Future Fund – our $117 billion sovereign wealth fund –  has refused to meet with farmers whose livelihoods are directly affected by the fossil fuel companies it invests in!

A few weeks ago, Liverpool Plains farmers Derek and Kirrily Blomfield asked you to join them in calling on the Future Fund to divest from fossil fuels. Their land is threatened by the massive proposed Caroona Coal mine, owned by BHP – a company that the Future Fund has almost $1 billion invested in.

Since then, Derek and Kirrily, together with farmers and former fossil fuel workers, have asked to meet with the Future Fund and share their stories. The Fund responded by rejecting the request to meet.

Click here to tell the Future Fund to stop ignoring the community and start divesting from fossil fuels.

Meanwhile, within two days of the Future Fund divestment campaign launching, Future Fund chairman Peter Costello hit back in the Australian Financial Review – vowing that his Fund would never divest and stating that he would “not rule out fossil fuel companies on the grounds that we don’t like fossil fuels.”

This is about as backward as you get in the investment world. Typically, investors pride themselves on engaging with external stakeholders, even when they continue to invest in climate catastrophe. Investing in fossil fuels is bad enough. Refusing to engage with the community is a whole new level of ridiculous.

Click here to tell the Future Fund to say YES to community and climate protection and NO to fossil fuels.

And the first step towards that is talking to the communities who are affected most, people who face fossil fuel’s impacts on a daily basis.  Good, honest, hardworking people like Liverpool Plains farmers Derek and Kirrily. The Future Fund’s investments directly affect their future. The affect their two sons’ future. They affect all of our futures.

Join us in telling the Future Fund to divest from fossil fuels and invest some time in listening to the communities who are bearing the brunt of their bad investment decisions.

Yours for a brighter future,

Charlie for the 350 team 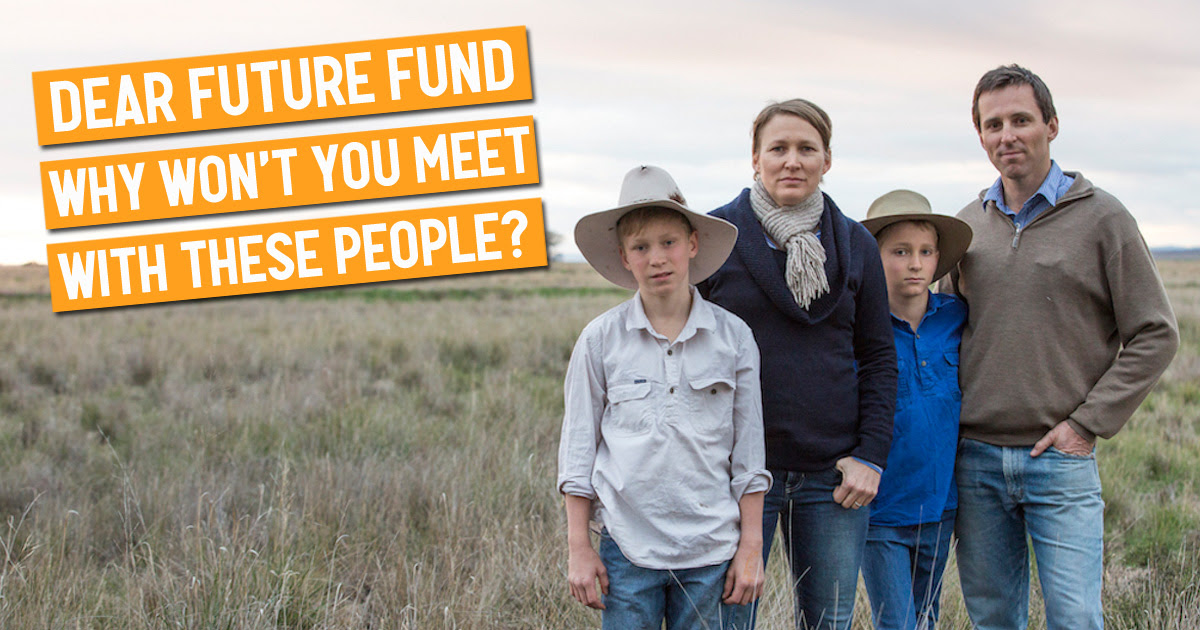 350.org is building a global climate movement.You can connect with us on Facebook, follow us on Twitter, and become a Climate Defender and donate monthly to help 350.org keep Australia’s fossil fuels in the ground.