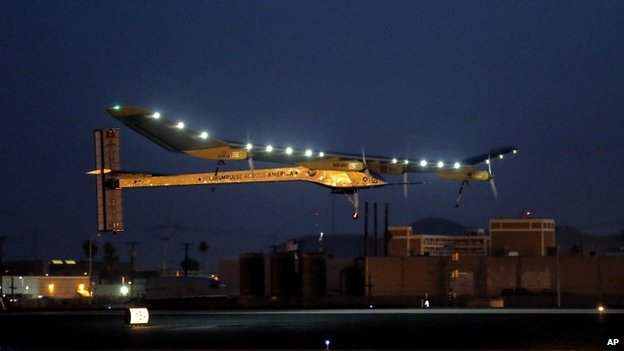 The Solar Impulse solar-powered plane has set off on the second leg of its trans-American journey.

The craft will also stop over in St Louis and Washington DC before heading to New York in early July.

It has the same wingspan as an Airbus A340 but at a weight of just 1.6 tonnes, its backers hope to show off the capabilities of renewable energy.

By comparison, a fully laden A340 weighs about 370 tonnes.

The Across America bid is the first cross-continental flight of a solar-powered plane.

It is the last showpiece with the prototype aircraft before the Solar Impulse co-founders and pilots, Bertrand Piccard and Andre Borschberg, attempt a trans-oceanic flight and an eventual around-the-world flight in 2015.

The plane’s wing and stabiliser are covered with nearly 12,000 solar cells, which drive its four propellers and charge the plane’s 400kg of lithium-ion batteries for night-time flying.

The plane completed its first leg, between San Francisco and Phoenix in early May, in a flight lasting 18 hours.

The two Swiss pilots will alternate on different legs of the journey; Wednesday’s flight, due to last about 18 hours, is being piloted by Andre Borschberg.

The Across America bid coincides with the pair’s Clean Generation Initiative, an effort to encourage policy-makers and businesses to develop and adopt sustainable energy technologies.

Labor ‘tricked’ on plan to phase out coalPrev
Once again the ABC and SBS are under attack.Next