Spain rail crash: why was train travelling so fast on bend?

“This highlights the need for electronic sensors on HSR rail lines to detect the speed of HSR trains and either slow them down or bring them to a stop if necessary. The rail line did not appear to have been suitable for high speed rail. The role of the guard must also be determined, he should have realised the speed and warned the driver. We must take heed of this in any proposals to introduce HSR tyravel in Australia”

Spain rail crash: why was train travellingso fast on bend?

As death toll rises to 80, questions asked about how train was allowed to travel at up to twice the speed limit

Link to video: Santiago train crash: Spanish PM visits site of derailmentAs Spain mourned the 80 dead in Europe’s worst rail crash this century, questions were being asked about how the train had been able to hit a tight curve at such a speed that it spun off into a concrete security wall.

Analysis of video of the accident in the northern city of Santiago de Compostela suggested the train was going faster than 85mph on a bend where drivers are supposed to slow down after a straight stretch that allows them to reach up to 125mph.

“We were going strongly when we got into the curve,” one driver was reported to have admitted shortly after surviving the accident on Wednesday, which killed more than a third of the passengers and left 168 injured.

A spokeswoman for the Galicia supreme court said the driver, who was only slightly injured, was under investigation.

The man, who has been named, is not believed to be under arrest but is expected to face questions from a judge with access to the train’s data recording black box.

While trapped in the cab, the driver was reported to have given an account over the radio to officials at Santiago station. He was quoted saying, “I hope there are no dead because they would fall on my conscience” and having repeated over and over: “We’re human. We’re human.”

Rail safety experts said such accidents are usually the result of more than one failure, and questions will inevitably be asked about how warning signals about the train’s speed were not picked up and acted on.

On Thursday evening the death count looked set to creep up, with 36 of the 95 victims in hospital said to be in a critical condition.

The Foreign Office confirmed that one Briton was among the injured.

The Spanish prime minister, Mariano Rajoy, who is from the crash city, toured the scene alongside rescue workers and went to a nearby hospital to visit the injured and their families.

“For a native of Santiago, like me, this is the saddest day,” said Rajoy, who declared Spain would observe a three-day period of mourning. He said judicial authorities and the Public Works Ministry had launched parallel investigations into what caused the crash.

Link to video: Santiago de Compostela train crash: CCTV captures moment of derailmentEyewitness accounts backed by security camera footage of the disaster suggested the eight-carriage train was travelling at high speeds as it took the pronounced left-hand curve through a deep culvert.

The speed limit on that section of track is 50mph, and locals said that trains often creep through, as the station is just a short way down the tracks.

The leaked video footage, which railway authority Adif admitted must have come from one of its cameras, shows the front engine and train carriages buckling as they enter the turn.

Professor Roger Kemp, of the Royal Academy of Engineering, said a derailment would be expected at high speeds on such a curve.

“The big question is why the train was running at more than twice the speed limit. There must have been at least prominent visual warnings to reduce speed, if not audible warnings and an electronic speed supervision system,” he said.

Francisco Otero, who lives near the crash site and is a relative of a woman who was a passenger, told the Guardian that she had said the train was going too fast. 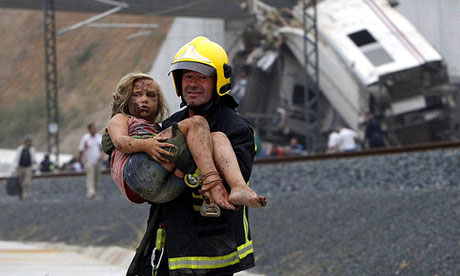 A firefighter carries an injured girl from the wreckage of the train crash near Santiago de Compostela. Photograph: AFP/Getty Images”Until then I thought that it had been terrorist attack,” Otero said. “But it was one of the first things she said.”

One of the survivors, Sergio Prego, told Cadena Ser radio station that the train “travelled very fast” just before it derailed and the cars flipped upside down, on their sides and into the air.

“I’ve been very lucky because I’m one of the few able to walk out,” he said.

Forensic scientists are still trying to identify the most mutilated corpses. Groups of families and friends gathered at the city’s Cersia hospital waiting for news of loved ones – though there was little chance they were alive as all survivors had been identified and their families informed.

“It’s a major challenge to identify the people who have died,” Rajoy said. “Unfortunately, in many cases, this isn’t easy, but we are very conscious that the families cannot live in a state of uncertainty.”

The Alvia 730 series train started from Madrid and was scheduled to end its journey at Ferrol, about 60 miles north of  Santiago.

Alvias do not go as fast as Spain’s AVE bullet trains, but still reach 155mph on AVE tracks and travel at a maximum of 137mph on normal gauge rails.

The accident came a day before a public holiday in Galicia: the feast of St James, after whom the region’s capital Santiago is named.

“24 July will no longer be the eve of a day of celebration but rather one commemorating one of the saddest days in the history of Galicia,” said Alberto Núñez Feijóo, the region’s president.

Residents of the semi-rural neighbourhood by the accident site struggled to help victims out of the toppled cars on Wednesday night. Some passengers were pulled out of broken windows as rescuers used rocks to try to free survivors from the wreckage.

Get the Guardian’s daily US email

Our editors’ picks for the day’s top news and commentary delivered to your inbox each morning. Enter your email address to subscribe.

Is it greener to travel by rail or car?Prev
No right to defend against sea for sea-side property ownersNext