Everyone’s a pacifist between wars. It’s like being a vegetarian between meals

A fable for our time.

Putin’s Line in the Sand: No Regime Change in Syria

Russia, Iran and Hezbollah are prepared to defend their ally Assad and stop Washington. Otherwise the US will have succeeded in destroying another sovereign nation and scattering its people across the Middle East and Europe.

Does Putin Have a Plan for Syria?

Russian troops already engaged in battle against ISIS around Homs

Contrary to the impression conveyed by Moscow that Russian troops in Syria are not engaged in combat and that none of the sophisticated arms deliveries were destined to the Syrian army.

I have to say that I am changing my tune.  Not only because there can be no doubt whatsoever that Assad and his military are currently the only force protecting the Syrian people from the medieval insanity and viciousness of Daesh, but because the man impresses me more and more.

Tracking the inferno: where wildfires are hitting California and other states hardest

Five “megafires”, an official term for fires that span more than 100,000 acres

A Sense of Despair Is Sweeping Through Iraq

Omar is one of a tidal wave of Iraqis trying to get out of Iraq as the war continues and insecurity grows worse. Kidnapping is rife in Baghdad, with victims ranging from three-year-old children to the deputy Minister of Justice. Eighteen Turkish construction workers were abducted by a Shia militia and moved to Basra without the government being able to do anything about it. In addition there are daily bombings by Isis which a multitude of government checkpoints fail to stop.

Greece through the eyes of the homeless

A homeless woman was given a camera and asked to document life on the streets of Athens.

The OPEC oil-producing states, including Iran, through the skilful mediation of Russia, are carefully laying the foundations for a truly new world order. What is likely to emerge in the current extraordinary situation is a negotiated arrangement between Russia and the OPEC oil producers to devise a new ordering of world energy supply, independent of Anglo-American domination. The benefits are simply too great for all involved parties to ignore. It would provide Russia safe markets outside the Anglo-American current war zone, and the oil producing countries of the Middle East would join as central parties to the unfolding economic boom that is emerging out of new Economic Silk Road rail and sea port infrastructure projects.

Prof. Peter Wadham’s discussion of the Arctic and his prediction for total ice loss quite soon

You may be particularly interested in watching the dynamic changes to the jet scream at 10-12 minutes. 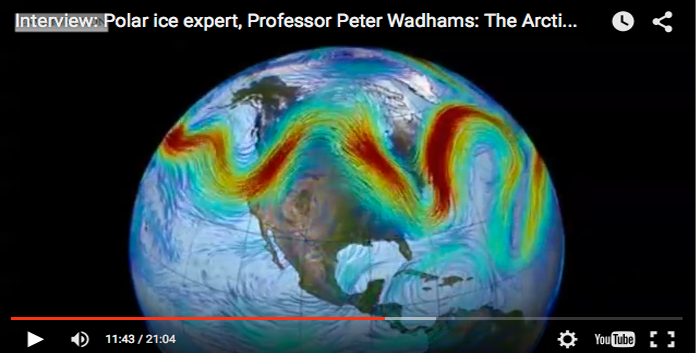 Politicized youth organizations on both ends of the political spectrum are becoming more vocal, violent and popular.

It’s a delusion to call this situation a migration crisis; it is a massive migration of nations, with inexhaustible reserves.

Glazyev is in favor of forcing Russian companies that have Western loans to default. Predictably, some sectors of US  went bonkers, stating with utmost certainty that “the Russian energy sector would not be able to find much financing without connections to the West.” Nonsense. Russian firms would easily find financing from Chinese, Japanese or South Korean sources.

Russia  miscalculated that diplomacy could solve the crisis that Washington created in Ukraine and placed its hopes on the Minsk Agreement, which has no Western support whatsoever, neither in Kiev nor in Washington, London, and NATO. Russia can end the Ukraine crisis by simply accepting the requests of the former Russian territories to reunite with Russia. Once the breakaway republics are again part of Russia, the crisis is over. Ukraine is not going to attack Russia. Russia doesn’t end the crisis, because Russia thinks it would be provocative and upset Europe.

New report finds that the Trans-Atlantic Trade and Investment Partnership poses a threat to state regulations against hazardous pesticides, products, and fracking chemicals

The Hidden Meltdown of Greenland

Greenland’s glaciers flowing into the ocean are grounded deeper below sea level than previously measured. This means that the warm ocean currents at depth can sweep across the glacier faces and erode them.

Race against time to save the last white rhinos

On World Rhino Day, the only northern white male left in the world is desperately trying to save his subspecies. and the last hope for saving his subspecies by impregnating his daughter or granddaughter.

In London, the latest figures suggest air pollution now kills more people than smoking. Worldwide it causes more deaths than malaria and Aids together. This is the neglected health crisis of this age, that we seldom discuss or even acknowledge.

Fossil fuel divestment booming, with $2.6trn in assets set to be dumped

Since starting on the campuses of a few colleges in the US, this movement has struck a chord with people across the world who care about climate change, and convinced some of the largest and most influential institutions in the world to begin pulling their money out.

The announcement is intended to show international governments that there is broad-based business support for going off fossil fuels in advance of the UN climate talks in December. Goldman Sachs, Johnson & Johnson, Proctor & Gamble, Salesforce, Starbucks, Steelcase, and Voya Financial took the RE100 pledge, organized by the Climate Group.

“Research shows that companies have seen a 27% return on their low carbon investments,”

The Character Assassination of Jeremy Corbyn

The mission of the media is simple: to kill him off before any serious policy debate can take place.

Guadalupe is one of a handful of towns in the 55-mile Juárez Valley, along the Rio Grande. The region was a hub of cotton production in its heyday. But these days, Guadalupe is a ghost town,