It is in the region of ignorance that tyranny begins.

At a conference in Canberra the scientists I spoke to were all of the one opinion, that methane, not C02, is the most to be feared. There are such vast quantities of it that we cannot absorb the impact or sequester it. Life has been made possible on this planet because Nature has hidden most of the methane into its own safe deposit boxes: Both in the land (permafrost) and under the sea (clathrates). In every other mass extinction event over hundreds of millions of years the coup-de-grace has been delivered by the sudden and overwhelming eruption of methane. Once we let this monster out its all over, and quickly on the historical evidence.

To understand our future we need to understand methane. As in the graph below it has never, not even during major extinctions, exceeded 750ppb. In some parts of the upper atmosphere this has now been exceeded twice over. It will take a while for the high levels to be reflected in the climate, and something could still be done to avert a gigantic flaring. As Sam Carana repeats “the situation is now dire and calls for comprehensive and effective action”.

Nevertheless, the days of linear change are behind us. We living in the Age of Abrupt Climate Change. In a later Newsletter I will explore how we could drastically reduce our footprint, and the social and commercial consequences of doing so.

The Methane Monster – Demise of the Arctic

Current spike in methane is off the chart compared to all previous spikes – including the Great Dying of 250 million years ago. This graph is at 17mins into the talk.

Splitting of the Polar Vortex

The disruption of the Jet Stream. As it slows down it splits and oscillates.This dislocates the air masses, tossing the cold air from the Arctic to the south (where it gets warmer) and tropical hot air into the Arctic (where it triggers methane release). In January it produced horrific cold winter in the central US and simultaneously a 20C winter heatwave in Siberia. The surges of cold and hot air are marked in picture. View from 28 mins on.

Unexpected methane release from Antarctica and the temperature anomaly.

The surge comes from the very volatile nature of methane. First shows the temperature. The second the surge in methane which has continued even though the temperature has dropped. This is essentially the same chart as the first one. View at 45 mins.

And the methane “BOOM” is on the right: 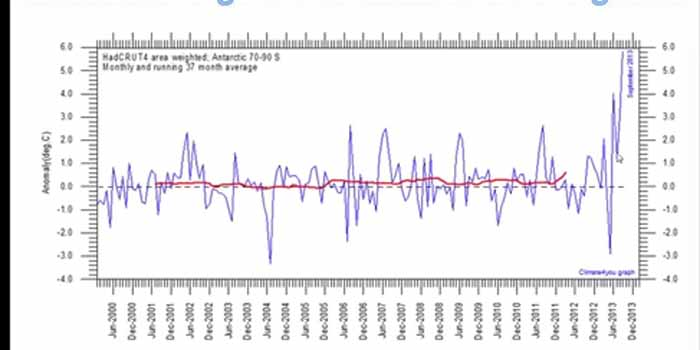 The discussion on methane is continued in these pieces. It is in the forefront of most informed people, but almost totally absent in the press. Sad, but an integral part of the problem.