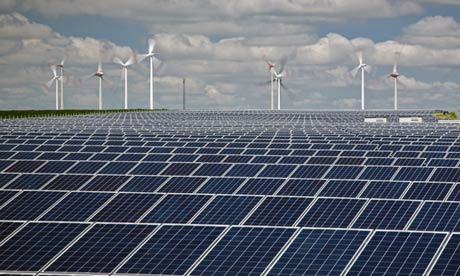 A trial of the largest battery in Europe, which proponents hope will transform the UK electricity grid and boost renewable energy is due to start in Leighton Buzzard, Bedfordshire.

The trial of cutting-edge energy storage technology will test new methods of capturing electricity for release over long periods, evening out the bumps and troughs of supply and demand that plague the electricity grid. Finding ways of storing power from wind and solar generation is key to maintaining a constant source of energy.

But storage technology has been difficult to translate from small devices such as batteries and laptops to the enormous scale needed to balance demand and supply on the national grid.

At the electricity substation serving Leighton Buzzard, three companies are hoping to deploy one of the biggest batteries ever constructed, using lithium manganese technology. The £18.7m project will form the centrepiece of a trial of energy storage that could have far-reaching implications for the renewables sector. The three companies – S&C Electric Europe, Samsung SDI and Younicos – have gained £13.2m backing from the UK taxpayer for their 6 megawatt capacity battery installation, which will absorb and release energy to meet the demands of the grid. The first results are not expected until 2016.

Andrew Jones, managing director of S&C Electric Europe, said that Leighton Buzzard had been chosen as it had the necessary infrastructure to hold the trial, including good grid connections and capacity for a large scale battery installation. He said: “The major grid challenges from the UK’s decarbonisation can be met through energy storage’s inherent ability to reinforce the network. But currently there are limited large-scale energy storage projects here, leaving a confidence gap. This practical demonstration promises to show the strengths and limitations of storage and unlock its potential as a key technology for the transition to low carbon energy.”

If successful, the battery technology and networking knowhow that goes along with it will be spread around the world. The UK alone could save £3bn a year in the 2020s through large scale energy storage, according to research from Imperial College London.