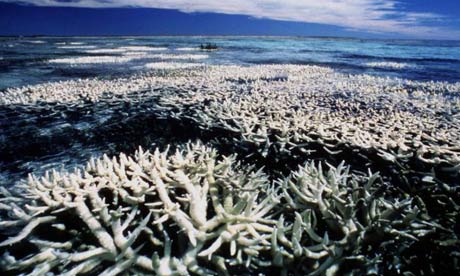 A UN report has urged Australia to ensure expansion of ports doesn’t damage the ‘outstanding value’ of the Great Barrier Reef. Photograph: Reuters

The Great Barrier Reef will be listed as a threatened ecosystem by the United Nations from June next year unless the government follows a series of recommendations to protect it, the World Heritage Committee has decided.

The committee, meeting in Cambodia, largely stood by a draft report it released in May, which noted “concern” at the “limited progress” in halting coastal development and other threats to the reef.

A separate committee concern over the “lack of clarity” around water quality was amended, after the federal government pledged $200m in the May budget for the continuation of its “reef rescue” program, which aims to reduce the amount of agricultural chemicals flowing into the reef.

The government has also produced, as the committee requested, an updated “scorecard” on the reef.

However, the rest of the committee’s draft report findings were passed at the Cambodia meeting, effectively putting the government on notice that the Great Barrier Reef will join Unesco’s “in danger” list at its next annual meeting if improvements are not made.

The committee is concerned that the Queensland and federal governments have made “no clear commitment toward limiting port development to existing port areas”. The report also urges Australia to ensure that the expansion of existing ports does not damage the “outstanding universal value” of the reef.

More than 150 Australian and international scientists signed a letter on the eve of the World Heritage meeting calling for urgent action to safeguard the reef.

Critics claim proposed expansion of coal and gas export terminals, such as at Townsville, and new major new export developments, such as Abbot Point, will hurt coral, turtles, dugongs and other wildlife through increased shipping and waste from dredging.

Meanwhile, the Queensland government, which has previously referred to itself as being “in the coal business“, has also attacked the federal government for being too closely aligned to green groups and risking jobs and investment to the state.

Tony Burke, the federal environment minister, said he was pleased that the committee had recognised progress that Australia had made on managing the reef.

“The Great Barrier Reef is an iconic environmental asset and the Australian government is absolutely committed to the protection of the reef and our oceans. It’s one of the most precious places on Earth,” he said.

“I am pleased that the final report takes into account more recent commitments by the government to safeguard the reef including a further $200m for the next stage of Reef Rescue.

“The Australian government is also pleased that the decision recognises the progress Australia has made on the comprehensive strategic assessment, including important new research which will help ensure that the reef is protected in accordance with the best available science.

“There are a number of threats facing the reef, including climate change, coastal developments, agricultural runoff, ocean acidification and outbreaks of the crown-of-thorns starfish. We are working to address each of these, on land and in the ocean.”

A spokesperson for Greg Hunt, the shadow environment minister, said that an incoming Coalition government would focus on reducing the pollution that damages the reef.

“We welcome the acknowledgement of the improvements in water management on the reef,” the spokesperson said. “It is an important responsibility of the Australian government and in that context it was disappointing that Minister Burke had delayed the re-commitment to the Reef Rescue funding.”

“If elected, the Coalition will implement a Reef 2050 plan with a focus on water quality and increased action to address run-off and the subsequent threat posed by the Crown of Thorns.”

Greens senator Larissa Waters, whose bill to halt new developments beside the reef was rejected by the government, said that urgent action was now needed to avoid the ‘in danger’ listing.

“The old parties are letting the big mining companies treat the Great Barrier Reef as a dumping ground for dredge spoil and a shipping super highway and the world is watching and sending a clear warning that this is simply unacceptable,” she said.

“The Queensland and federal governments now have a year to act on the World Heritage Committee’s recommendations to save the Great Barrier Reef from being added to the list of sites in danger.”