Paniyiri President Chris Kazonis was particularly proud of the community spirit displayed at the festival.

“All the staff on the park are volunteers, there is not one paid person on the ground,” he boasted to The Westender. Some of the uniformed barristas serving coffee in the various food stands may have been disappointed to hear that, but we do not want to dampen the general high spirits of the day by splitting hairs.

The commercial strip along Edmonstone Street outside the Greek club boasted solar providers, internet directories and toy stores along with the obligatory food stalls. Inside the Greek club a rolling cooking demonstration with full blown TV cooking contest presentations kept hundreds entertained and well fed as the day rolled on. 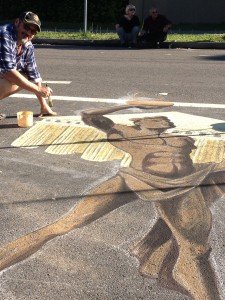 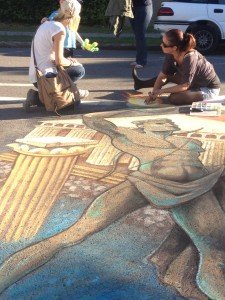 Among the attractions this year is a sizable piece of chalk art by pavement artists Amelia and Dom. Talking to Westender this afternoon, Dom said that Amelia is the artist and his job is merely to lay down some of the foundation. Westender will return tomorrow to meet Amelia and see how she is filling in the remainder.

In addition to the frenzy of Zorba music, burning souvlaki and deep-fried loukoumathes a cultural program in one of the meeting rooms at the Greek club, featured lectures on images of femininity in wartime, the journeys of Odysseus and other weighty topics.

The Greek economic crisis had just reached fever pitch during last year’s Paniyiri and was further marred by the nasty eviction of the indegenous tent embassy to make way for festivities.

Images of five rubber-gloved police wrestling an Aboriginal man to the ground prompted a wave of protest and satire, including the picture postcard story – Paniryi Irony

For the thousands of festival goers, though, Paniyiri is about indulgence and satisfaction to the sound of Greek dance music. There was an almost endless supply of that to go around.