What happens to a house when the water drains away?

What happens to a house when the water drains away?

About 6,500 homes have been flooded in the UK since December. But what happens to a house when the flood water recedes?

For many flood victims, it’s when the water goes down that people hit rock bottom.

“All the initial bonhomie and community cohesion goes and people are confronted with the harsh reality that their home has been badly flooded,” says Mary Dhonau, who became a flood consultant after her home was flooded in 2000.

It’s also when the “real work starts”, she says.

For those that are insured, there’s a process which is “project managed” by a loss adjuster, according to Graeme Trudgill, executive director of the British Insurance Brokers’ Association. For those that aren’t, they will still follow a similar process, but might manage it themselves.

A loss adjuster will assess the damage, arrange alternative accommodation for flood victims when necessary, and plan the restoration process.

Some tips on clearing up afterwards

“They’ll look at what needs repairing and replacing – it might be skirting boards, plastering – get the gas and electricity supplies checked. Then the next step will be to remove the silt and debris, strip it out, disinfect the affected areas and dry the property out,” says Trudgill.

Tradesmen such as electricians, plumbers, builders and cleaning experts will be appointed for different tasks.

Trudgill says the drying out is often the most time-consuming part of the process because some moisture can be deep-seated. “Specialists use drying machines, but it can take weeks or months to extract. If you redecorate too soon, mould can come through,” he says.

When the property is finally dry, reconstruction work can begin.

Property owners often try and make their home more resistant to future flooding. Hard floors might replace carpets. A wooden skirting board could be replaced with a plastic board or aluminium might be opted for when installing a new kitchen unit.

The Association of British Insurers outlines what people can expect from their insurer after a flood. But what are the essential things to consider when restoring a flood-hit house? 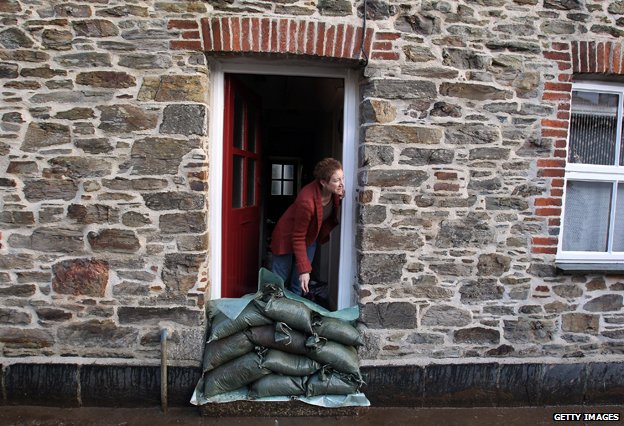 Traditional brick or concrete walls will generally dry out well so long as they are clear for ventilation.

However consultant builder Simon Knight, from Milton Keynes, says the drying out process can take months. Property owners are advised to keep an eye out for cracks in the walls.

And brickwork can still contain moisture even after that. “Bricks can expand and crumble. Or expand and contract. If we get frost over the next few weeks there will probably be a lot of problems with that,” he says.

Wall cavities need to be inspected by an expert to ensure walls are secure and any damaged wall-cavity insulation will also need to be removed.

When it comes to internal walls, damaged plaster, plasterboard and wallpaper will have to go. Holes might also need to be drilled through plasterboards or dry linings to drain trapped water and aid ventilation, according to Knight.

Timber partitions may rot if not dried properly.

Ireland’s Office of Public Works advises people not to redecorate for at least three months after walls have dried and repairs have been done.

“Painting or wallpapering too soon can result in blistering, mould or peeling,” it says. 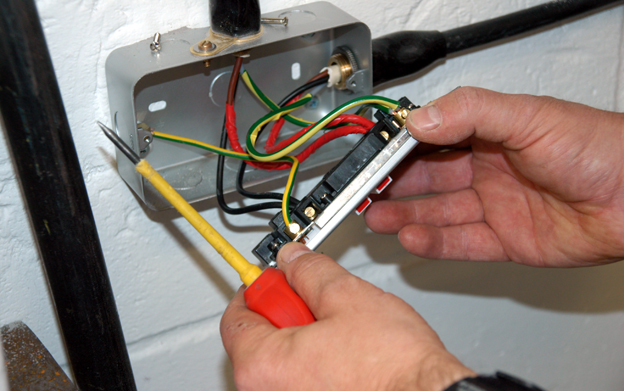 Switching on electricity and gas after a flood can be very dangerous, so it’s important to get services checked by an expert.

Modern wiring can withstand a short period of flooding, but if a property has been flooded for more than a few hours, it will probably need rewiring – downstairs at least.

“My experience of flooding is that if water gets in, it never dries out completely, the plug sockets get saturated and have to be replaced and dampness goes into the cables,” says Knight.

An electrician will also give junction boxes, socket outlets, light switches and ceiling connections a thorough check to ensure there is no water trapped inside them.

Of course it’s not just water that can cause damage.

“My plug sockets had dried poo inside them,” says Dhonau of her 2000 flooding. Raw sewage and surface water rose to about 3ft.

Her Flood Recovery Guide also advises making sure the gas is checked out as the meter, flues or ventilation systems might be damaged, even if appliances appear to be unaffected.

When it comes to rewiring, placing sockets further up a wall can help protect a property from future flood damage. 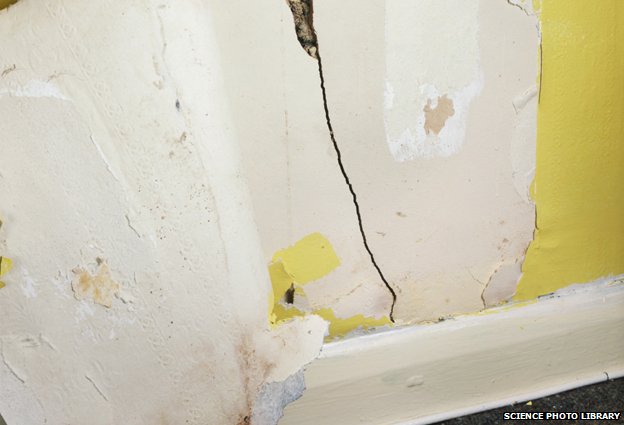 Knight says it’s hard to be sure how solid a property’s foundations are after flooding, as some problems may take years to materialise.

“You need to dig trial holes to see what problems are at footing level. There might be movements of soil swelling and contracting,” he says.

“There is also the possibility of sinkholes,” says Knight.

Signs to watch out for are cracks and general movement in the building, but both can often remain undetected for some time.

“One property I dealt with had subsidence five years after a flood, another six years. I’d say two of the 12 flooded houses I’ve worked on have had it, so that’s nearly 20%,” he says.

Other indicators of structural damage include buckling of walls, bulging or dislodged sections of property and new cracks above windows or doors. 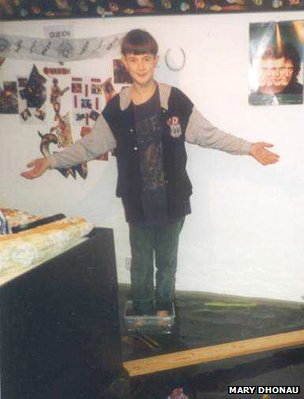 When a property’s been flooded, floor coverings such as carpets will have to come up. Dhonau advises people to cut off a small piece of carpet and underlay and put them in a plastic bag to show insurers.

Tiles will also have to be lifted to check whether water has seeped underneath.

Laminate flooring panels are also likely to have swollen and “sprung” up from the floor so will need to be removed. It’s unlikely that they will be able to relaid, even once they have dried out, according to Dhonau.

“If floor joists show signs of rot they’ll also need to be replaced, treating the surrounding area to prevent spread,” she says.

Insulation materials that have become wet should also be removed, disposed of and replaced.

For those that are concerned about whether there is moisture in their floor, the best way to test it is to use a meter, according to insurance company Aviva. It says the safe moisture level for softwoods is 18%. 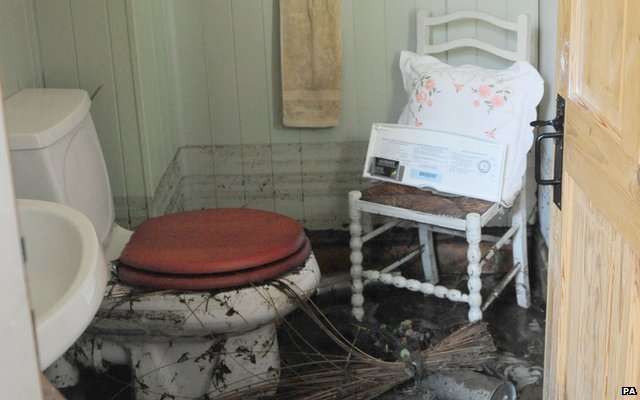 Mains supply water should not be affected by flooding but it’s worth calling the local water company and checking that silt hasn’t entered the system and insulation on pipes has not been saturated.

Drains and sewers are rarely damaged by floods, but they may become blocked and “back up”.

Of course if a toilet or bathroom has flooded a plumber will probably be needed. 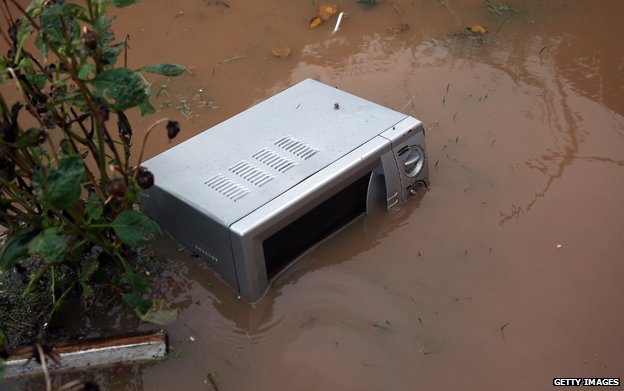 But not everything that appears to be broken will be beyond repair. Restoration firms will employ damage control. A wet laptop might not switch on but have salvageable data. A business might have damaged packaging, but the stock might be fine, says Trudgill.

Solid wood furniture can often survive a soaking, especially if drawers are removed to accelerate drying.

The Flood Recovery Guide suggests if mildew has formed, scrub the wood with four to six tablespoons of baking soda to a gallon of water, before rinsing and allowing to dry.

To test if material is dry, it recommends taping clear food wrap to its surface. If the covered section turns darker than the surrounding material, it is still damp.

Dhonau says don’t dispose of items unless the loss adjuster has agreed to it or it might affect a claim.

“Then use common sense to collect evidence of what they were, such as jotting down the make and serial number of things like televisions, as well as taking photos and videos,” she says.

She also advises people to take a notebook “absolutely everywhere”.

“Write down who you’ve talked to, what they said, at what time. At the end of the day, you are project managing a building site, which is also your home,” she says.

[New post] Redcliffe results wrap The Tally RoomPrev
A Rough Guide to the Jet Stream: what it is, how it works and how it is responding to enhanced Arctic warmingNext