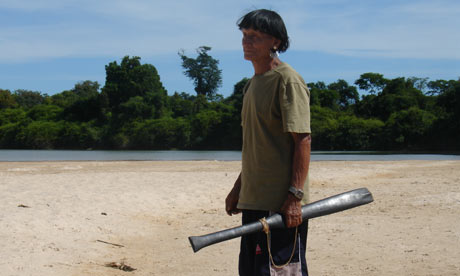 Activists say government plans for up to 16 new hydroelectric plants pose an unprecedented threat to the 14 tribes that live in the park. Photograph: Tom Phillips

Once they were threatened by wildcat gold-miners and a measles epidemic that slashed their population to just 56. But now the Ikpeng, a proud tribe of Amazon warriors, say a new catastrophe looms over their future: the damming of the rivers they depend upon for food.

Across Brazil alarm bells are ringing over plans to build at least 229 small hydroelectric dams, known as PCHs, which the government hopes will generate electricity and drive economic development.

Opponents say they will damage the environment and destroy the livelihoods of thousands of Brazilian tribespeople.

There are 346 PCHs in Brazil, with another 70 under construction and 159 awaiting licences. If the construction of dams continues, “the fish will run out and the waters will start to go down,” warned Komuru Txicao, a local tribesman. “Here in the forest we don’t need electricity. We need fish, water and land.”

Other hydroelectric projects planned by the government are huge — the $4bn Belo Monte dam further north along the Xingu river from Pavuru would be the third biggest plant of its kind on earth, producing over 11,000 megawatts of electricity. While Belo Monte has been described by the government as a “gift from God”, critics say it will destroy lives, homes and traditions.For Komuru and his neighbours, the immediate concern is the construction of a network of PCHs around the Xingu national park in Mato Grosso state. Komuru fears the dams will block the tributaries of the Xingu, itself the largest tributary of the Amazon.

According to the National Electric Energy Agency (Aneel), four PCHs – the Paranatinga II, Culuene, ARS and Ronuru – operate near the reserve; another, Paranatinga I, is waiting for its licence. Aneel says 13 PCHs are being built in Mato Grosso state, while another 19 projects are awaiting licences. The government says such dams will help power the agricultural revolution that is sweeping Brazil’s mid-west and bring electricity to small towns.

Recent years have seen the Ikpeng, a proud tribe of Amazon warriors, embrace many of the comforts and distractions of the outside world.

Three months ago wireless internet was installed here in Pavuru, one of over 30 villages located in the Park — a vast, 2.8 million hectare indigenous reserve home to some 5,000 Indians from 14 different ethnic groups. Today Ikpeng teenagers spend their afternoons downloading tracks by artists such as Enrique Iglesias and the US rapper 50 Cents while many of the tribe’s hunters use shot-guns rather than the traditional bow and arrow to hunt spider monkeys and wild-boar in the surrounding forests.

Several of the traditional huts – or owros – also shelter large television sets, powered by a diesel generation which is switched on at 9am each day and turned off at 9pm.

But unlike the telenovelas and MP3s, government plans for PCHs around the Xingu Park have met with a furious reception.

“It is very worrying,” said Kumare, a resident who is the local head of Funai, Brazil’s indigenous agency. “This will directly affect us. They are damming all of the rivers.” Kumare said the dams would make it impossible for the fish to migrate upstream thus decimating the main source of food for the reserve’s Indians.

Last March the conflict escalated when eight staff from the electricity company responsible for one PCH spent five days held “hostage” near Pavuru. They were released only after the president of Brazil’s indigenous agency, Funai, personally intervened. “We didn’t kill them, we ‘arrested’ them,” recalled Komuru.

Similar battles are raging across the Amazon region, where plans to build roads, hydroelectric dams and other major infrastructure projects have triggered a conflict between those who want to protect the world’s largest tropical rainforest and its indigenous tribes and those wishing to drive development and relieve poverty. A dispute over the Belo Monte dam turned violent in May when an engineer from the Brazilian power company Eletrobras was attacked during a presentation about the plant. President Luiz Inácio Lula da Silva has sought to allay fears over the dam, vowing that it “would not be shoved down anyone’s throat”.

But concerns grew in July when a federal court lifted an embargo on the Belo Monte licensing process, clearing the way for a bidding round later this year.

AGL to develop renewable energy projects.Prev
Men- not the only greensNext