Last week brought disappointing news for all of us who want to see solar and renewables thrive. The Renewable Energy Target is sinking in political quicksand and despite the efforts of thousands of supporters across Australia, there’s no rescue in sight from Canberra.

The latest offer on the Target – which was a proposed enormous cut from 41,000 gigawatt hours to 33,500 gigawatt hours – was quickly rejected by the Government and the dead end debate continues*.

Solar Citizens all around our nation are telling us they are sick of solar and renewables being used as a political football. While the games are played in the corridors of Parliament, jobs are being lost, investment has ground to a halt and a renewable future is left in the shade.

It’s time to change the conversation. Take the pledge to Stand Up For Solar to help build a force for a strong solar future that won’t be ignored, no matter who is running the country. 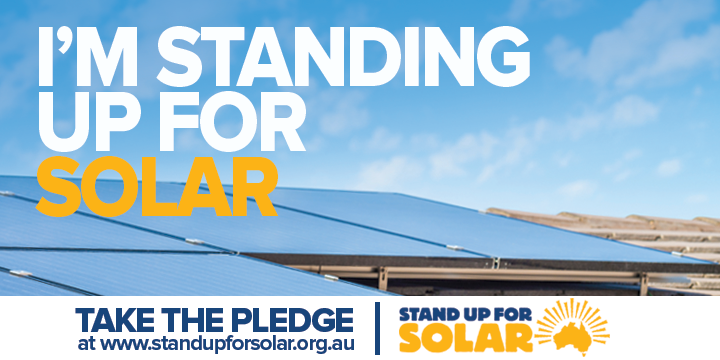 We’re telling you about this campaign first because you’ve told us you want to see a positive plan for solar owners and a solar future. We want to see:

See the full plan and add your name to the pledge to Stand Up For Solar today.

We know that there’s 1.3 million solar homes out there – and there are 3,500 new systems going on rooftops every single week. We know that poll after poll tells us more than 75% of Australians want to see more solar and renewable energy, not less.

But we also know that it takes more than polling data to convince a politician. Our representatives pay attention when people show them what’s at stake in their communities – so it’s up to us to show them that millions of Australians are prepared to Stand Up For Solar.

There’s more than 60,000 Solar Citizens like you who can help spread the word to those 1.3 million solar households – take the first step by taking the Stand Up For Solar pledge on our new campaign website and tell your friends using our handy sharing tools.

We have an exciting campaign planned with events and activities set to take place all over the country in the coming months – we can’t wait to get out there and see people all over working on the vision for a strong solar future.

So take the pledge today and make sure you ask your friends, neighbours and workmates to do the same.

Let’s win this for solar and for Aussies everywhere.

For sunshine, every time,

PS. It’s only by reaching more solar supporters like you that we can win a sun-powered Australia. We know Solar Citizens are the best people to spread the word far and wide, so sign the pledge today, and make sure you share with friends and family who care about our solar future.